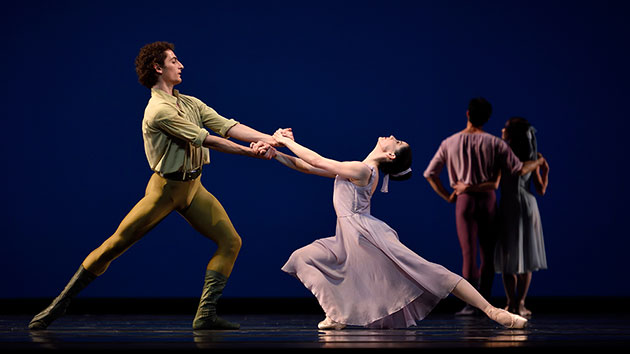 A double bill at San Francisco Ballet was the perfect way to view two great pieces through a fresh lens. Jerome Robbins’ Dances at a Gathering, set to Chopin, followed Tuesday night by Liam Scarlett’s Hummingbird, to Philip Glass, are both beautiful in myriad ways. But not the least of them, it develops, is their heartfelt depictions of community and the individuals, and couples, and groups, who live – and dance – within.

Chopin’s piano music is the spur for the suite of dances Robbins created in 1969 for the New York City Ballet. He made a pas de deux for Edward Villella and Patricia McBride, and then, encouraged by George Baanchine, just kept right on going until he had an hour-plus of solos, duets and ensembles.

San Francisco Ballet’s last Gathering was in 2003. The new revival comes across as human, alive, and juicy. We’re outdoors under the bluest of skies, feeling, from the music and the lightness of the movement, as if we’re at some festive gathering, perhaps a wedding in Poland. The celebrants are wearing Green, Pink, Blue, Yellow, Mauve, Brick, Brown, and Purple. That’s how they are listed in the program -- quite helpful.

The trick is to make it all look effortless. The dance moves are sometimes from the vernacular; the choreography, paradoxically, is extremely specific. And then something spectacularly magical happens – for instance Mathilde Froustey (amazing as Yellow), chased by Vitor Luiz (Brick) soaring through the air, ending up inverted in his arms. Equally amazing, more quietly so, were Froustey’s elegant feet, the beauty of each step. There were lots of those breathtaking and fanciful lifts and flights, by the way—a bit like Marc Chagall’s paintings run amok. Among the gallant lifters were Carlo di Lanno (Green) and Davit Karapetyan (Purple).

The trick is to make it all look effortless. The dance moves are sometimes from the vernacular; the choreography, paradoxically, is extremely specific.The cast was stellar and the stories in this allegedly plotless ballet were loud and clear. Lorena Feijoo (Green) flirted, feigned indifference, and was in turn left amusingly bereft. Dores Andre and Steven Morse (both Blue) were sunny and bright. There were male rivalries, clusters of female confidences, a captivating, flirtatious duet for Karapetyan and Vanessa Zahorian (Mauve), a flurry of perfect spins for Luiz, and, in a vital role, Joseph Walsh (Brown), who sets the entire ballet in motion by simply walking across the bare stage, remembering that celebratory day.

As the piece ends, the entire cast gathers and he touches the earth. It’s a reminder of where they were, the way they were, if you like. They join hands and bow not just to each other, but to what they do. It reaches beyond the moment, making the celebration eternal. A bow to stagers Jean-Pierre Frohlich and Jenifer Ringer Fayette, City Ballet alumni both.

Hummingbird’s community is of a different feather entirely. Set to Philip Glass’s Tirol Concerto for Piano and Orchestra, with pianist Brenda Tom, and conducted by Martin West, the music feels as capricious as the bird’s behavior seems. The choreography, however, takes fairly direct aim on relationships via three duets and a corps to underscore them.

Scarlett creates a quasi-playful, quasi-dangerous duet for the first couple (Frances Chung and Gennadi Nedvigin), stunning in its knifelike kicks and off-center balances, and charming in its good nature. The second couple (Yuan Yuan Tan and Luke Ingham), is given to deep and searching moves, strong but wreathed somehow in sorrow. Anyone who’s spent time watching Tan, here wearing white, might feel more than a whisper of Swan Lake, her ballet triumph, from her swanlike grace as well as from their fugitive despair. The third couple strikes a more neutral tone, nicely limned by Maria Kochetkova and Joan Boada. The underlying complexity of the partnerships is nicely reflected in the scenic and costume design by John Macfarlane, lit by David Finn. The shirtdresses, for principals and corps women, are deceptively square-looking; they cling where they’re supposed to.

A grey-and-beige streaked drop (it looks like a window shade) hangs a couple of feet above a ramp. There’s a space between it and the ramp so that the dancers can arrive atop the ramp and then walk or dance or slip down it to arrive on the stage. The ramp can make the dancers’ descent easier, or make it more difficult. It’s all a matter of design.