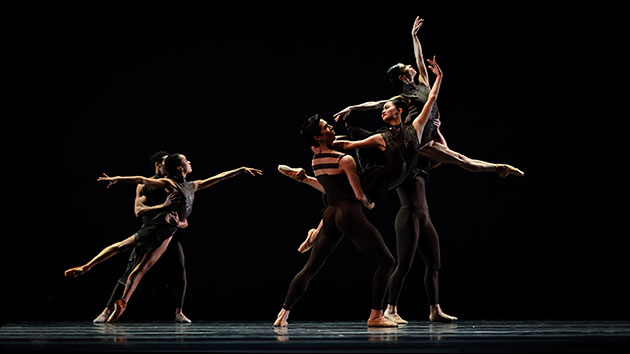 The premiere of Manifesto, set to two Bach excerpts, from The Musical Offering and the Goldberg Variations, was as questing, and as interesting, as a work by any talented 24-year-old might be. This one, by Miles Thatcher, a dancer in the company’s corps de ballet, had some wonderful strengths, mostly pertaining to its supple and very active pas des deux. These interludes provided some dynamic close-ups of the company’s rising artists, particularly recent hire Norika Matsuyama, graceful yet assertive, her partner, Steven Morse, and the duo of Dores Andre and Hansuke Yamamoto. Jennifer Stahl and Sean Orza completed the fine sextet.

But it needs editing, specifically its endless peregrinations for the six members of the corps, hamstrung by what felt like hieratic posturing – arms and heads angled just so; two-dimensional poses; yet for all that precision, a certain discursive ambiguity. As a new dance maker, Thatcher is looking for a lot of things; you sense that eventually he’ll find them and be able to share them with his audience.

As a new dance maker, Thatcher is looking for a lot of things … eventually he’ll find them and be able to share them with his audience.Hans van Manen’s Variations for Two Couples, a virtuosic little gala piece, led the evening. It’s a sleek leotard ballet that feels very rich indeed, calling for precise postures and gestures (including idiosyncratic bobs of the head), athleticism, and miles and miles of heart. Frances Chung and Davit Karapetyan commanded the center of attention initially, but were superseded by Sarah van Patten and Carlos Quenedit, whose stealth romance soon bloomed in full, evoking, somehow, the movie “A Man and a Woman. Music by Benjamin Britten, Einojuhani Rautavaara, Steven Kovacs Tickmayer and Astor Piazzolla was sensitively interpreted by the San Francisco Ballet Orchestra, led throughout the evening by Martin West.

William Forsythe took a bow after his The Vertiginous Thrill of Exactitude, created in 1996 for Ballet Frankfurt and set to Schubert. Funny yet taxing, it received superb renditions all round from Chung, Sofiane Sylve, and Vanessa Zahorian, and the men, Carlo di Lanno and Gennadi Nedvigin, who were particularly amazing in the power, yet precision and ease, of their leaps and turns.

The Kingdom of the Shades (La Bayadere, Act II) got off to a slightly wobbly start as the white-clad corps de ballet made its hypnotic way down diagonal ramps, but soon reached a more secure footing. San Francisco Ballet’s production of the vision scene, with the warrior Solor’s opium dream staged by Natalia Makarova after Marius Petipa to Ludwig Minkus’ score, was first performed in 2000 and has, momentary bobbles aside, lost not a step. As the temple dancer Nikiya, Yuan Yuan Tan’s performance remains absolutely perfect, but the astonishment was Taras Domitro as Solor, projecting a new and almost eerie power. In his elevation, strength and aplomb in this supremely classical role, he has become a true danseur noble.