The Little Mermaid
By Rachel Howard ,

“This is for her,” another critic said to me Saturday during the rapturous standing ovation that greeted the U.S. premiere of John Neumeier’s The Little Mermaid at the San 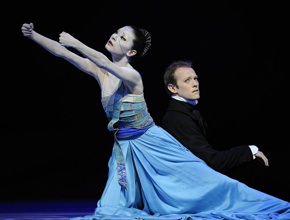 Francisco Ballet. My colleague was referring to Yuan Yuan Tan, the Chinese-born, exquisitely delicate ballerina, who for more than two hours had let herself be maimed, disfigured, pushed about in a wheelchair, rejected, and humiliated as the titular sea creature in Neumeier’s violent saga. And I believe my colleague was right, and not only because to see Tan surrender her elegance makes for great novelty. Rather, from her dejected stare to her wrenching, grotesquely twisted limbs, this was a performance of absolute commitment, and a career milestone.

But the crowd also gave a rousing cheer for Neumeier’s curtain call, and for good reason. The choreographer studied theater in his native Wisconsin but has conducted his artistic career in Germany for four decades (37 years as director of the Hamburg Ballet). His story ballet spectacles are popular in Europe though new to San Francisco, and The Little Mermaid makes an appealing introduction. 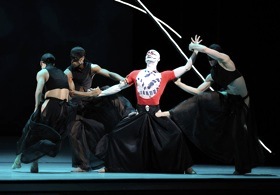 Commissioned by the Royal Danish Ballet in 2005 and revised in 2007, it’s a clever and earnest postmodern retelling. Neumeier begins with the character of Hans Christian Andersen onstage as “the poet” (danced by Hamburg guest artist Lloyd Riggins) watching his beloved Edvard marry; his tear of grief falls into the sea and becomes the mermaid, whom he continues to bring to life on the page (he shadows her through much of the ballet, furiously writing in his little black notebook).

The mermaid falls for a prince who looks strikingly like Edvard (played with boy-toy innocence by Tiit Helimets); redemption for both the mermaid and her creator comes through literary transcendence.

All this is brilliantly staged through Neumeier’s ingenious scenic, lighting, and costume designs, which give the mermaid long Japanese trousers that fan out when her handlers lift her, thus resembling fins. The beach setting she washes up on has surrealist touches (the painted backdrop evokes Magritte), while the underwater atmosphere is particularly entrancing, thanks to undulating lines of neon and a dozen other clever riggings. The camp appeal of Neumeier’s other costumes cannot be overlooked: With his face paint, the Sea Witch (a powerful Davit Karapetyan) could be Gene Simmons from KISS, and his helpers wear black chaps that would fit in at the Folsom Street Fair. 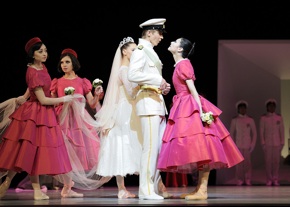 Lera Auerbach’s score richly conjures a dark, roiling ocean, with eerily ascending themes and whale-song theremin. The orchestra played beautifully under Music Director Martin West, and the ballet’s corps found the rhythms of the tricky syncopations. Yet Neumeier’s choreography isn’t much concerned with musicality or a distinctive style. He borrows whatever movement serves the larger stage picture, from the Alvin Ailey–like deep pliés and tilted extensions of the undersea creatures, to elements of Frederick Ashton’s Ondine in the mermaid’s pretransformation frolics, to hints of Mats Ek in the circusy bridesmaid dances.

I have no objection to choreography that is more about dance as storytelling than style (and I can’t help thinking how much influence Neumeier must have had on the creator of the now-famous “all-male” Swan Lake, Matthew Bourne). But I do wonder if, once the awe at the sets and costumes and the shock of Tan’s performance wear off, viewers will feel less forgiving toward the turgid storyline.

Be warned: Act 1 of this ballet is more than an hour long, and Act 2 nearly as endless; it feels long, because the emotional relationships among the characters really don’t change or develop. The prince is a chummy playboy oblivious to the mermaid’s torture (one nice touch here is the joking “got your nose!” gesture Neumeier has Edvard/the Prince make, first to the poet and later to the mermaid). Any story arc here is more of a flat line as we watch the mermaid suffer through one wedding dance after another. The Princess, too, simply carries on, tra-la-la. Sarah Van Patten, the company’s finest actress, gave an enthusiastic interpretation of that one-note character on Saturday; she will dance the mermaid in later performances, alternating with Tan. She will be a quite different mermaid, to be sure; and if she’s as committed as Tan, the standing ovations for a ballet that would have been more dramatically potent at half the length are likely to continue.