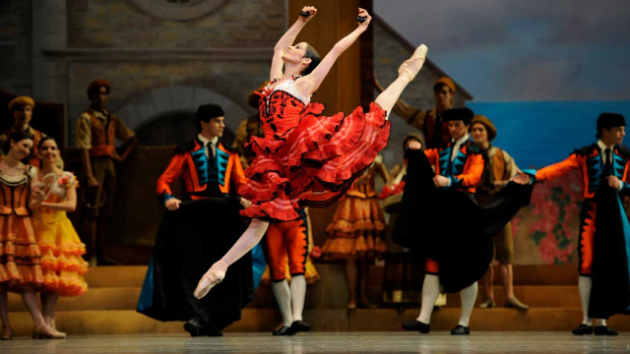 Mathilde Froustey, who came to the San Francisco Ballet from the Paris Opera Ballet, dazzled the audience Friday night as Don Quixote launched its 11-day run. There are many ballerinas in the company who can give a wonderful account of the rebellious charmer Kitri — as will be shown this week — but Froustey, whose countenance is as joyous as the Don’s is woeful, deploys her formidable technique with uncommon gentleness. Her feet are gorgeous, forming perfect parentheses when she moves through échappés, flourishing her fan or a pair of castanets. Her port de bras is so easy, you don’t really notice anything but how slender, how beautiful her arms are. Her blithe fouettés look like they could continue forever. Her grands jetés – well, you get the idea. It’s hard to imagine that when she left Paris she was just a soloist and not sure if or when she might move up.

Her Basilio, Cuban-born Carlos Quenedit, works at it more visibly but was a fine and supportive partner, romping in his solos through enormous and enormously difficult turns, one leg tucked under just so or beautifully extended in grand pirouette.

There were other delights of casting and performance, beginning with Jim Sohm’s slightly underplayed but extremely ingratiating Don Quixote and Pascal Molat’s delicious, ham-stealing Sancho Panza. The ballet puts them a little to the sidelines, but when they have business to do, it had better be right or the entire thing will crumble. They looked very right.

In featured roles, Daniel Deivison-Oliveira’s Espada was just terrific as a smoldering toreador with smooth spins and knifelike posture. As his inamorata, Mercedes, Sarah van Patten’s hauteur and the precision still allowed willow-like flexibility in a series of backbends – which must be especially difficult in her character’s high-heeled shoes.

As the foppish, elderly suitor Gamache, Ruben Martin Cintas is just splendid. It’s partly his mime and his timing, but it’s partly the costuming — more about that later. Suffice to say that when he waves arms around, his lacy, floppy sleeves make him look like nothing more than an eager little puppy. It gives his portrayal an innocence and warmth that helps drive the entire superficial plot.

It all spoke well for one of the most demanding ballets in the repertory — demanding for the dancers, but also for an audience growing ever more accustomed to a quick, we’re-outta-here ethic. Not so fast – we start at 8 p.m. and we’re done at 10:30, with two 20-minute intermissions, and Ludwig Minkus has some things he wants to tell us not once, not twice, but thrice. So, yes: It’s a long sit. But it helps that there’s a fine orchestra conducted by Martin West.

And this “Don Q” has so much to look at. Artistic director Helgi Tomasson first put it into the repertory in 2003, aided by resident choreographer Yuri Possokhov, who helped lace the Marius Petipa/Alexander Gorsky choreography with reminders of how he’d danced it as a student at the Bolshoi. Tomasson danced at the New York City Ballet, where George Balanchine’s 1965 version portrayed a poignant figure in the old Don, pining after a Dulcinea who closely resembled Balanchine’s muse, ballerina Suzanne Farrell. Tomasson invested some of that warm and witty melancholy in the Don.

But it took the costuming and stagecraft of the Tony Award-winning Martin Pakledinaz to really dress up the warhorse; the new production premiered in 2012.

Plenty of tributes have been paid to the designer, who died that same year, but this is one of the liveliest and most delightful memorials of all – warhorse as clotheshorse, if you will.

Dazzling and audacious in its mixes and mismatches, the tutus, ruffles, weskits and jackets combine orange and turquoise, purple and yellow. When a wedding fiesta breaks out, the guests wear black and white. Pakledinaz reveled in surprise. He knew how to make the eye travel and widen at the same time. The new décor (Pakledinaz did the sets, as well) replaced the previously rented Royal Danish Ballet sets and costumes. What a terrific investment.