Fragile Vessels is a miracle of contradictions. Evanescent yet memorable, it is, within its one-act timespan, remarkably capacious. If you’ve lived or loved, lusted or lost, there’s likely something here for you. 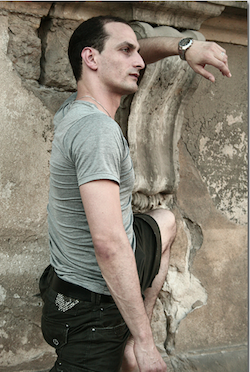 Fragile Vessels premiered Tuesday at the War Memorial Opera House, opening the San Francisco Ballet’s 2017–2018 season. By Czech choreographer Jiří Bubeníček, with scenic design by his twin brother, Otto, it hews gently yet emphatically to the romanticism inherent in its music, the Rachmaninoff second piano concerto, featuring pianist Mungunchimeg Buriad, with the ballet orchestra led, all evening, by Martin West.

In its three movements the ballet launches extravagantly into extensions and involutions, lifts and catches, that speak of burgeoning love, stunningly expressed in the plunging and soaring pas des deux of Sofiane Sylve and Carlo di Lanno, Dores André and Francisco Mungamba, and Koto Ishihara and Wei Wang, eloquently backed by an ensemble of 14.

Designer Uroš Belantič has dressed everyone in beige leotards, splashed with color at the principals’ shoulders, with matching unisex headbands. The simplicity is reinforced by Otto Bubeníček's angular, art deco-ish beige backdrop. Unobtrusive yet declarative, the décor adds focus to the dancing.

The second movement, for Dores André, Joseph Walsh, and Wei Wang, creates an intersex love triangle, complex in its supple intertwinings, its transitions between ease and intensity.

Movement three, for the first movement cast and ensemble, reaches resolution, but the gorgeous shapes, the combination of restless angularity and composed lucidity even at the end imply that passion’s contrasts and contradictions are eternal and conclusions are never writ in stone.

Leading off the evening, Artistic Director Helgi Tomasson’s 1991 Haffner Symphony, set to Mozart, has lost none of its beyond-the-candy box twinkling charm. It’s gained some impressive interpreters, particularly in Maria Kochetkova and Angelo Greco, the principal couple. Greco, who joined the company last year as a soloist, looks to have a big career. A dancer along the illustrious lines of Joan Boada, he’s technically acute yet plush (Those leaps! Those landings!). He’s also charming — perhaps he smiles a teeny bit too often, but it’s a great smile all the same. Kochetkova, with her usual perfection, seems thoroughly at ease and sweetly imperious. If anybody can achieve that, she’s the one.

As for the ballet, it’s one of Tomasson’s best. Its classical adornments, reinforced by the turquoise-blue designs of Santo Loquasto, and classical vocabulary by no means impede its exuberance or the energy of the performances. No standing around here – the ensemble is in constant and delightful motion.

In the Countenance of Kings, New York City Ballet dancer Justin Peck’s wonderful piece that had its world premiere here last April, remains astonishingly great. Set to Sufjan Stevens’ composition “The BQE,” it first appears to be modest and almost pedestrian (as in, just a bunch of us here, hanging out in the big city).

The title In the Countenance of Kings is a pun known to New Yorkers, Kings being the county through which the Brooklyn Queens Expressway, or BQE, rambles and rumbles. The title is a little clue that things aren’t so simple in Peck’s world. What a bad boy he is, dipping into the provenance of Jerome Robbins, a Brooklynite made good as a giant of a choreographer. (Besides his Broadway chops, he was co-artistic director of the New York City Ballet.)

The ballet’s opening has overtones of Robbins’ West Side Story, just us teens, clustered here in the schoolyard. Like Robbins, Peck soon explodes his cozy kids-in-playclothes clot into vivacious, tough and tender, juicy movers. The thrills don’t stop. Kings rules, and by the innovation and implicit youthfulness of the piece (Peck himself hasn’t yet hit 30), there are storybook and mythological names for the characters, their playful interpreters summiting artistic mastery.

Standouts Tuesday night included Joseph Walsh (the Protagonist), Daniel Deivison-Oliveira (the Foil) and Luke Ingham (the Hero), and Dores André (Quantus), Frances Chung (Electress) and Jennifer Stahl (Botanicus). As their cohorts, we have a dozen eloquent members of The School of Thought.

The names aside, there’s no real story. The dancers and how they relate to, ride on, and override the music are the meat of the piece. The movement is propulsive, stretchy, compact, explosive. On occasion, the dancers return to their roots; the women, after all, are on point. But when we look at what Peck has created, and in fact what each of the ballets represent, we see in how many directions classical ballet has gone. That continuity and excitement of exploration bodes well for the art form, and for the season to come.