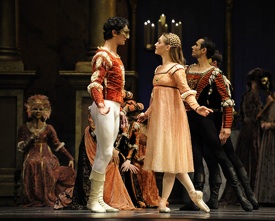 For general ballet-goers, the run of Romeo and Juliet that opened Saturday and continues through this week is the crowning jewel of San Francisco Ballet’s 2010 season, which takes over the War Memorial Opera House every January through May. For close followers of this internationally ascendant company, though, this R&J also serves to crown Sarah Van Patten as one of the troupe’s — indeed, one of the country’s —most powerful ballerina-artists.

Van Patten, now 26, came to San Francisco in 2002, after a precocious start to her career at the Royal Danish Ballet. In her early seasons here, she was bold and headstrong, yet so green and unknown that we hardly knew what to make of her; her performances were suspenseful, often commanding, and sometimes edgy and erratic. In 2007, the last time San Francisco Ballet danced this Romeo and Juliet, Van Patten was granted a single night’s performance in the lead. She was utterly naturalistic, impassioned, and convincing; finally, it seemed, we had been granted a clear glimpse of her full gifts. Over her last two seasons, especially, that glimpse has become a consistent, steady view. Van Patten’s dramatic authority as Juliet on Saturday was no revelation — but only because the diehard subscribers and standees have seen her dominate the entire repertory this season.

To see her as one of the great Juliets makes catching this 1994 staging by Artistic Director Helgi Tomasson tremendously rewarding, even though a new production would be welcome. (Van Patten will alternate with Vanessa Zahorian; a highly anticipated debut in the role by Maria Kochetkova was nixed, for unknown reasons.) Tomasson’s version is not as well known as Kenneth MacMillan’s, or as dramatically propulsive as this ballet’s gold standard, John Cranko’s (seen in the Bay Area when the Stuttgart Ballet toured here in 2003). Sets and costumes by the late Jens Jacob Worsaae do the job, but backdrops of splattered pastels look dated against the Renaissance tapestries, and a sea of swirling black and salmon overwhelms the eye just when you want to follow Romeo through the ballroom scene. Still, Tomasson treats the Prokofiev score, with its disturbing vacillations between sweet swoonings and blaring dissonances, with integrity, and the orchestra sounds great under Music Director Martin West, with especially nice contributions from the horns.

To Swoon, Perchance to Die

Any Romeo and Juliet stands or falls on two scenes — the balcony scene and the death scene in the crypt — and on Saturday both were absorbing, thanks to their interpreters. Pierre-François Vilanoba is a good Romeo, with a handsome, still-boyish face that projects innocent ardor to the furthest reaches of the opera house, and his dancing was in fine form. But Van Patten was so committed Friday that the ballet could well have been renamed Juliet and Romeo. 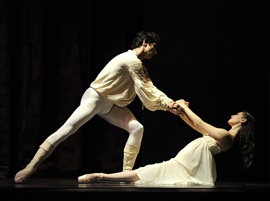 She built her character steadily and slowly, capitalizing on that open, saucer-eyed face reminiscent of one of the historical great Juliets, Galina Ulanova, and emphasizing teenage awkwardness. Van Patten has a now-familiar way of sticking out her head and neck like a sweet, shy turtle and gulping, but simmering beneath her inexperience as Juliet were sheer hormones. Van Patten’s balcony scene was all about the discovery of sexual chemistry — she flung herself at Vilanoba at well-timed intervals, and when at last he kissed her, and she panted, relishing it, the moment was so authentic that the audience giggled.

This Juliet’s fate was sealed as much by biology as by romance. The interpretation movingly underlined just how isolated Juliet is in her ordeal. In the bedroom scene, when she has been abandoned first by Romeo, then by her father, and then even by her mother, and finally by her steadfast nurse, Van Patten’s arms pushing violently through the air showed us a girl fighting a losing struggle with the universe. Later, Van Patten displayed the heroism of Juliet’s final suicide, bringing the entire ballet to a climax with a long pause as she held the knife skyward, took three huge breaths as though praying for strength, and at last spent every ounce of her willpower in that fatal stab.

A great supporting cast made the other scenes far more than filler. The virtuoso brothers Benjamin and Matthew Stewart enlivened the Act 2 crowd scenes, with bright and gamely Dores Andre as their hyper-flexible fellow acrobat. Courtney Elizabeth and Pauli Magierek slashed aggressively across the stage as the ever-present wenches. Pascal Molat brought spectacular technique and ribaldry to Mercutio, even adding a comic sneeze to his jousting with Tybalt, played masterfully by Damian Smith, who captured the full character in his posture, one leg always cocked, standing upright with a snitty nose in the air as he twirled his sword. Quinn Wharton was a particularly good choice to play Paris, the man whom Juliet’s parents would have her marry; he was inoffensively gallant rather than odiously overbearing, only a cog in the much larger wheels of this tragedy.

The full cast made those wheels of tragedy turn. But, thanks to the intensity of Sarah Van Patten’s performance, this was Juliet’s tragedy, and her solitude was a triumph.