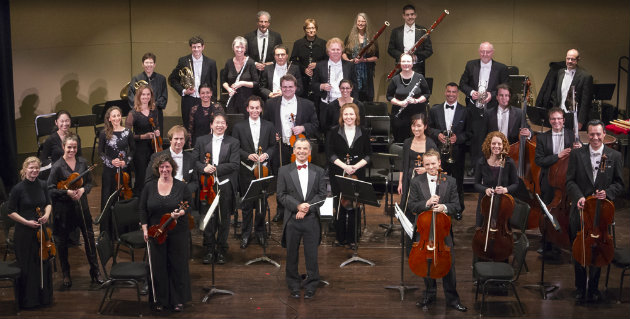 There’s something extremely refreshing about the San Francisco Chamber Orchestra. Though the ensemble’s concerts are free, it provides the highest-quality interpretations of new and little-known works.

Conductor Benjamin Simon educates his audiences without condescension — he creates a comfortable, utterly unpretentious atmosphere where classical music connoisseurs and neophytes alike will feel at home. It’s no wonder that the ensemble attracts a large fan base; Palo Alto’s First United Methodist Church was filled for the orchestra’s Saturday, Oct. 24, concert of unusual 20th- and 21st-century works.

The high point of the program was actually a short set without the orchestra consisting of three experimental works with odd instrumentation, led by percussionist Loren Mach. Belgian composer and choreographer Thierry de Mey’s 1987 Table Music calls for three “players” who create various rhythms using their hands and a tabletop. Mach, along with percussionists Stan Muncy and Haruka Fujii, emphasized the strong pop-music quality of the work — many of de Mey’s rhythms call to mind hip hop or drumline beats.

Mach pointed out that de Mey, as a choreographer, incorporateddance elements into the work. The various slaps, claps, and taps that the trio utilized in the piece were combined with dance-like gestures to create a kind of hand ballet. Even the staggered page-turns that set off the work’s short canon were executed in a slow, exaggerated manner, contributing to Table Music’s choreography. The performance was delicate and mesmerizing — the same basic melodic pattern is repeated with slight alterations and additions as the piece progresses, creating a kind of starry soundscape.

David Lang’s 2002 the so-called laws of nature was originally composed for Brooklyn’s So Percussion ensemble. Percussionist Megan Shieh paired up with Mach for the third movement of Lang’s piece, which requires an arsenal of teacups and flowerpots, among other, more traditional percussion instruments. Mach related that it took several hours of flicking flowerpots in Home Depot to find perfectly pitched pots. The performance was delicate and mesmerizing — the same basic melodic pattern is repeated with slight alterations and additions as the piece progresses, creating a kind of starry soundscape.

The third movement of Serbian composer Nebojša Jovan Živković’s 1995 Trio per uno, which followed could not have been further removed from the tinkling serenity of Lang’s work. Mach, along with percussionists Jim Kassis and Ben Paysen, beat out fierce, rapid-fire tattoos on a circular assemblage of bongos and Chinese opera gongs surrounding a single bass drum that the three players shared. The trio played with assembly line precision, executing the kind of triune “oneness” implied by the work’s title.

Harpist Meredith Clark opened the program with a stylish performance of Debussy’s 1905 Danses sacrée et profane, a miniature concerto conceived for French piano manufacturing firm Pleyel and Company’s short-lived chromatic harp. While the better-known pedal harp requires the player to depress a series of seven foot-pedals in order to sharpen or flatten the strings’ pitches, the chromatic harp had a series of crisscrossing strings — one for each pitch of the chromatic scale. Debussy’s work was meant to showcase Pleyel’s new invention, but luckily the work is playable on the more popular pedal harp.

For the second half of the evening’s program, concertmaster Robin Sharp joined Simon and the orchestra as the soloist for Leonard Bernstein’s 1954 Serenade (after Plato’s Symposium) for violin, strings, harp, and percussion. In imitation of Bernstein’s Young People’s Concerts, Simon walked the audience through the piece, having Sharp and the ensemble play various excerpts. He clearly hoped it would aid the audience members in active listening.

Unfortunately, there wasn’t much to listen for. Simon’s enthusiasm couldn’t hide the fact that Serenade is a somewhat flavorless work. Sharp herself seemed uninspired — try as she might, there was little she could draw from the solo part. While Bernstein composed some of the most beautiful melodies ever written for his stage works, his symphonic themes by comparison are often bland and constrained in an attempt to create “classic” music.

It’s no surprise that the work’s jazzy fifth movement is most successful, in which the soloist plays a tipsily dissonant waltz. This seemed to be one of the few moments Sharp enjoyed, as she drunkenly drooped her head along with the music. And while the whole work didn’t provide enough charm, Simon’s  excellent introduction to the work proved an ideal model of how a musician can engage with audiences.