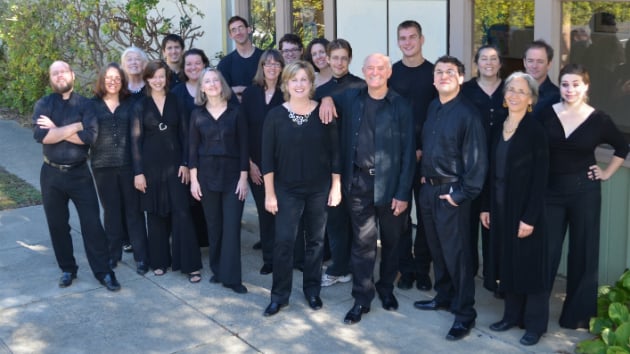 All-choral concerts can be a tough sell. But certainly not when you have Mads Tolling in the mix. That’s why the San Francisco Choral Artists is making it a point to seek out and commission music for choir and one other instrument in an initiative dubbed SFCA+1. For this weekend’s performances, former Turtle Island String Quartet violinist Tolling joined the choir in five of the 18 selections, with improvised and written-out instrumental accompaniment. The rest of the concert was a capella in the beautifully resonant St. Mark’s Lutheran Church in San Francisco.

The choir celebrated the end of its 30th season with a far-ranging program that stretched from the 1400s up to the present day. Selections included Renaissance madrigals by Orlando Gibbons and Mateo Flecha, Fanny and Felix Mendelssohn’s chromatic chorales, dancy Latin numbers, rockin’ 20th-century American songs, and abstract modern compositions.

Tolling plays with tight rhythm and choppy bow strokes characteristic of jazz violinists. He added a lot to the concert, whether arpeggiating the harmonies of madrigals with added sevenths and ninths, energizing a groove with percussive bow crunches, or acting as full-on protagonist in Herbert Bielawa’s “You Drive Me Crazy.”  In this last piece he ran a restless, dissonant commentary conveying mounting frustration and ending in an unapologetically scratchy crash.

Originally from Denmark, his decoration of the Danish folk song “I Skovens Dybe Stille Ro” (“In the Peaceful Forest”) was, by contrast, sweet and mellifluous. His improvisatory, concerto-like weaving up and down the range of the violin over the choir’s smooth “oohs and ahhs” felt like a jazz showpiece next to the grim and introspective texts.

A complex set of ideas organized the varied program. The concert was entitled “Old Masters, Young Prodigies,” referring to some of the composers on the program such as Schubert and Mendelssohn who died relatively young. Sub-sections within the concert focused on various deep subjects such as “Dreams of another time and place” or “Facing Death.” Gideon Klein, a Czech composer who died at the age of 26 in a Nazi concentration camp, wrote his hopeless “Madrigal” in Terezin ending with the words “I am nothing anymore, I no longer live gladly.” Hugo Wolf’s “Ergebung” was similarly dire, with the words “in deepest grief I bend my face to the dust.”

The next section was entitled “Faith and hope in what lies ahead.”  Mateo Flecha’s “Riu Riu Chiu” was bouncy and uplifting. Moses Hogan’s “Elijah Rock” stuck out in the concert for its crisp rhythmic textures and wild glissandi, carried out with enthusiasm by the choir.

After intermission, in a sub-section labeled as “Innocence and peace of childhood,” the choir had fun with Brazilian children's songs in a world premiere arrangement called Cinco Cantigas de Roda by Daniel Rufino Afonso. It was delivered with all the energy of a rowdy playground.

The last section cycled back to “Lost Innocence” with Gershwin’s “Just Another Rhumba” in another world premiere choral arrangement by SFCA member Tina Harrington, who traded places with the conductor for this number. Another member of the choir, Joseph Taff, was the winner of SFCA’s New Voices Project. His “That Time of Year” is a setting of Shakespeare's sonnets and a snippet of King Lear. Shakespeare’s verbosity gets lost in complex music, but the beaming energy of a youth meditating on death, was fervently conveyed by the choir.