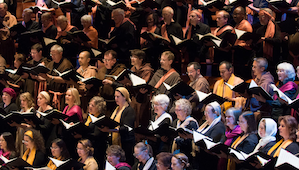 When reviewing a performance, critics often gloss over the setting of the event in the first sentence. For many reviewers, the concert halls of San Francisco have become familiar, and perhaps even quotidian. Having lived in this city for only a year, I am continually inspired and excited by the exquisite spaces in which I often find myself for concerts. From the Hotel Rex to the St. Gregory of Nyssa Episcopal Church, San Francisco musical organizations continue to highlight places I might never have ventured to, were it not for classical music. Saturday night’s performance of Franz Joseph Haydn’s Die Jahreszeiten (The Seasons) by the San Francisco Choral Society was hosted by one of these special San Francisco venues — the magnificent, acoustically glorious Calvary Presbyterian Church in Pacific Heights, which heightened the performance and left me feeling musically satisfied.

Brancoveanu’s rich, sonorous, and profound baritone voice was both the literal and metaphorical anchor for this performance.

Under the direction of Robert Geary, the three soloists (Marcelle Dronkers, soprano; Brian Thorsett, tenor; Eugene Brancoveanu, baritone), the California Chamber Symphony, and a choir of 150 moved dauntlessly through this massive oratorio. At over two hours, Die Jahreszeiten is a beast. Throughout the performance, the choir responded well to Geary and shone particularly in the homophonic sections “The Storm” and “Drinking Song.” During the latter, the choir became distinctly more animated and beamed as they boisterously sang of dancing, music making, and drunken autumn evenings. Although the choir did struggle with a few melismas, and the tenors and sopranos occasionally sounded a bit strangled in their upper registers, for the vast majority of the piece the choir held its own.

The true stars of the evening, however, were the tenor and baritone, Thorsett and Brancoveanu. Both are alumni of the Merola Program, and their voices were absolutely sublime. Thorsett’s clear voice leapt into the upper register with ease, while his sense of the musical line during his recitatives, arias, and cavatinas was impeccable. Brancoveanu’s rich, sonorous, and profound baritone voice was both the literal and metaphorical anchor for this performance. During intermission, I found a seat in the balcony directly above the soloists and I was astonished by the sheer immensity of his voice. It virtually pinned me to my seat and almost seemed too big and too heavenly to be real.

Geary continues to push his all-volunteer choir to present some of the grandest masterworks of choral literature.

Although there were moments in which soprano Marcelle Dronkers matched the men for lyrical quality and technical skill — especially in her ability to float lovely, stratospheric notes — she paled in comparison to these two singers at the height of their vocal prowess. Her light Mozartean voice was no match for the larger, more magisterial voices of her male counterparts. Despite the vocal mismatch, Dronkers carried the performance dramatically, and her spirited acting during her aria about a young maid who outwits a lusty nobleman brought much-needed life to the “Winter” section.

With this performance of Die Jahreszeiten, Robert Geary continues to push his all-volunteer choir to present some of the grandest masterworks of choral literature. It is by no means easy to produce works of this magnitude, and praise should be given to the singers and orchestra members for agreeing to take on such a challenge. I left the concert having been musically moved, naturally, but I was surprised to find myself feeling so grateful for the opportunity to hear these types of works, live. I am extremely glad that Geary makes these works his mission, and I will make it my own to continue attending his concerts.