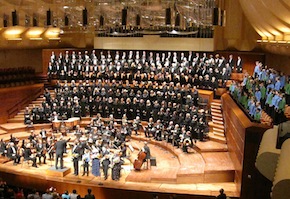 The San Francisco Choral Society offered Bay Area audiences a rare treat Saturday at Calvary Presbyterian Church in San Francisco: the West Coast premiere of Seven Songs for Planet Earth, by Finnish composer Olli Kortekangas. This work sets poems by Wendell Berry alongside a prayer by St. Francis of Assisi, a Sámi yoik (a tradition of the indigenous people of northern Scandinavia), and texts written by the children who sang in the work’s premiere. The texts all relate to various aspects of humankind’s relationship with nature and the Earth, and Kortekangas’ setting reflects the varied emotions found in the texts.

Under the direction of Robert Geary, the Choral Society was joined by the Piedmont East Bay Children’s Choir and soloists Shauna Fallihee, soprano, and Nikolas Nackley, baritone, as well as by the California Chamber Symphony. Geary’s direction throughout the work was assured, clear, and passionate — no surprise, given his reputation and acclaim for championing newly written music. The musicians responded to Geary’s command of this challenging work with an equally tangible enthusiasm, if at times with some timidity on the part of the adult chorus.

Kortekangas’ score is richly varied, demanding rhythmic precision, a range of dynamics, and a facility with both homophonic and polyphonic textures. The cycle as a whole is built around contrasts, with each movement offering a different texture to that which preceded it, yet all connected by a sense of repetition of the elements the composer considers most important at any given moment. Although the chorus did well with Kortekangas’ rhythms and dynamics, his rich harmonic inflections were sung tentatively when set polyphonically.

The movements that featured predominantly homophonic writing or a cappella sections put the chorus more at ease, allowing the singers to deliver a more full-bodied and confident sound. This was evident in the second song, “The Canticle of the Creatures,” in which each of the chorus’ refrains sounded like a welcome, joyful return. The Choral Society also shone in the a cappella third song, “Sowing the Seed,” whose many repeated motifs allowed the chorus to display an excellent blend. The imbalance between the sections, though, was all too evident toward the end of the movement when the basses held a low, nearly inaudible drone under the rest of the chorus.

The two soloists fully embraced the emotional aspects of their movements.

The two soloists fully embraced the emotional aspects of their movements, each taking command of the stage and balancing well with the chorus. Nackley’s clarity and fervor were particularly engaging in “The Canticle of the Creatures,” while Fallihee’s agility and incisive emergence out of the orchestral texture were both riveting in the fourth song, “Yoik,” which featured her singing a set of simple syllables to an increasingly complex pattern of pitches. Both soloists were, however, somewhat overpowered when the children’s chorus was singing above them, as occurred in two separate movements.

The Piedmont East Bay Children’s Choir was featured in the sixth song, “The Beat,” in which the children’s strong, clear voices sustaining long lines created a serene foil to the adult choir’s percussive repetition of the Finnish words maaemo, emo maa (Mother Earth, Earth mother). Four of the children also sang a lovely duet in the seventh song, “The Peace of Wild Things.” The orchestra gave excellent support throughout, with a particularly fine marimba solo in “Yoik,” and gentle flute solos in “The Beat.” The audience seemed to genuinely enjoy these Seven Songs, giving Kortekangas — who was in attendance — a warm reception.

The second half of the concert presented Mozart’s Mass in C Minor, a piece that, like Seven Songs, employs lots of contrasts and demands a fair amount of agility from each musical section. Unfortunately, in following Kortekangas’ inventive 21st-century harmonies and rhythms, Mozart’s own inventiveness seemed instead commonplace. Geary conducted the entire Mass with the same attention to shape and precision as he had given to Seven Songs, but with less success. The performance suffered primarily from an overly heavy style in the orchestra, particularly in the strings, and from a real imbalance between the orchestra and both the choir and the soloists. This was especially problematic in fugal and rhythmically dense choral passages, in which the clarity of Mozart’s part writing simply disappeared, and in an overall tendency for the choir’s consonants to disappear, as well. Of the four soloists — Fallihee and Nackley, joined by soprano Jennifer Paulino and tenor David Kurtenbach — only Paulino was consistently audible above the orchestra.

As with the Kortekangas work, the chorus was at its best with Mozart’s homophonic passages, such as the “Christe eleison,” and the openings of the “Credo” and “Sanctus,” as well as in the “Jesu Christe,” in which the men’s sound joyously emerged from the texture. All four soloists sang difficult roles with style and ease; the soprano duet “Domine Deus” was particularly noteworthy for the way in which the two sopranos matched each other in the alternating high notes at the end of the movement. Both Fallihee in “Laudamus te” and Paulino in “Et incarnatus” displayed technical dexterity in these showcase arias, but it was Paulino’s vocal shaping, strength, and emotion in the “Christe eleison” that was a true highlight of the Mass. The orchestra’s most exquisite moment came in the “Et incarnatus,” with elegant solos by flute, oboe, and bassoon, and a more gentle touch in the strings.

Kaneez Munjee is a singer, writer, and editor. She holds a Ph.D. in musicology from Stanford University, and specializes in late 17th- and early 18th-century French music.