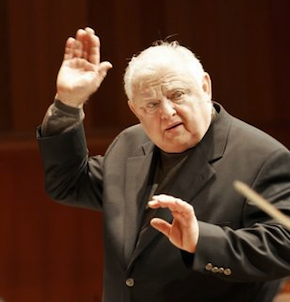 A composer’s passing is normally considered with thoughts of the voice and spirit living on, long past the lives of friends and family. That idea was pervasive at the memorial concert for the late Conrad Susa, presented by the San Francisco Conservatory of Music at St. Mark’s Lutheran Church Saturday evening. Mr. Susa had been a professor of composition at the Conservatory for 25 years before he died last November 21 at the age of 78.

The affection in which he was held was reflected in the care and even elegance of the performance of his choral works by students in the opera program and the combined Chamber Choir (Ragnar Bohlin, director) and Chorus, (David Conte, director). Although known by the public first by two of his five operas, Transformations (1973) and Dangerous Liaisons (1994), and although he wrote considerable music for San Diego’s Old Globe Theater and for Broadway, his considerable choral work may well receive the most attention.

The reasons, apparent at this concert, are the clarity of choral writing that keeps the words uppermost and forward with open textures even as the lines intersect. Often the pieces begin in a fine unison by the male voices and then flower as countermelodies weave in and out. And harmonically, the music is sure-footed, painted by passing dissonances like points of light or touches of spice he was said to use expertly at his culinary adventures. And lyrical it is, with consistently engaging and sure melodic lines.

The Choir/Chorus began with “Two Murder Ballads” (1969) (Susa favored the touch of the knife, double-edged or mordant or stinging nature, and even dark and ironically morbid as were his settings of Anne Sexton’s twists of the Grimm’s Fairy Tales in Transformations. The first ballad, on the folk song “Red Rosy Bush” was innocent and charmed, while “Pretty Polly” picked up the black edge of the text with deceptive melodiousness. Eric Choate, a student conductor, led with a nice, light hand; Colin Whitfield accompanied. The singing throughout the evening reflected fineness of blend of each section, excellence of intonation and expressive shading.

Harmonically, the music is sure-footed, painted by passing dissonances like points of light or touches of spice he was said to use expertly at his culinary adventures. And lyrical it is, with consistently engaging and sure melodic lines.

The principal offering “Six Joyce Songs” (1984) were lovely settings, each song developing in form that was expressive, leading to a pointed ending that musically, made the poetic point. A light bite concluded the first one, ending on the line, “The twilight turns to darker blue with lights of amethyst.” “At That Hour” came to an unexpected bright climax realizing the feeling of “heaven is aglow at that hour when soft lights come and go.” “Winds of May,” ending on the unanticipated “Love is unhappy when love is away,” was bright, with lively syncopations in the criss-crossing lines. The closer, “From Dewy Dreams,” ended on a Susa upstroke, and epigrammatic musical touch in the manner of Lieder.

Bohlin conducted with gentle expressiveness, respecting the continuity or unity of the cycle. A faculty pianist, Keisuke Nakagoshi, played with crisp lightness, particularly delicate and colorful in “Who Goes Amid the Green Wood.”

The program opened with eight singers from the Opera Program conducted by Tyler Catlin in “Consider the Wonderful Musicians,” a scene from Transformations featuring three as the “Andrews Sisters” (in that style), the Musician, the Hunter and three as forest animals. That opera, heard in an improbably good barn theater performance in Carmel Valley in the 70s, sold me on Susa’s gift. This was confirmed by a Spring Opera Theater performance in the Palace of Fine Arts Theater in 1980.

The closer was a beautiful setting of “Shenandoah” led by David Conte, combining all the qualities described above, and touching.

“You have to have transformative experiences”…. “Nothing is truly lost once it is known.” — Conrad Susa

Armer gave choice Susa quotations: On being a composer, “You have to have transformative experiences….”, “I want my music to be used not admired. I wanted to provide people with music they would like to sing. I did not crave fame” and “Nothing is truly lost once it is known.”

That last is telling for his voice and spirit will live on only as long as his music is played. Given the conventional programming in these parts, which has long ignored the music of Milhaud, Sessions, Imbrie, Peterson, Bloch, and many other distinguished composers, we can’t be sure. It’s up to us.