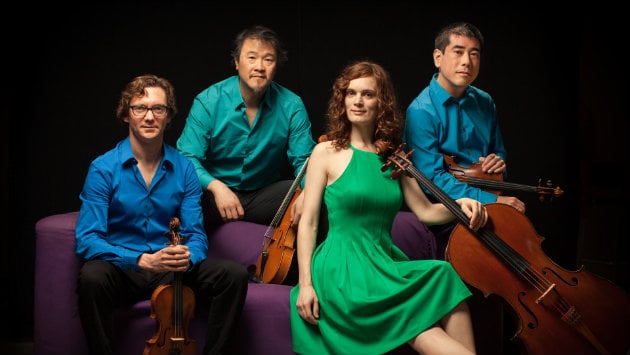 A pall hung over the Del Sol Quartet’s Dec. 5 performance at the San Francisco Conservatory of Music. Presented as a capstone to Terry Riley’s 80th birth-year, featuring the premiere of a new commission for string quartet and electric guitar, the celebratory tone was muted by the passing of Ann Riley, wife of the composer and mother of guitarist Gyan, on Nov. 27. Del Sol’s violist Charlton Lee dedicated the evening to Mrs. Riley’s memory in a short statement from the stage, imbuing the program — which included an additional quartet by Riley, as well as works by Huang Ruo and Stefano Scodanibbio — with a more introspective focus.

The concert opened with Ruo’s Calligraffiti, a work attempting to capture the (autobiographical) common ground between Chinese calligraphy and urban “tags.” Pairing ultramodernist features such as microtonally-drifting drones with melodic turns evocative of Chinese traditional music, the work followed an engaging trajectory, which culminated in a delicate interweaving of the same folk-like melody between the four instrumentalists.

Riley’s own The Wheel and Mythic Birds Waltz (1983), one of the composer’s many quartets written for Kronos, invited the audience into a less-abstract soundworld, shifting from the noir atmospheres of the opening ballad towards a whirlwind of Indo-Iberian activity for the titular (and conspicuously non-ternary) waltz. Credit as one of the “founding fathers” of minimalism notwithstanding, Riley’s later music is often anything but, its procedures embedded far beyond the audience’s reach, its lyricism at times unabashed.

Credit as one of the “founding fathers” of minimalism notwithstanding, Riley’s later music is often anything but, its procedures embedded far beyond the audience’s reach, its lyricism at times unabashed. There are, of course, telltale signs of its origins — the musical strands often seemed to “catch” in the grooves, so to speak, creating short, hypnotic loops before continuing on to their Dervish spinning. Whatever label we might choose, it is music that ultimately works, and as the ballad returned (only half-unexpectedly) to round up the form, a palpable sense of enjoyment lingered in the concert hall.

Scodanibbio’s reworking of Monteverdi madrigals in Mas Lugares offered a direct connection to Riley. The two were longtime friends and collaborated on two recordings in the 1980s — a fact emphasized by a note in the program from the Colfax native praising the late, Italian bassist’s artistry.

Mas Lugares effectively transformed the string quartet into a kind of hyper-viol consort, distorting the natural timbres of the instruments to create the illusion of a truly timeless music. Three of the five movements disclosed which specific madrigal they were based on, while the first and third movement took a more abstract approach. The music was simply sublime, arresting, and performed with careful dedication by the quartet.

The evening came to a close with its most anticipated number, the premiere of Riley’s Dark Queen Mantra. The long-range pairing with The Wheel and Mythic Birds Waltz proved effective, as the works occupy some of the same sonic space, especially in their evocations of Iberia. Since the mid-90s, when Gyan delved in earnest into his guitar studies, Terry Riley has produced an impressive number of scores for guitars of all types, creating a sprawling and ongoing collection dubbed The Book Of Abbeyozzud (with the intention of including one piece for each letter in the Spanish alphabet). I am not sure whether Dark Queen Mantra is officially part of this project, but it definitely fits its overarching aesthetic—one of hazy, brooding, and intoxicating atmospheres.

Structured more or less as a concertante piece for electric guitar, the work’s three movements explored a progressively darker path, from the rapid-fire figurations of the opening, to clearer melodic structures in the evocatively titled “Goya with Wings,” and finally into the nearly-obsessive rhythmic transformations of the eponymous third movement. A recording of this work is forthcoming, according to Del Sol; I for one will be looking forward to it.