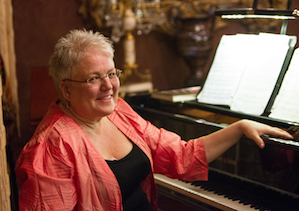 The fitting tribute one musician can pay another is, without exception, musical. So it was Sunday when one singer after another got up on the San Francisco Conservatory stage under a photographic portrait of the late Kristin Pankonin and musically honored her memory. Several, on completion of the song, turned towards the portrait with a gesture that was either dedicatory or recognition of her role in the singer’s life, or both.

Pankonin had made a large contribution to the careers of numerous musicians, mostly singers, as an insightful coach and highly sensitive keyboard partner. Also, for many, she was a knowing counselor and friend, and she was described colorfully, emotionally, and appreciatively in words spoken by Joseph Meyers and Mark Hernandez.

All the rest of the evening’s piano support was in the light, responsive, and sensitive hands of Timothy Bach and Robert Schwartz, his performance both delicate and elegant.

Modern times was first represented by “No One is Alone” from Steven Sondheim’s Into the Woods, given a rendition by Lisa Delan, soprano, most personally connective, as was her close professional relationship to Pankonin. Then there was Frederica von Stade in a cowboy hat with Bruce Rameker, in a fedora, reverting to his baritone range, having great fun with “Anything you can do, I can do better” (Irving Berlin’s Annie Get Your Gun and on into parody verses. Joseph Meyers, in comedian mode and bright tenor, led his parodic take on “The Legend of Kleinsach” (Offenbach’s The Tales of Hoffmann, Kleinsach supplanted by Pankonin’s denticulatory dog, backed by a half dozen of the evening’s singers.

Finally, Meyers and Krista Wigle led off Bernstein’s “Make Our Garden Grow” (from Candide) while singers gradually filed onto the stage from the audience, to a number of about 45, joining in the ringing close.

Then, the sizeable houseful that had been emotionally audible, in its enthusiasm, sympathy and humor, repaired to the lower lobby for an indecently generous and varied cookie reception. There, after extended visiting and reminiscing, ended what could be called — no disrespect to the Memorial intended — the Pankonin Bash.