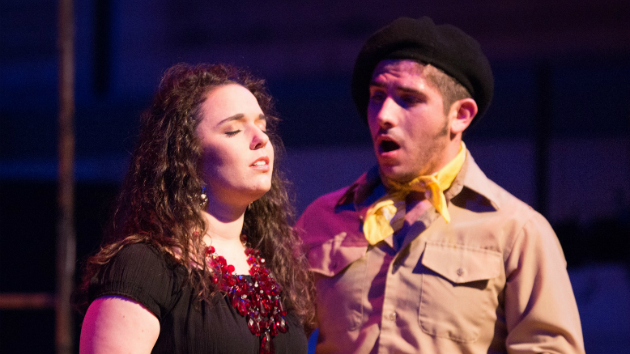 Clocking in at a taut 85 minutes, La tragédie de Carmen is a marvel of economy and intensified emotion. Brilliantly adapted from the 1875 Bizet opera by director Peter Brook and musical arranger Marius Constant, with additional credit to Jean-Claude Carriere, this 1981 work isn’t so much a cut-down version of the opera as it is a cunning reshaping and re-imagining of its source material. By restoring elements of the Prosper Mérimée novel that Bizet and his librettists tapped (and arguably softened), Brook and his collaborators fused the harsher elements of the original story and the propulsive bloodstream of the composer’s score to create a pulse-quickening piece of music theater.

The Brook Carmen was both a boldly anti-purist and wholly appropriate stroke of programming by the San Francisco Conservatory of Music, which mounted two performances Dec. 4 and 6 at the school’s Hume Concert Hall. With only four major singing roles, no chorus, and a small-scale orchestra, the piece showcased two largely different casts of young singers and an orchestra of sinewy, raw-boned authority.

The sum effect was what Brook and Constant intended – a viscerally concentrated Carmen rather than some school-book chamber reading of it. The S.F. Conservatory production had its shortcomings and over-reaches, but the vital spirit and soul came across.

The women and the woodwinds carried the night at the opening performance. Mezzo soprano Marissa Simmons, an eerily fateful grin of self-absorption fixed on her face, brought a sultry demeanor and rawly sensual, wry, whiskey-toned voice to the title role. As the heroine’s big numbers came one after another in the re-worked libretto, Simmons moved from seductiveness to sexual taunting, girlish playfulness to an adulteress’ insouciance with a sense of dramatic inevitability.

She toyed with Bizet’s dotted rhythms as if they were another erotic plaything, caressed every curve of the “Habanera” and “Flower Song” and delivered her spoken dialogue (in French with English surtitles) with theatrical aplomb. One of the night’s most cauterizing moments came without a note being sung, when her husband, Garcia (Robert St. John in a non-singing role), found Carmen sleeping with her lover Don José (Mario Rojas). Yes, she promptly admitted, this was her husband. Simmons managed to make her disloyalty to both men sound like a point of honor rather than dishonor. This is a singer – and actress – to watch. 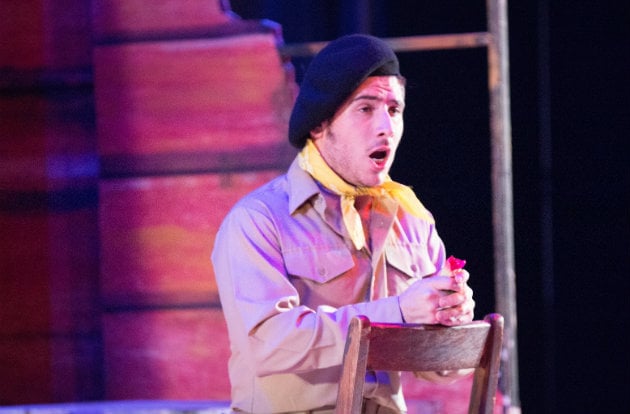 Equally fine, in a different and smaller emotional register, was soprano Ellen Leslie’s Micaëla, the innocent hometown girl who brings greetings from his mother to the reeling Don José. Her sweet, strong tone and earnest, pained demeanor were affecting. The wrenching duet with Simmons was a vocal high point, a fluid and finely focused interplay of two excellent voices.

As for those woodwinds in conductor Curt Pajer’s 14-member orchestra, they led the way in conveying the urgent expressiveness and astringent colors of Constant’s arrangement (and occasional re-ordering) of Bizet’s score. The bassoon, flute, and English horn all took on the prominence of solo singing voices. So did the brasses and percussionist Erika Johnson, who provided the haunting “Habanera” pulse beat on the timpani as well as some ominous chittering of castanets.

With so many assets in play, it’s an unhappy duty to report that Rojas’ Don José was the show’s most noticeable weak link. While his tenor voice had a handsome vigor in the high end, it tended to blur and lose dimension between registers. Especially in a version that makes the lead a more lethal and murderous character than he is in the full opera, Rojas was at a loss dramatically. He meandered the stage uneasily, looked more puzzled than purposeful when he pulled his knife, and generated only studied displays of passion. Director Heather Matthews did him no favors in the awkward way she staged his killing of Carmen at the end.

The Conservatory gave this Carmen the full-dress treatment, from the pit to the double casting to a large rotating set by Peter Crompton. The physical production was more elaborate than it needed to be. The time and labor required to turn and open out the set slowed the work’s rush of action.

When the Brook Carmen played Lincoln Center in 1983, the stage at the Vivian Beaumont was largely bare. That stripped-down aesthetic placed the focus where it belonged – on the essential love tragedy the piece distills. Simmons, for one, could have made such an empty space her own.