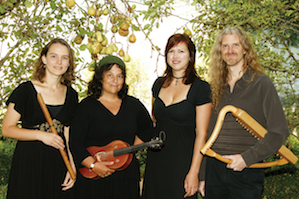 The ensemble Cançonièr took what it called an “excursion into medieval mass hysteria” as part of the San Francisco Early Music Society series Sunday at St. Mark’s Lutheran Church in San Francisco. The intelligent and well-planned program, replete with compelling descriptions of late-medieval “dancing mania,” showcased the ensemble’s multi-instrumentalists and its admirable creativity.

While modern scholarship provides only indirect hints and clues about how late-medieval dancing music actually sounded, those glimpses are as evocative and perplexing as the strange social phenomenon of the “dancing plagues.”

Given the crudeness of early musical notation, Cançonièr took liberties to arrange the surviving melodies into more dancelike forms. In this, the ensemble was highly successful, and the evening’s weave of short works took on a more panoramic effect. Much of the arrangement process involved adding drones and percussion to the modal melodies, resembling a basic format of world music ranging from Indian classical to raving electronica. Certain musical structures just seem lend themselves to wild dancing.

The ensemble linked the hysteria of the dances to their performance of Flagellant songs. Cançonièr relished some of the weirder and harsh dissonances that emerged at cadences of the songs (arranged using standard early-medieval techniques). A few arrangements of Notre Dame school polyphony went a bit far astray of what I feel this music would have been like in a typical performance of the time, with some works resembling Appalachian fiddling more than academic products of the University of Paris. Still, I like Appalachian fiddling.Certain musical structures just seem lend themselves to wild dancing.

Most gratifying in Cançonièr’s performance was the ensemble’s willingness to break the glass barrier between instrumentalists and singers. Every member sang, and every member played. The instrumentalists seemed to dive right into the singing, often doing so while playing, and doing so in pitch-perfect tuning. The unaccompanied, sung trio Ut queant laxis (anonymous, ca. 1500) was a performance worthy of most professional choirs, while Veni Sancte Spiritus (ca. 1300) proved a vehicle for Shira Kammen’s fine alto, though she is normally a string player. Cançonièr’s singer-specialist Phoebe Jevtovic provided more vocal virtuosity in the fleet-footed tarantella Pizicca Taranta (arranged by Annette Bauer).

Most gratifying … was the ensemble’s willingness to break the glass barrier between instrumentalists and singers.

One of Cançonièr’s strengths is the versatility of its five players (Tim Rayborn, Priscilla Smith, Kammen, Jevtovic, and Bauer). The constantly shifting timbres between the psaltery (a medieval zither) and vielle (a medieval fiddle) of In Seculum Viellantoris (“In Seculum” for the vielle player, ca. 1260) offered an unexpected pleasure, as did the attachment of bells to the vielle’s bow in a short Tedesco (German dance), and the medieval harp in a rendition of La spagna (Spanish dance). At one point, recorder player Smith held up a recorder with two barrels, saying, “I don’t actually know what this is, but they mailed it to me.”

Everything came together in the concert’s highlight, an amusing rendition of the Trouvère melody Des Merveilles. Emerging from the courtly singer tradition, the graceful melody laments the populace when they dance as the bagpipes play. Jevtovic sang the melody beautifully — harmonized, of course, by Smith’s crude bagpipes. If anyone in the audience wanted to dance, they had been forewarned.