There’s always lots of chatter at the San Francisco Friends of Chamber Music’s (SFFCM) Music Day. It was happening this past weekend at the San Francisco Conservatory — between acts in the three performance areas, on the stairs, in the hallways, and particularly on the downstairs café level. Aside from bubbling enthusiasm about the three-dozen-plus ensembles appearing Saturday evening and Sunday afternoon, much of the buzz had to do with changes over seven years of Music Days, and what’s in store for the Friends.

The changes were telegraphed in the first set of half-hour concerts on Saturday in the comfortable and spacious Caroline H. Hume Concert Hall, on the Conservatory’s upper level. The BELLA Piano Trio’s stately rendering of Beethoven compositions in traditional chamber music arrangement was followed by a breezy but artful jazz trio led by bassist Frank Tusa, recently returned to active engagement on the Bay Area jazz scene after a couple of quieter decades.

Tusa, with ensemble mates Keith Saunders on piano and Vince Lateano on drums, seemed to confirm that when the Friends changed the designation of their annual festival by dropping “Chamber” from “Chamber Music Day,” they weren’t losing anything but some unnecessary connotations. In fact, the Tusa Trio sustained the tasteful intimacy of BELLA Trio, adding in the conventions of improvisation and individual solos. This writer was at first the only person in the auditorium to applaud a solo, in accordance with jazz convention, but the rest of the audience quickly caught on. It was clear that they appreciated the casualness of the trio and Tusa’s tasty original compositions, as much as they did the free admission to the weekend’s events.

The Telegraph Quartet returned to the 19th century for a lovely and lyrical reading of Mendelssohn. The applause was deserved, as was the case with the Del Sol String Quartet, which played repertory from the 20th and 21st Centuries, cellist Kathryn Bates fraying her bow with the agitated and aggressive playing of the ensemble. 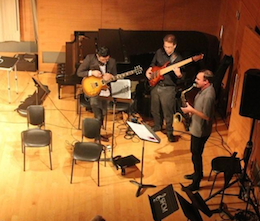 The late Australian composer Peter Sculthorpe’s Quartet No. 14 “Quamby,” prompted the Del Sol to engage local didjeridu virtuoso Stephen Kent, whose pair of long wooden aerophones whispered and moaned affectingly. The piece occupies a rare but rightful place in contemporary chamber repertoire, and Del Sol’s recording of Sculthorpe: The Complete Quartets with Didjeridu will be available in just a few days. Music Day’s opening evening concluded with the enchanting duo of pianist Eric Zivian and cellist Tanya Tomkins, heard recently at the kick-off for their Valley of the Moon Music Festival in Sonoma.

The next day’s afternoon’s offerings were generously spread between the Conservatory’s Hume Hall and the lower level’s Sol Joseph Recital Hall and Osher Salon, so it was possible for patrons to wander but virtually impossible to take it all in.

The ZOFO piano duo opened the Joseph Hall offerings alongside Sqwonk duo bass clarinetists Jeff Anderle and Jonathan Russell. The interaction between the two pairs of musicians was nothing less than fascinating, Eva-Marie Zimmermann and fellow pianist Keisuke Nakagoshi establishing a rich and sometimes turbulent undergrowth to the reed players, who perhaps inevitably evoked occasional passages of klezmer. The compositions were recent, including Russell’s own Sqwonkoforus Rex, and thanks in part to the clarinetists’ affiliation with the Friends, there will be a recording involving ZOFO and other collaborators.

In connection with the Center for New Music, Filipino-American electric guitarist Karl Evangelista and Taglish (John-Carlos Perea on electric bass, Cory Wright on tenor saxophone) took an R&B and rock route to improvised jazz in the Osher Salon, evoking similar sizzling experiments by such innovators as Ornette Coleman and the late Ronald Shannon Jackson. Unlike some other new music acts in the Music Day lineup, Evangelista saw no need to spurn melody, and his efforts, funded in part by the Friends, were stronger and more engaging for having overcome this particular phobia.

Next up in the Salon were Wild Rumpus, who seemed to draw a particularly large and enthusiastic crowd. This was a larger-than-usual chamber ensemble; the strings and piano were joined, variously, by flute, reeds, trombone, guitar, bass, and vocalists. Despite their group name, the players were coordinated by a conductor. And the totality, though often a mish-mosh of classical, jazz, and rock sensibilities, came across as a thoroughly entertaining showcase of virtuosity and imagination, presenting a composition by Chinese immigrant Yao Chen and an arrangement of Radiohead’s Weird Fishes.

The Lee Trio in Hume Hall, siblings arrayed in casual dress, further freshened Dvořák’s Op. 65 Trio in F Minor, moving athletically like a set of school soccer forwards and achieving an equally youthful sweetness and lyricism. Gojogo succeeded with differently sourced sounds in the Salon, positioning the double-headed percussion of the Indian mridang drum against violin, electric guitar, and electric bass. The fusion of North Indian affects with jazz voicings and the friendly burble of surf guitar was delightful, at once soothing and stimulating.

The schedule of performances was interspersed with intermissions, allowing attendees to wander the so-called Marketplace, on the lower level. Manning (and womaning) a set of tables were a friendly and informative set of folks representing the regions’s healthy chamber music scene. The Friends themselves promoted their ongoing SFMusic Thursdays, held at the Center for New Music, and their upcoming Presidio Sessions, comprising weekly appearances by some of the same groups featured during Music Day.

Those groups will include the Erik Jekabson Quartet, which ushered in Sunday evening in the Hume Hall. Award-winning percussionist John Santos spiced up a jazz ensemble led by Jekabson on trumpet and flugelhorn and including Grant Levin on piano, John Wiitala on bass, and Smith Dobson V, scion of a significant Bay Area jazz family, on drums. This quartet was a model of artful interaction and good taste, integrating Latino elements in jazz in a manner evocative of Blue Note record label artists of the 1960s. Santos tastefully worked shekere under Wiitala’s song-like solos, Levin tickled hints of Cubano montuno when not gloriously extending his keyboard palate in peacock fashion. Dobson made full use of his set, noteworthy especially in his cymbal work, and also paired powerfully with Santos in cut-away sessions. Jekabson’s original material was snazzily structured and confidently embraced by his fellows.