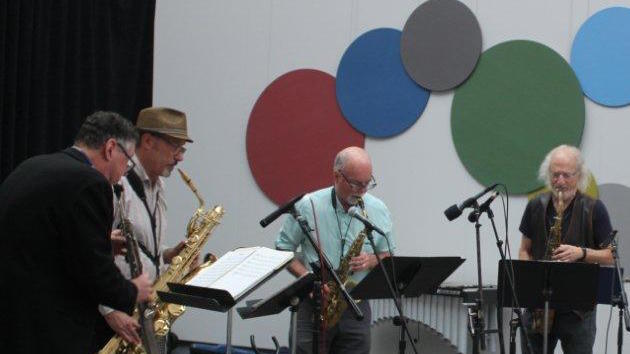 The San Francisco Friends of Chamber Music’s annual Music Day, this past Sunday, provided several thousand music fans a free and fanciful escape from the outside heat, into the excitement of a concentrated survey of 250 years of the string quartet canon.

That was the theme of this year’s Music Day Field Report, expanded to six hours from previous years’ two hours and across three of the San Francisco War Memorial Veterans Building’s four venues: Herbst Theater, the Green Room, and the Atrium Theater. The theme was introduced by a brief lecture by Kai Christianesen, earsense.org founder, musicologist, and co-curator of the Field Report, with SFFCM Board of Directors Vice President Susan Bates. 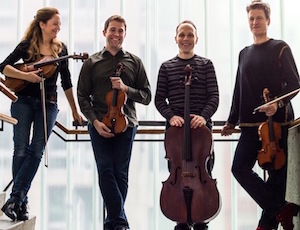 Christiansen’s Field Report essay was readable within the handsomely designed program booklet, distributed to attendees. The Bay Area is “teeming with extraordinary string ensembles,” he told the packed Atrium Theater audience, launching the first set of quartets, at noon. “We start with Haydn, and we’ll end today with today,” Bates pointed out. The Haydn String Quartet in C Major, Op. 20 No. 2 followed, performed by the St. Lawrence String Quartet.

But all afternoon and evening, there was so much happening simultaneously, inside and outside the Field Report, with 33 ensembles over eight hours in four different venues, that any attendee would be bound to miss some part of his or her wish list. In the brand new, sleek Education Studio, at the same time as the Haydn, Rent Romus’s Life’s Blood Ensemble offered a thoroughly modern mix somehow evocative of the grungy excitement of San Francisco’s Mid-Market area, where the group’s weekly venue, The Luggage Store Gallery, is located. Under the rumbling rhythms and the tongued and overblown saxes and horns, there were elements of soul and blues. Here was evidence, early in the day, of another of Music Day’s foci, jazz. The progressive approach to that genre continued in the Studio with the veteran Rova Saxophone Quartet, of which three of the four players persist nearly 40 years after their founding. Larry Ochs’s tenor sax retains its trademark hairiness, though its owner has lost some of his, and the familiar meld of consonance and dissonance was in evidence. 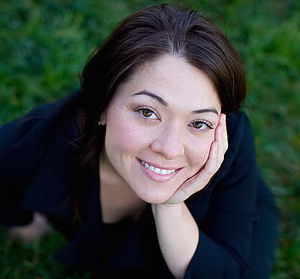 The Studio’s intimately friendly acoustics were nicely showcased in a presentation by Lieder Alive!, among the many SFFCM affiliates booked for the day. Mezzo-soprano Kindra Scharich and accompanist George Fee shared a sample from the longer liederabend program scheduled for the Noe Valley Ministry on October 2. Scharich proved multiply gifted, securing a dynamic range from forte declaration to muted, but clearly audible, pianissimo. And more than the multitude of both recital and operatic vocalists, Scharich was successfully, visibly theatrical, her face and posture conveying stories of love and longing, even to those of us unable to fully translate the German texts of Schubert, Schumann, Liszt, Brahms, and Hugo Wolf. All these composers would have celebrated her services, as should all of us. And Fee’s piano approach, variously tender, crisp, and gleeful, provided gratifying support to the singer.

The Friends’ Bates found herself wandering across the Marketplace area in the ground floor foyer, where various presenters were at tables promoting their programs. “That’s why we do Music Day at the beginning of the concert season,” Bates explained. Her mission of the moment was distributing last-minute program inserts heralding last week’s announcement that the Telegraph Quartet had won the 2016 Walter M. Naumburg Chamber Music Competition in New York City. Outside the artists’ waiting room, Bates welcomed the arrival of the four victors with, “I’m so happy for you guys, oh God!” Joseph Maile, one of the Telegraph’s violinists, posited Music Day as an ideal site of celebration. “I don’t know any other place like this in the world,” he testified, “where a whole chamber music community can get together and have a party.” “And no quartet is identical,” chimed in Pei-Ling Lin, his wife and the ensemble’s violist. “Yes, we’re always learning from our colleagues here,” Maile continued. “We see in their music what we might not yet have, what’s fresh.”

The Green Room, refurbished before Music Day’s first visit there a year ago, was filled beyond its 300-seat capacity for the Telegraph’s appearance in the second “chapter” of the Field Report. The ensemble’s adrenalin almost seemed to be rushing them a bit through the faster movements of Dvořák’s String Quartet in A-Flat Major, Op. 105, but it fit well the composer’s affection for dance and exuberance, and the romantic elegance of this period in the evolution of the quartet canon was irresistibly conveyed. The Chamber Music Society of San Francisco’s ensemble moved the Field Report forward into the 20th Century with Ravel’s String Quartet in F Major. The players seemed seamlessly coordinated and empathetic, qualities vital to the composer’s languorous washes of harmony, seasoned with Iberian references and at times evocative (with pizzicatti) of the guitar. The audience’s impulse to applaud each movement was graciously welcomed by the ensemble. 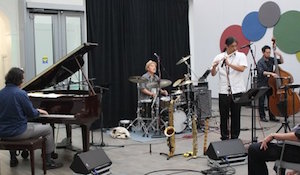 This reviewer was unable to remain until the 8 p.m. close, and had to forego an evening featuring a variety of jazz, world, new music, and chamber ensembles, including the “today” chapter of the Field Report (with the Del Sol, the Quartet San Francisco, and Kronos). But drummer Akira Tana’s Otonawa ensemble ended the afternoon with a lovely session of Asian-imbued jazz. (The name of the group, which will be touring northern Japan over the next few weeks, means “Sound Circle” in Japanese.) Masaru Koga deployed a variety of saxophones and a Japanese flute, but all of the players on fixed instruments — Ken Okada on acoustic bass, Ben Stolorow on piano, and leader Tana on drums and percussion — drew on an amazingly diverse palate of tones and timbres, appropriate to the evocative folksiness of much of their original material. After the appealing ballad “Stars Across the Ocean”, dedicated to the survivors of the Japanese tsunami and earthquake of 2011, a woman standing rapt at the side of the hall commented, “This is the most beautiful music I’ve heard today!”