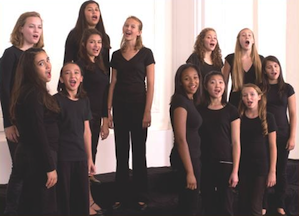 Until the blockbuster film starring Russell Crowe as the title patriarch was released last weekend, the story of Noah and his divine mission — to preserve human and animal life while the Lord took watery revenge on erring humankind — was best known from its account in the Bible’s Book of Genesis. The imagination of English composer Benjamin Britten was no doubt inspired by this tale when he boarded in an Anglican school as a teenager. After he’d set it as a one-act opera in 1957, Noye’s Fludde (Britten took the spelling of the title, and much of the text, from a 15th-century “miracle play”) was first performed in the Anglican Orford Church in Suffolk, the site of the annual Aldeburgh Festival, founded by Britten, his life partner Peter Pears, and librettist/producer Eric Crozier nine years earlier.

The several Noye’s Fluddes I’ve seen live over the years have occurred in Christian churches, as did the production that plays a pivotal part in the film Moonrise Kingdom, reviewed by me in 2012. But the story of Noah, with alterations, can also be found in the Koran and in the Torah. So it shouldn’t have been out of place on Saturday for the San Francisco Girls Chorus (SFGC) to have staged its benefit gala production of Noye’s Fludde at Temple Emanu-El in San Francisco’s Presidio Heights, the house of worship of one of California’s oldest Jewish congregations.

The Byzantine Revival design of the Temple’s prayer hall made for an inspiring, evocative venue. The interfaith transposition, though, prompted one alteration to the score, right off the bat. The text of “Lord Jesus, Think on Me,” one of three Anglican hymns borrowed by Britten, was altered to “Lord Father, Think on Me.” There were no further references to the Christian savior.

Other departures from my earlier Noye’s experience were more obvious and contentious. I suspect that most of these were mandated by the challenge of casting of what appeared to be both the 35-member Girls Chorus and a large portion of the 400-member SFGC School. This substantial and talented resource had to be matched to roles that Britten originally intended for a pair of professional singers (Noah, a bass or bass-baritone; and Mrs. Noah, a mezzo-soprano), a dozen or so stand-out youthful singers (Noah’s three sons, their wives, and Mrs. Noah’s Gossips), and maybe a few score younger singers who usually are recruited from the congregation or community (the animals boarded on the Ark).

The level of vocal artistry in this production was reflective of the artistry of SFGC Music Director Valérie Sainte-Agathe … and of each and every one of the SFGC choristers.

Most productions of the work have stuck to the limits of the Aldeburgh original. But with its bolstered pool of eager participants, SFGC chose to assign groups of five or so girls to act as each of Noah’s three sons and their spouses. Aside from the absence of the boy trebles who would normally depict Sem, Ham, and Jaffett, you might view the SFGC approach positively as vocally strengthening each one of the six roles, and negatively as blurring their theatrical interaction both with their parents and with each other. The inevitable confusion wasn’t helped by an almost complete lack of costuming, except for the robed Noah. (Older SFGC choristers were garbed all in black slacks and black leotards, their younger colleagues in black-and-white shifts.)

The all-or-none decision on costuming may or may not have been prompted by budgetary constraints, which may or may not have also applied to the complete absence of sets and props seen in other productions. While the choristers did their best to mime the process of building the Ark, it wasn’t quite enough to set the scene. Similarly, at the point in the story when the deluge commences and Mrs. Noah’s Gossips are sent scurrying, there was no depiction of waves to motivate them.

The imagination and joy of the score were well-served, not only by the splendidly trained choristers … but also by their two guest professional vocalists.

A virtue of this production was the uniformly high level of vocal performance, reflective of the artistry of SFGC Music Director Valérie Sainte-Agathe (who conducted) and of each and every one of the SFGC choristers, who sang with impeccable tone and timing. Bass-baritone Joe Chappell, principal bass soloist with Holy Trinity’s Bach Vespers in New York, centered the saga with a wonderfully warm and empathetic depiction of Noah as a God-loving man on a mission.

Silvie Jensen, an SFGC alumna, brought shining spunk and a vibrant mezzo vocalization to her role as Noah’s wife, bonding with her spiteful Gossips until she’s convinced to get on board the Ark (rewarding her concerned husband with an amusing slap on the face). Jensen also set a standard for convincing dramatic presence that seemed difficult to disseminate to the choristers. The Voice of (the unseen, amplified) God came from American Conservatory Theatre (ACT) Artistic Director Carey Perloff, who effectively conveyed the wrath, commands, and ultimate blessing of the deity with a California accent and a female affect, in a role usually assigned to a sonorous male.

One of the most titillating aspects of Noye’s Fludde has always been the parade of animals onto the Ark, two of each species, intoning “Kyrie eleison” as they come. In productions I’ve seen, this involved a procession of children up the central aisle of the church, all in costumes, the size of the animal descending with the age of the actor, and the sound of the voices rising in pitch, from low-growling bears to squeaking cats and mice. Since the SFGC production was not costumed, and since there was also no parade as such (and no Ark to enter), choristers of various ages moved in swirls around the central performance area, carrying animal cutouts, artfully wrought by the Creativity Explored studio.

The roles of the Raven and Dove sent out by Noah to look for land, written to be danced, were here enacted in the form of cutouts of the birds, carried about by a pair of choristers. This production thus proceeded without two assured crowd-pleasers: kids costumed as cute animals, and kids dancing.

Still, the imagination and joy of the score were well-served, not only by the splendidly trained choristers, whose parts Britten had set mostly in unison but sometimes in unorthodox melody lines, but also by their two guest professional vocalists, who sang material that’s more complex and evocative of Britten’s full-length operas. There was also a skilled and dynamic concertino instrumental ensemble, drawn in part from the San Francisco Conservatory of Music. Britten’s score invoked majesty from this small number of musicians from the get-go, with the subtly altered voicings with which the solemn opening hymn is enhanced (as were the later two). The cataclysmic storm arose, played out, and was resolved by Britten with the same sort of magic reflected in the “Sea Interludes” from his opera Peter Grimes; this guy knows what to do with water. The music for Raven and Dove were two charming etudes, the first a delicately melancholic waltz for four-hand piano (Susan Soehner and Susan Blinderman) and the second impressionistically transcendent, involving tongue-warbled treble recorder (Letitia Berlin). Reinforcing key scenes were the Temple’s pipe organ, played by Rodney Gehrke, and its bells.

The audience in the packed prayer hall seemed properly appreciative of the performance, though reluctant to participate themselves in the singing of the three hymns, in spite of Britten's intended community outreach and the inclusion of the texts of the hymns in the prorgrams handed out at the Temple. Whether the reluctance stemmed from matters of faith or from the absence of direction from the conductor is open to speculation. But as we look toward the SFGC’s upcoming, exciting program of Stravinsky, Poulenc, and Fauré on June 14, we might also hope not to have to wait so long for another showcase of this delightful Britten jewel.