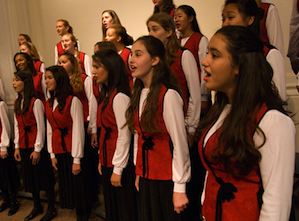 The chorus and the chorus school are under an interim Artistic Director, Brandon Brack. Their former director departed unhappily, and took many of her singers with her. It will take some time to bring the touring chorus back to its former eminence. This concert gave much reason to hope.

The girls sang with a clear, unforced pleasing sound. The choral parts for the first half — by Baldassare Galuppi, Nicola Porpora, and Vivaldi — left an impression of blandness. Blame the composers.

Among the soloists, Jennifer Ellis Kampani was a standout, and Danielle Reutter-Harrah a good match for her in several duets. Alto Abigail Fisher is a strong musical force, but seemed to be from another planet than that of the orchestra and the other soloists. Her vibrato is wide enough to compromise intonation, and she sang some strange cadenzas.

Jeffrey Thomas and his all-star orchestra gave splendid support to the singers. Special mention should be made of Kampani's superb performance of Vivaldi's Domine Deus, Rex Coelestis, accompanied by some nice flights of fancy by oboist Debra Nagy and some inventive bass lines from continuo cellist William Skeen.

Finally, I have to say that the chorus singers looked great in their long black sleeveless gowns, with red flowers in their hair.