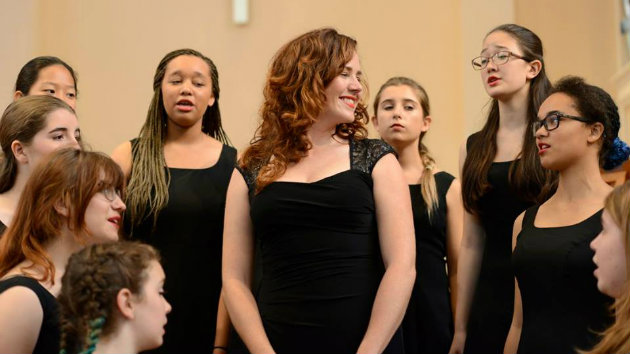 In collaboration with New York-based early music ensemble TENET, the San Francisco Girls Chorus (SFGC) opened its new season with a concert that was as intriguing and mesmerizing as the stories behind it. On Oct. 30 at the Mission Dolores Basilica the young women of SFGC and their music director, Valérie Sainte-Agathe, presented a series of compositions by women composers of the Italian Baroque, most of whom were nuns, in a performance titled “Surprising Freedoms: Music from Behind Convent Walls.”

In the 17th Century, female musicians had few options to develop their musical talents and practice their art, other than within the confines of a convent. Often the daughters of prominent and wealthy families, monastic life gave them the independence to be professional composers and even have their work published, although most of it was written for use within convent walls, performed by women only.

The women of SFGC entered the Basilica as they sang the piece. In their long black dresses, with black scarves draped over their heads, they conjured up the image of a group of 17th-century nuns, which immediately set the tone for the concert with great dramatic effect.

The visual impact of the opening was accentuated by the spatial placement of the chorus members. Positioned around the audience in the front rows, the soloists who carried Hildegard’s haunting melody each came from a different direction. From her podium in the crossing of the Basilica, Sainte-Agathe gave the soloists complete freedom and only conducted the other singers in the accompanying hummed drone. 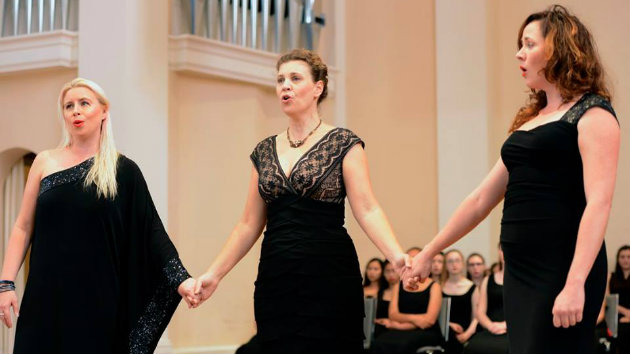 This stunning opening sequence started a tightly directed, 75-minute performance (designed by staging director Charles Otte), in which the singers of SFGC and the members of TENET were beautifully and evenly matched, both musically and theatrically.

SFGC is a vocal ensemble of immense flexibility with a sound that is both homogeneous and distinct. The girls’ voices blend beautifully, and the soloists and small ensembles from within the group are excellent. The chorus sang the entire program from memory, and there was neither a note out of place nor did the performance seem over-rehearsed. Quite the contrary: The concert was lively and fresh throughout. One of its many highlights was Duo Seraphim by the Benedictine nun Caterina Assandra (ca 1590-after 1618) in which the girls were simply fantastic.

Early music ensemble TENET delivered its own highlights, for instance in Ad arma, o spiritus rebelles (“To arms, o warring spirits”) by Isabella Leonarda (1620-1704), an Ursuline sister who became mother superior of her convent and was one of the most prolific woman composers of her time. It was almost like a mini-opera, with short arias and recitatives, solos and duets and instrumental interludes, with SFGC temporarily transformed into a living backdrop.

She did so with a powerful yet subdued sense of drama, and her sorrow and lament were warm and sincere.