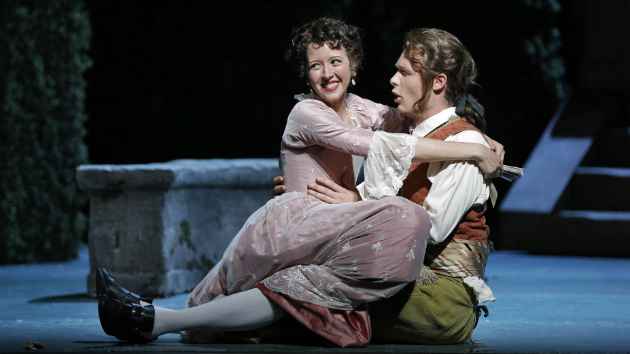 San Francisco Opera opened a well-sung, effervescent revival of Le Nozze di Figaro on Sunday afternoon. This is the eighth outing of the Goya-inspired production from 1982, this time distinguished by the S.F. Opera debut of director Robin Guarino. Her detailed staging requires much physicality but never gets in the way of Mozart's sparkling music —  expertly handled by Maestro Patrick Summers and a fine cast.

Guarino brought a freshness to the traditional, 19th-century Spanish costumes and sets by employing lighthearted gestures or facial expressions at precisely the right moments. The youthful cast performed gamely without ever compromising the line of the music. The finale of Act II was particularly amusing as Figaro slyly mocked the Count and derided the drunken gardener Antonio — his physical carriage also conveying what is in the libretto and score.

Summers had the orchestra playing with a fluid serenity. The fortepiano, played by the maestro, was tasteful and even. The music from the pit was slightly ahead of that from the stage, yet the no one sounded rushed. It seemed that the orchestra was simply floating and buoying the singers along.

The imperfect synchrony was most noticeable in the chorus, which could have been more focused. Considering how much novel music the chorus members have learned for the summer, it is reasonable they were more relaxed in this familiar warhorse.

Lisette Oropesa is a charming Susanna. Her voice has a gorgeous delicate quality to it but still has volume. Her "Deh vieni, non tardar" was unstrained and she managed to do a perfect martial arts flip of Figaro when she loses her temper with him later in the act. Likewise, Philippe Sly is a prepossessing Figaro, with a rich sound and a physical grace that serve him well. He seemed comfortable in the role and completely at ease in his arias.

Luca Pisaroni was a menacingly attractive Count. His voice has taken on more weight and has a more burnished sound than in previous appearances. He also moves well and with confidence. Nadine Sierra's Countess showed a convincing flirtatiousness. Sierra and Oropesa both have slim builds and are close to the same age, so the mistaking one for the other in Act IV actually is convincing. Sierra's sound is silvery and brilliant. "Dove sono i bei momenti" showed off the exquisite control she has over her voice.

Kate Lindsey is the ideal Cherubino; her lankiness is appropriately boyish and her voice sparkles. Her "Non so più cosa son" was vivid but clean and her "Voi che sapete" was lovely. Her movement was also appropriately unfeminine and she even turned a cartwheel in Act IV.

Adler Fellow Maria Valdes was a sweet Barbarina, plaintively singing her aria in Act IV. Bojan Kneževiċ made the most of his small role as intemperate Antonio and got a lot of laughs as he trimmed hedges in the background during Act III. Greg Fedderly was a wonderfully priggish Don Basilio. John Del Carlo was a hilarious Doctor Bartolo; his voice is strong and his patter impressive. Catherine Cook minced and huffed as Marcellina; it is a shame her Act IV aria was cut, as usual. John Easterlin (Don Curzio) ably contributed to the funny sextet ("Riconosci in questo amplesso") in Act III.

In this well-rehearsed production, everything cohered into a performance that was gratifying on many levels.