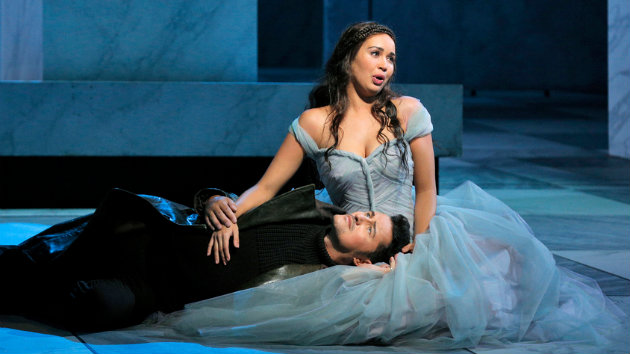 Lucia di Lammermoor takes place in a strange world: Donizetti’s and Cammarano’s Italianized interpretation of Sir Walter Scott’s romanticized, pseudo-historical Scotland. So why not go a step further and set it in the future as well?

That was the promise and premise of Michael Cavanagh’s new production, running at the War Memorial Opera House, Oct 8-28. The San Francisco Opera has been billing the production as “untraditional.” It doesn’t feel that way. The setting may be a corporation-driven future rather than a family-driven past, but the costumes and sets are still firmly historically inspired: suits for the men, hoops for Lucia, and lots of marble on the stage. Mattie Ullrich’s costume designs reach their most daring point during the wedding party, where women in jewel-toned formal dresses sport giant floral fascinators. Between the scenes, bland projections of the rolling ocean are occasionally replaced by pictures of the Scottish hills or video loops of a thunderstorm.

Good acting and stage direction keep Cavanagh’s production from seeming static, but they don’t motivate it. No unique perspective on Donizetti’s opera ever becomes apparent, and the word that comes to mind is not “visionary” but “stylish.” Everything from Gary Marder’s crisp lighting to the well-arranged bloodstains on Lucia’s bridal bed is tastefully, artistically designed. Perhaps this production is a reflection of the bel canto genre: aesthetically pleasing, but sometimes shallow-seeming in its beauty.

Diana Damrau was originally slated to sing the title role, but when she announced a period of vocal rest, Nadine Sierra stepped in. While Sierra’s name doesn’t yet have the same star power as Damrau’s, her voice promises that it will someday. She executes Lucia’s demanding cadenzas with precision and pure, bell-like tone. Her voice is on the light side even for bel canto, but it contains a wonderful variety of both hollow and full textures. Sierra’s mannerisms are also spot-on: the way she tilts her head and smiles is endearingly adorable in the first act and frighteningly unhinged in the third. 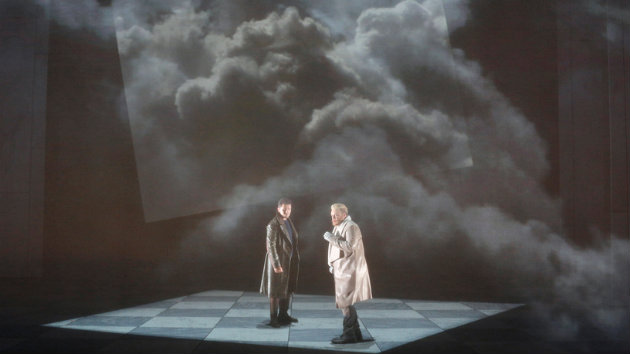 The dramatic star of the Oct. 8 performance was Piotr Beczala as Edgardo. He first entered the stage with a brisk, business-like air but quickly became tender as Lucia mourned his departure. The inclusion of the usually cut “Wolf-Crag Scene” gave him scope to show ferocity and anger before turning to suicidal despair. That scene also highlighted Beczala’s vocal talents: his bright, expressive tenor blends wonderfully with Brian Mulligan’s darker baritone voice. Mulligan excels at acting furious and vengeful, but his Enrico is so convincing in those moods that his flashes of remorse are difficult to credit.

Among the rest of the cast, Nicolas Testé impressed as the chaplain Raimondo with his full, gravelly sound. Zanda Svede provided a nice dose of smooth-voiced, practical sanity as Lucia’s companion Alisa. Chong Wang’s tenor held plenty of ping, which he deployed to good effect in the small role of Arturo, Lucia’s intended groom. A.J. Glueckert rounded out the principal cast as the frighteningly callous and unfortunately hard-to-hear Normanno. 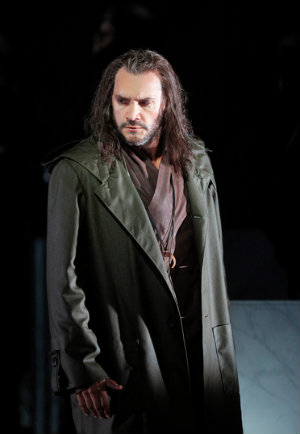 Maestro Nicola Luisotti led San Francisco Opera’s 62-piece orchestra in a safe rendering of the score. There were no musical revelations to be found here, but there were also no major missteps: tempi and emphases were consistently appropriate. Unfortunately, the volume was not so well calculated. The baritones’ and male choristers’ voices were drowned out by the instrumentalists at times. Special commendation is due to flautist Julie McKenzie for her skilled solo accompaniment of the traditional, difficult mad scene cadenzas.

Thanks to Donizetti’s writing and Beczala’s and Sierra’s chemistry, this Lucia di Lammermoor packs the satisfying emotional punch of well-delivered tragedy. Neither the staging nor the playing offer much novelty, but both provide a solid backdrop for a talented cast of singing actors. That’s what matters, and it’s what makes this show so good.