Back in 2001, when Pamela Rosenberg arrived as general manager of San Francisco Opera, her plans included an ambitious survey of the major operas of Hector Berlioz and Leoš Janáček. With the economic downturn and Rosenberg’s departure from the company, only one opera by Berlioz and three by Janáček made it to the stage of War Memorial Opera House. Now, in the fourth year of David Gockley’s tenure, the company has finally gotten to The Makropulos Case, Janáček’s penultimate opera, in a coproduction with the Finnish National Opera. 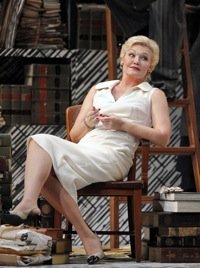 Makropulos is a fabulous piece in both senses of the word, with restless, sharp-edged, brilliantly scored music in the composer’s highly individual late style, and a plot that has Faustian and comedic elements. Based on a play by Karel Capek, it tells the story of the mysterious and seductive diva Emilia Marty, who appears in Prague one day in 1922 possessing knowledge that no living woman should have and precipitating an assortment of crises and conflicts among the other characters. At two and a half hours (with intermission), it’s a short opera, but the plot is complex and as confusing as that of Simon Boccanegra. You’re always trying to remember who’s who because of the constant discussions of long-dead relatives of the characters.

Happily, the production, the last of the fall season, is a roaring triumph in nearly all ways, starting with a stunning performance by Karita Mattila in her role debut as Marty.

It’s rare to find a perfect match of performer and role, yet Mattila as Marty is just that rarity. She’s beautiful and naturally glamorous, an eye-catching creature of the stage who looks entirely at home in the 1950s couture-style dresses in which set and costume designer Frank Phillipp Schlössmann clothes her. And her splendid soprano — large, clear, and cool-toned — has just the right character for the sometimes-icy, sometimes-desperate Marty. We believe without question that most of the men on stage, and one of the women, fall completely under her spell. 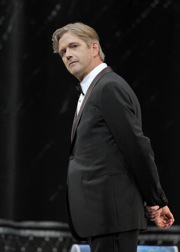 The Makropulos Case isn’t a one-woman show, however dominant Marty’s character is. Debuting bass-baritone Gerd Grochowski sang beautifully, and made a strong and sympathetic Baron Prus, whether horrified by Marty’s coldness or distraught over his son’s suicide for the love of her. Tenor Miro Dvorsky was a delightful surprise; last heard here miscast as Cavaradossi and Alfredo Germont, he was a persuasive, strong Albert Gregor, far more comfortable and idiomatic in Czech than in Italian.

The current and former Adler Fellows in the cast made a fine showing, as well. Susannah Biller’s light soprano was a good fit for the young, stagestruck Kristina, who worships and wishes to emulate Marty — to a point. Maya Lahyani (Cleaning Woman, Chambermaid) and Austin Kness (Stagehand) were funny and humane as the working-class counterpoints to the squabbling aristocrats who dominate the plot. Brian Jagde sang well, but anonymously, as young Janek Prus, who abandons Kristina and dies over Marty.

Thomas Glenn was an able Vitek, the law clerk, and Matthew O’Neill a hilarious Count Hauk-Sendorf, who had been a lover of Emilia Marty’s in one of her previous incarnations and wants to be reunited — even though he’s now an old man and she is, apparently, 30 years old.

But one important role could have been better cast, that of Dr. Kolenatý. On opening night, Wednesday, the veteran bass-baritone Dale Travis unfortunately sounded worn and out of sorts. 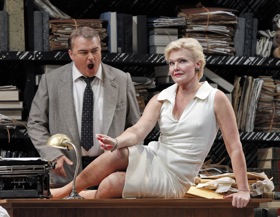 Mattila herself requested Jiří Bělohlávek, a preeminent Janáček conductor, who provided a masterful account of the score. Makropulos’s complex plot and the style of the vocal writing make it a talky opera, with only one real set piece. Bělohlávek’s tempos flowed naturally with the Czech language and enabled the singers to voice the text without undue difficulty.

He balanced the instruments and sections within the orchestra well, though at times only Mattila and Grochowski had sufficient power to be heard easily over the big orchestra. The other singers sounded pressed too often, and, for their sakes, I wish he’d cut the orchestral volume down.

The handsome physical production, by Olivier Tambosi with costumes and sets by Schlössmann, uses a palette of silver, gray, black, and white, very chic, with spare stage sets for the theater in Act 2 and the hotel room in Act 3.

Yet Tambosi sets the action not in 1922, but in the 1950s. The press kit says that he wanted to “make it more contemporary for audiences.” I find this puzzling; the 1950s are not exactly contemporary in 2010. Moreover, Prague in the 1950s was under Communist rule, and it’s hard to imagine that there would still be a Baron Prus, let alone that he would be involved in a Jarndyce-like, 100-year-old lawsuit over who owns a country estate. The government would have long since claimed for itself any property owned by the nobility and in dispute. 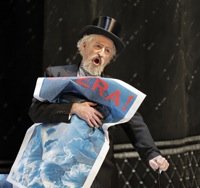 Tambosi also chose to place a large clock, running in real time, in each of the three sets, which I found extremely distracting. The audience doesn’t need to be reminded that Emilia Marty has a different relationship with time than the average person, and it seems counterproductive to constantly remind the audience of exactly how long the opera is. This reification of the idea of time is similar to the giant rocks onstage during Tambosi’s Jenůfa production, which reify the Czech idiom of having a rock in one’s heart, the equivalent of the English-language phrase having a heavy heart. Such distractions, which are obvious and add nothing to the production, should be edited out in future revivals.

That said, the direction of the singers is, by and large, effective and appropriate. Tambosi emphasizes the comedic aspects of the opera more than one might expect, and there was a good bit of audience laughter through the evening. I especially liked his handling of Prus’ misery after learning of Janek’s suicide, and the shocked horror of the other characters during Marty’s “Liebestod”-like final scene, in which Mattila was magnificent vocally and dramatically.

He did a fine job overall with Mattila, who started from a place of dominatrix-like power and became increasingly desperate over the course of the evening, progressing to vulnerability and some tenderness as she finally embraced her own mortality. She was both hilarious and horrifying after drinking a great deal of whiskey, for courage. Sometimes there was inappropriate laughter, though; surely the audience shouldn’t laugh at Marty’s monstrous exit line about getting dressed and having some eggs, so soon after Janek’s suicide and in the midst of her confrontation with Kolenatý and the others. And Tambosi goes seriously wrong in having Gregor, rather than Kristina, burn the formula. For Kristina, it’s a proper renunciation of the horrifying, yet tempting, possibility of becoming Marty, and the character deserves to keep that final realization.

The Makropulos Case was last heard here in 1993 under the baton of the late Charles Mackerras. Sir Charles was for 50 years the greatest advocate for Janáček outside Eastern Europe, and the present production is dedicated to his memory. Given the success of the production, the company could further honor his memory by bringing From the House of the Dead or The Excursions of Mr. Brouček to San Francisco.