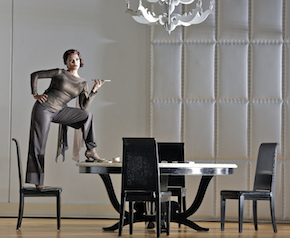 The San Francisco Opera took Handel’s comic opera Partenope a few strides beyond his own parody of opera seria conventions into satire, even camp, and then burlesque. Happily, since the name of the game remains “music” and especially vocal virtuosity, the art was respected in the gambol that is Christopher Alden’s staging. Unlike the disastrous 2002 staging here of Handel’s Alcina, the soloists’ arias were not sabotaged by monkeyshines upstage. While the stellar Danielle de Niese or her colleagues were singing the sensational, florid arias, the stage activity was in ultra-slow motion, and curiously undistracting.

From the outset, the audience was set up to accept the unexpected.

Partenope comes from the Greek parthenos (“maiden’s voice”) but this opera’s dominating woman, named after a siren who failed to entrap Odysseus, is no maiden. More of a femme fatale, she is passionately and, as shown explicitly here, actively attached to Arsace (the great countertenor David Daniels). She also reciprocates when her enemy Emilio embraces her before rejecting him. Finally, she winds up in the arms of the other countertenor, Arminio (Anthony Roth Costanzo) who has been haplessly mooning after her for two hours and 40 minutes (not including intermissions). That’s without the more than eight numbers that were cut — a long song.

The second take-off or parody by Handel and his librettist (unknown) is on the then already common device of a woman masquerading as a man. Rosmira, the Argentinian mezzo-soprano Daniela Mack, appears disguised in order to either punish or recapture her Partenope-ensnared lover Arsacio, It’s all about love-hate and the battlefield of love. This is where the plot thins but the humor in the staging keeps getting cleverer. 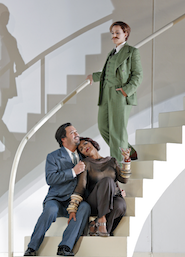 The production, designed by Andrew Lieberman, with costumes by John Morrell, opens on a gleaming white opening set featuring spectacular sweeping stairs. Early on, Arminio (Costanzo) pratfalls down the stairs, singing as he clambers up to cling to them. The audience has already been puzzled by the character who turns out to be Emilio (Alek Shrader) peering through a white rectangular sheet of paper as a mask and wandering about with flash camera. (This turns out to be a recurrent motive, the camera presumably signifying the characters being revealed.)

Perhaps connected to that idea, gas masks passed around by Partenope briefly serve as facial covers. Along with Partenope’s romancing, playing her as a driven, aggressive predator, de Niese gets to sing one knock-out aria after another. Her soprano is among the most beautiful of the generation, crystal clear, shimmering, continuously vibrant and exciting. The technical display dazzles. Not to put her colleagues in the shade. They’re too good. Daniels, taking his turn at the roulade and fioriture-laden music, “I? Leave you?” being a capper. He was his as-ever top-notch counter-tenor. Later, with Arsace’s sleep aria, “Mà quai note,” he would work his expressive magic. Costanzo’s counter-tenor, while not as big and commanding as his colleague’s, was fluid, true and his singing musical. Mack’s arias were strong and also virtuosic, befitting the trouser-role character. She has the opera’s single stop-time contemplative piece, an exquisite accompanied recitative that she sang lovingly. 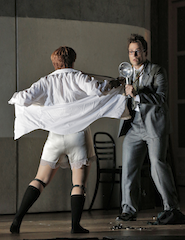 Like Arsace’s sleep aria that it follows, it was also set apart by its gentle accompaniment by two flutes, muted strings, pizzicato basses, and theorbo. The conductor was Julian Wachner, the highly regarded conductor of the musical groups at New York’s Trinity Church and others ensembles including the Washington, D.C. Chorus. Conducting from one of the two harpsichords used, he drew a fine, early music-styled performance from the orchestra and rendered the score with a lively, rhythmically crisp, yet expressive continuity.

Meanwhile, of course, a lot was going on the stage and while not musical, at least it was not anti-musical. The company’s commentary described the production concept as DaDa/Surreal, the setting in 1920s Paris, the aesthetic, “after Man Ray.” A door with a frosted glass panel in the center of Act 2’s wall opened to reveal a toilet, a character, fully clothed, ensconced on the commode. After defeating Emilio in his war on Partenope, Arsace locked him into the toilet. Later, climbing the inside of the door to the opened transom, and hanging half-through the transom, Alek Shrader as Emilio sang a stirring aria, his tenor as bright and shining as the music. Throughout, he and most of the other characters do a lot of faux-cigarette “smoking,” in stress situations. It was the twenties, after all. 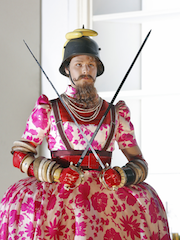 Next, Act 3 reveals a third wall (great for acoustical backing) on which Shrader is pasting panels of paper that form, sort-of, the upper half body of a naked woman. Shrader, now an accessory character, “the photographer,” shows a brief movie of abstract patterns on the wall. Frustrated, he rips up the film, does a funny hand-characters shadow play using the projector’s light, sings a ripping tenor aria, to a deserved acclaim. As Oronte, a secondary character, Philippe Sly, sang in a good, firm bass-baritone. Later on, Costanzo as Armindo does an amusing tap dance routine, complete with top hat and, tossed from the wings, cane.

Rosmira, out to show up her faithless but still beloved Arsace as a coward, challenges him to a duel but he outwits her, insisting that it be fought bare-chested. She gives up and reveals her true identity and former relationship to Arsace. Now furious at Arsace, Partenope denounces him and takes up with Armindo. Happy ending, or maybe.

As successful as this production turned out to be, musically, creatively, given its length, there were early leavers. They lost. With this production and those that preceded it, the company is on track for one of its vocally finer seasons.