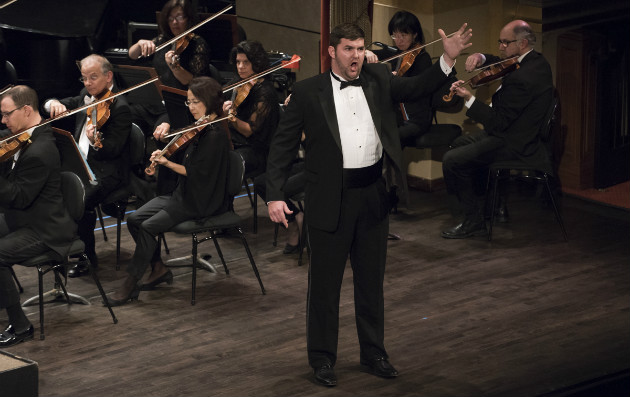 Relocated to the restored Herbst Theatre, after last year’s edition at the Scottish Rite
Masonic Temple, San Francisco Opera’s annual Adler Fellows Gala Concert made a big impact on Saturday, Dec. 12. Part of that had to do with the scale of the stage and house, where a full orchestra and some dynamically powerful young voices had a pedal-to-the-metal effect on the audience.

From bass baritone Matthew Stump’s thundering account of an aria from Handel’s Rinaldo to a harrowing final scene from Tchaikovsky’s Eugene Onegin, performed at a fevered emotional pitch by soprano Julie Adams and baritone Edward Nelson, the intensity level was set and sustained at a high level.

But the size and volume of the voices – large sometimes to a fault – were only the surface attributes of the evening. It was the mastery of both the technical and theatrical aspects of opera in this aria-and-ensemble anthology that so consistently impressed. One after another of the performers came across as musically and dramatically stage ready. Indeed, the Adler Fellows are familiar to S.F. Opera patrons for their often highly accomplished appearances in the company’s mainstage productions.  “The Future Is Now,” as the company’s billing aptly puts it.

In several standout cases, the potency was all the more effective for being channeled and artfully contained. Mezzo soprano Zanda Švēde was an early winner, with a subtly ravishing number from Tchaikovsky’s The Queen of Spades. Singing mostly with her hands at her side, this strikingly dark-haired and dark-eyed singer captivated with a lush tone, spacious tremolo, mouth-filling Russian diction and soulful phrasing. The character of Polina, musing on love and death, was fully present in this sublimely confident performance.

Švēde was just as formidable, after intermission, as the self-possessed and fury-filled Dalila from Saint-Saëns’ Samson et Dalila. Working opposite Stump’s High Priest, this gifted mezzo once again used her stillness and economical gestures to heighten the dramatic stakes. 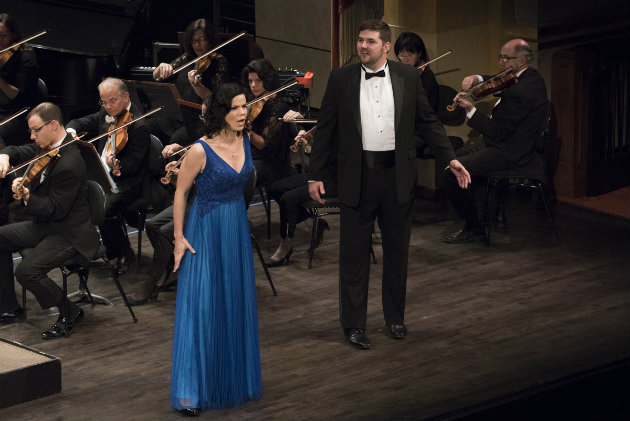 Masterful in a completely different mode was Nelson’s suave and tenderly comic turn as a Pierrot figure in Erich Wolfgang Korngold’s Die tote Stadt. Spinning out his baritone in plush, long lines with pillowy-soft landings, Nelson brought the crooner’s grace of Sinatra to mind on the 100th anniversary of Ol’ Blue Eyes’ birth. Not to push the comparison too far, but Nelson, like Sinatra, brought a mix of irony and nostalgia to his Korngold tune. Posing with one, striding foot forward, this handsome, fair-haired artist projected the winning self-assurance of someone ready for his camera close-up.

Baritone Efraín Solís flashed his comic chops in Figaro’s famous patter-song, “Largo al factotum,” from Rossini’s The Barber of Seville. Raffish and buoyant as his singing was, Solís earned an extra merit badge for the way he worked a ringing cellphone into Figaro’s preening. Without dropping a beat, he mimed answering the call. It was a demonstration of the singing actor’s need to be in the moment, never lose focus, and be ready to react to anything.

Next up were Chong Wang’s urgent crowd-pleasing tenor exclamations as Manrico from Verdi’s Il Trovatore. Who cared if his voice sounded uncomfortably stretched here and there? The effort was part of the payoff, a point of identification for all the shower tenors in the audience.

There were, as is the case in any program of different singers and contrasting material, some numbers that didn’t register as persuasively as others. Mezzo-soprano Nian Wang looked and sounded a little stiff-jointed in an extended Haydn concert aria. Its inclusion may have been the one programming glitch of the night. Soprano Jacqueline Piccolino handled the bel canto pyrotechnics of “Bel raggio lusinghier,” from Rossini’s Semiramide, without quite capturing the exuberant joy of all those glittering ornaments. Bass Anthony Reed blustered his way through a comic, military set piece from Ambroise Thomas’ Le Caïd, uneasily at first and then with growing command. 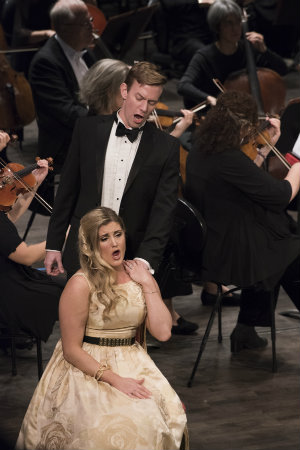 Even with all the firepower and flourishes that preceded it, the show-capping Eugene Onegin love scene raised the level. Here, in the most fully dramatized excerpt of the night, Adams and Nelson embodied Tatiana’s and the title character’s roiling passions in voice, body, and deed.  They tore at each other with their eyes and hands, their raw, hot-blooded vocal lines and tragic, vaulting declarations.

It was thrilling stuff, which made the evening gown-and-tuxedo formality of this gala vanish. The audience was plunged into the middle of Tchaikovsky’s turbulent love story, with nothing held back. When Adams tore offstage, leaving Nelson alone and down on one knee in misery, no one needed to know a word of Russian to feel what they’d been through. These two fine singers had left it all out there, unambiguously, onstage.