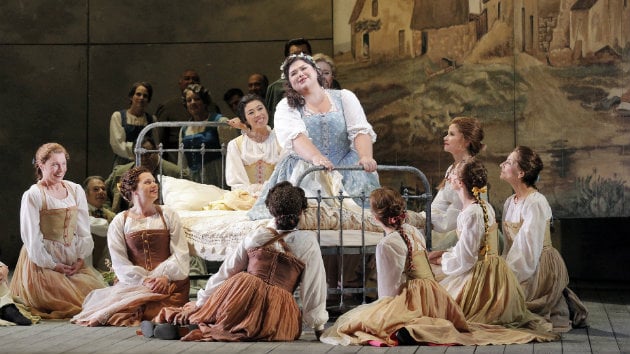 San Francisco Opera began its 93rd season on Friday with the usual dinner, ball, speeches, and, of course, an opera performance. For opening night, the company chose Verdi's Luisa Miller, which dates from just two years before the composer's first unequivocal masterpiece, Rigoletto. Like Rigoletto, and other works to come, Luisa Miller features a close relationship between a father and his daughter, and the disaster that results when a commoner woman loves a noble man.

But compared to the tightly-plotted, melody-rich Rigoletto, Luisa Miller is rather thin stuff, spreading too little plot across too many characters and too few great arias. Some of the most memorable music is for the principal clarinet, rather than any of the characters, and Jose Gonzalez Granero played it gorgeously. Luisa, the titular character, is the daughter of Miller, a retired soldier. She loves, and is sincerely loved by, Rodolfo, son and heir of Count Walter, the local ruler, and known to her only as Carlo. Walter's retainer, Wurm, also loves Luisa, while Walter wants his son married off to his wealthy, widowed, niece, Duchess Federica, who has loved Rodolfo since their childhood together.

Under threats to her beloved father, Luisa is forced to accept Wurm and tell Rodolfo she does not love him. She and Miller have decided to flee when Rodolfo, who is being forced to marry Federica, appears to confront her. Rodolfo poisons a flagon of water and both drink from it before the truth comes out.

The opera might work, with sufficiently committed singing and conducting, but on opening night, it got these things only intermittently. Company Music Director Nicola Luisotti can usually be counted on to give his all, even without great material to work with, but at least for this performance, his conducting lacked its customary fire and flair. 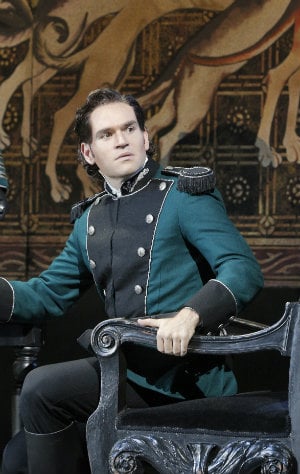 The star of the show was certainly the prodigiously talented tenor Michael Fabiano. Blessed with good looks, physical presence, and a pingy, well-projected tenor under great expressive control, Fabiano noticeably raised the temperature whenever he was on stage, and he delivered a splendid and intimate rendition of Rodolfo's “Quando le sere al placido” (“When in the evening calm”). His scene with the rich-toned mezzo Ekaterina Semenchuk, making a promising debut in the tiny role of Federica, packed some much-needed sizzle, despite its brevity.

But there was little chemistry where it was most needed, between Fabiano and Leah Crocetto, singing Luisa. The soprano has a sincere, but rather bland, stage presence, and didn't make sufficient dramatic distinction between Luisa's joy over Rodolfo and her desperation when Miller is threatened. She sang prettily (and displayed a fine trill) without ever imbuing Luisa's music with much drama.

Andrea Silvestrelli and his booming bass easily stole a few scenes as an oily and insinuating Wurm, looming physically over everyone else in the cast. Vitaliy Bilyy, also making his debut, made a warm Miller, bringing a firm, but not particularly distinguished, baritone to the role. Bass Daniel Sumegi, a late replacement as Count Walter, sounded wooly and worn. Adler Fellow Jacqueline Piccolino sang a lovely and sympathetic Laura, making a large impression in a small role.

All of this would have mattered less with good direction, but a weak showing by Laurie Feldman didn't help one bit. Fabiano, whose appearance in Lucrezia Borgia showed plenty of physical acting ability, was left frozen on stage in odd contortions far too often. Crocetto would obviously have benefited from more detailed direction, as there's plenty of drama to be milked from Luisa's situation. Sumegi and Bilyy drifted about the stage, their physical actions mostly cliches.

Neither did Francesca Zambello's sometimes-ludicrous, 15-year-old production do much for the drama. Michael Yeargan's semicircular Alpine diorama, the closest thing these days to an old-fashioned painted flat, looks decent enough and certainly isn't distracting, nor are the big paintings that fly in on a crane and provide most of the physical differences among the scenes. “[Leah Crocetto] sang prettily (and displayed a fine trill) without ever imbuing Luisa's music with much drama.”

But what should we make of the scythe- and pitchfork-wielding peasants, who somehow overcome musket-bearing soldiers in one scene? Why give a chorus of nobles riding crops when the only horse in sight is the ridiculous giant statue on which poor Federica makes her first entrance? And why have the opera's big secret acted out in the background while Wurm and Walter discuss a terrible crime they committed years before?

At the end of the performance, outgoing general manager David Gockley presented Zambello with the San Francisco Opera Medal. The director has certainly earned it, with a number of distinguished productions in her 30-plus years of working with the company, capped by the Ring production shared by S.F. Opera and Washington National Opera. Too bad, then, that the award came after a revival of this unfortunate production.