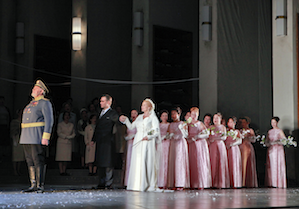 In the Shadows of the Stars, the superb Allie Light-Irving Sara's documentary about the San Francisco Opera Chorus, states the obvious truth: stars in the front, chorus in the back.

Except for Saturday night: In the new production of Wagner's Lohengrin, which opened in the War Memorial, there were great soloists, with Ian Robertson's Opera Chorus an equal partner every way, and Nicola Luisotti leading an orchestra on fire... all stars, nobody in the shadows.

Musically and vocally, it was as thrilling as opera can be. Let's delay talking about the production, and not spoil the good news.

In this "choral opera," it was a special joy to hear a performance rivaling Ragnar Bohlin's SFS Chorus the night before in the Prokofiev Ivan the Terrible score across the street at Davies Symphony Hall. How does a town of 800,000 manage to field two great choruses?! 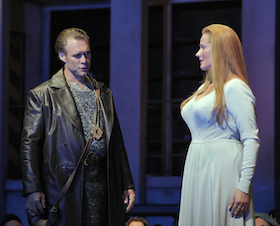 In happy decades of experience here, I have rarely heard the cavernous War Memorial sound as if were a small European house: Soloists, orchestra, and chorus filled the space in glorious stereo, with brass fanfares coming at you from everywhere, and music that was deep, broad, surrounding, and permeating the entire body.

After a wan, listless — rather than ethereal — Prelude, Luisotti pulled together a consistent, solid performance, with a lyrical and yet fervent sound, underscoring, supporting soloists, and producing the kind of surging, forward motion not heard too many times since his debut here with La Forza del Destino.

From a Walnut Creek La Tragédie de Carmen not all that long ago, wonderful Puccini performances in the War Memorial, and "elevated" by a daring general director to Siegmund in last year's San Francisco Ring, Brandon Jovanovich arrived in the title role fully formed. Between a lyrical, quiet opening and a similar finale, the tenor sang with power but always maintaining beauty of tone. 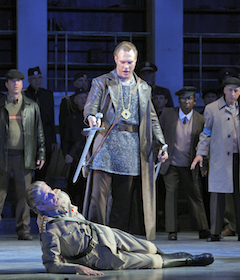 Camilla Nylund, making her local debut, looked and sounded the role, although a tougher, more assertive Elsa than usual. With two minor exceptions, her singing was both accurate and soaring.

It was good to have Kristinn Sigmundsson back in the War Memorial in prime form, as King Heinrich; Petra Lang's Ortrud and Gerd Grochowski's Telramund were convincingly evil, and vocally resplendent. Brian Mulligan's stentorian Herald is a big performance in a small role.

As for the production, it's based on some arrant nonsense about Lohengrin in Soviet era Hungary, but unless you read the program book, and try to figure out the reason for armbands and the hideously frumpy costumes of the women's chorus, you can just focus on the music.

In Hungary, you had the rebellious group wanting to cut ties to Russia, fighting those who had previously been supported by Stalin and Khrushchev. In our version, that is expressed by the battle between the group of Elsa’s rebels against the pro-Soviet group supporting Friedrich von Telramund. The essential military and political contexts of the Hungarian conflict and Lohengrin are invitingly similar.

I know something about the revolution, and find the "invitingly similar" context baseless and absurd; pure poppycock. The "revolutionaries" punching Telramund in the stomach as an expression of the clash which left hundreds dead, and displaced 200,000? Why not use Vietnam or Iraq or — best idea yet — place the action in ancient China where, at least, there was another hero who would not disclose his name? That may have more relevance to Lohengrin & Swan than Khrushchev versus 10th (or, worse, 20th) century Magyars. 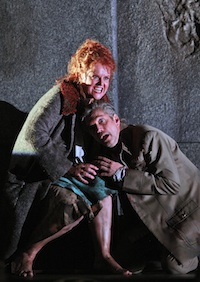 The best thing that can be said about Daniel Slater's "konzept" — apparently toned down considerably since previous stagings by co-producers Houston Grand Opera and Grand Théâtre de Genève — is that it can be mostly ignored and it doesn't interfere much with the singers.

Whatever Slater might have had in mind, little of it remains in the production. There are still some silly, unrelated missteps, such as Lohengrin's frequent handshaking rounds (often after wiping the sweat from his face), the Ken-and-Barbie visuals for the wedding night (greeted by laughter), Lohengrin paying more attention to folding his morning coat than the object of his undressing, and the use of clunky, pointless sets, without relevance to any time or place, rhyme or reason.

None of this matters. Thanks to the Messrs. Wagner, Luisotti, Robertson, Jovanovich, et al., this is the fall season's highlight. Prima la Musica, and bravi!