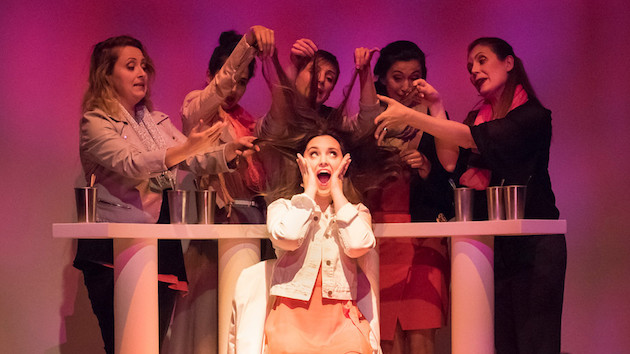 At SF Opera Lab’s production of Svadba-Wedding, the audience members, grouped into parties of four or five, sit at cream-colored tables scattered throughout the Veterans Building’s Taube Atrium Theater. After the show, there’s a champagne reception with cake and a DJ, to boot. But though the opera — by Montreal-based composer Ana Sokolović — dramatizes the ritual of marriage, it has little in common with the romances of operas past. Rather, it’s a highly stylized celebration of the sisterhood between bride-to-be Milica (Jacqueline Woodley) and her five friends (Liesbeth Devos, Laura Albino, Pauline Sikirdji, Andrea Ludwig, and Krisztina Szabó — all making their San Francisco Opera debuts). 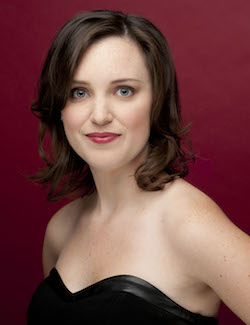 Staged by Michael Cavanagh, the opera’s action — primping, drinking, and games taking place the night before Milica’s wedding — moves across the theater’s platformed alcoves as well as a centralized stage. The singers constantly change formations and weave through the seated audience members, who have to turn their attention — and bodies — to a different area for each of the seven scenes.

Much of the one-hour show, sung a cappella with percussive effects produced by the singers, consists of intensely syllabic phrases that alternate with dense cluster chords. Sokolović derived the text (in Serbian, with English supertitles) from her research on hundreds of folk texts about marriage, but she has fragmented much of this material into repeating syllabic patterns interspersed with clucking and whoops. At times, the characters’ incessant chattering is tiresome: The succession of hand-clapping games, in particular, feels shallow. None of the characters develop personalities. More than anything else, they act as vessels for the presentation of text.

But the unique playfulness with which Sokolović writes redeems the show. Darkly glum text (“Alas, I am my mother’s only child ... she is giving me to Jovan, the drunkard”) becomes humorous when paired with the manically rhythmic stirring of cups. In one scene, half of the cast comically drops the register of their voices, in imitation of the boorish men who demand brides at any cost.

Here and elsewhere, Sokolović makes no real distinction between present day and past, or the stylized past of the folkloric texts. The effect is alternately disorienting and dreamlike, yet is always intriguing. And though much of the text is nonsensical, group dynamics — momentary tiffs, efforts to best each other in stunts — are unmistakably clear.

The flurry of activity occasionally calms. In the most visually stunning scene of the show, the women bathe themselves in a waterfall of silver fabric that descends from the ceiling. The text (“Wet your hair with stars / Wet your hands with stars”) is at its most sensual here, and Sokolović’s sound masses pulse evocatively. At the scene’s conclusion, the women walk in a slow procession, playing rainsticks in canon.

It is admittedly difficult to imagine this opera gaining much traction in the repertoire. Though the six singers — guided with expressive yet precise motions by conductor Dáirine Ní Mheadhra — sang with impressive accuracy, Sokolović’s cluster chords would achieve better definition with the addition of instrumental accompaniment. And the Serbian nonsense syllables, sung with wild rocking and jerking motions, introduce difficulties for the musicians that more commercially appealing small-scale operas — such as the recent River of Light at Festival Opera, or West Edge Opera’s As One — avoid. Svadba-Wedding won the Dora Mavor Moore Award for Outstanding New Musical/Opera, and subsequently went on tour in Canada and Europe. But the company that commissioned it — the Toronto-based Queen of Puddings Music Theatre — has since gone under.

That’s why it was so refreshing to see Svadba-Wedding programmed in the first season of SF Opera Lab. Particularly for patrons unenthused about the main company’s blockbuster-heavy 2016–17 season (complete with Madama Butterfly, for the fifth time this decade), the new space at the Veterans Building will be one to watch. 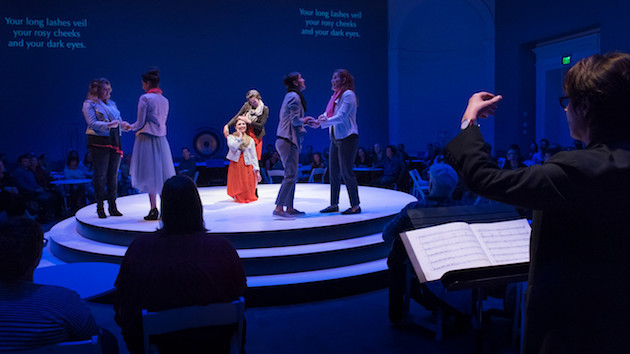