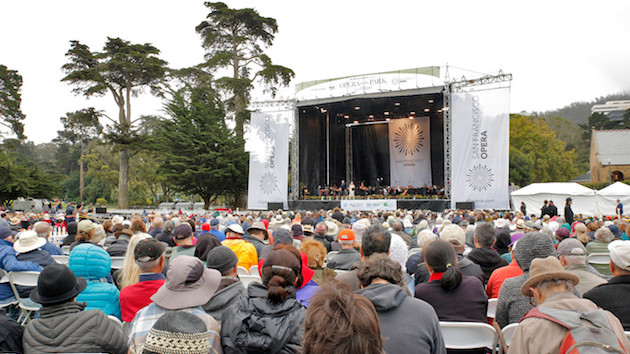 The star-studded Opera in the Park, San Francisco Opera’s wonderful, annual gift to all, returned to Sharon Meadow in Golden Gate Park for the 43rd consecutive year this past Sunday. First and foremost, thanks are due corporate, private, and city sponsorship; media sponsors that included SFCV; and the musicians who donated their services.

The cold and fog kept a lot of people away, and had others pulling out hats and scarves or huddling close to their dogs. (There were a lot of dogs, mostly adorable.) Meanwhile, the sound system, mimicking the acoustic recording process, emphasized baritone-range sounds, as well as the ring in voices, much to the detriment of some artists. Mezzos with strong vibratos in their midrange, i.e. J’Nai Bridges and Irene Roberts, who sound perfectly fine in the War Memorial Opera House, sometimes sounded unduly vibrato-laden and even blowsy through the loudspeakers. Similarly, a soprano with a remarkably pure voice, the marvelous Pureum Jo, was granted strong undertones that were not audible, even from Orchestra Row G, in the house. 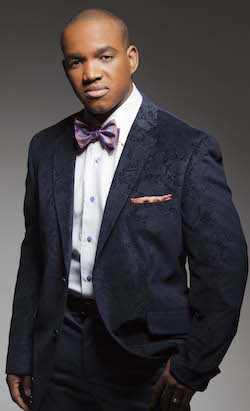 While those with ring and steel in their voices projected very well, the stronger that metal was, the more the sound system rang. That probably wasn’t an issue for people sitting far back. But for those closer to the stage, it was, at times, earsplitting.

Be that as it may, there were definitely standout performers. Tenor Lawrence Brownlee not only knocked all nine high Cs in Donizetti’s “Ah, mes amis!” (La Fille du Régiment) out of the proverbial ballpark, but held the last one to impossibly titillating length. Upon his return, in a final set dedicated to those who suffered pain and loss in the 9/11 massacre, he joined John Churchwell on piano for the finest, sweetest, and most beautiful rendition of “All Night, All Day” I ever expect to hear. Caressing some phrases in a quasi-falsetto half voice that fearlessly brought out his feminine side, Brownlee flawlessly swelled into masculine ringing tone, all in perfect keeping with the music. He provided the joy and spiritual heart of the concert.

Right behind him was the mellifluous baritone of Lucas Meachem. Perhaps a little too warm of voice for the final duet from Tchaikovsky’s Eugene Onegin (with soprano Julie Adams providing unbridled passion if not always pleasing tone), he sounded gorgeous in Robert’s aria from Tchaikovsky’s Iolanta, and simply marvelous in an idiomatic rendition of Lennon’s “Imagine.” Imagine Nicola Luisotti doing the most delicious pop pianist back-up and solo riffs imaginable, and several female artists dashing onstage to provide an amusing interjection. How many in the audience noted the irony of a concert that began with the National Anthem including a great song with the lines, “Imagine there are no countries / Nothing to kill or die for / And no religion too,” could not be determined at press time. 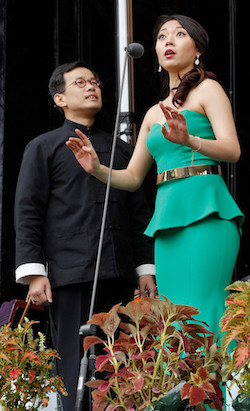 Two more standouts: George Gagnidze singing Giordano’s “Nemico della patria” (Andrea Chénier) even more magnificently than on opening night in the opera house, and the superb partnership of Pureum Jo and Yijie Shi reprising the love duet they had sung so beautifully the night before at the world premiere of Sheng’s Dream of the Red Chamber. True, Jo was handicapped by the sound system, but when she rose to her high note, the audience got a taste of the purity that makes her artistry so special. All three artists, as well as Brownlee and Meachem, have the mark of greatness upon them.

To summarize the rest: Maestro Luisotti’s penchant for slow tempos made for a dull “Largo al factotum” (Il Barbiere di Siviglia) that wasn’t helped by David Pershall’s low personality quotient. Similarly, Luisotti stole virtually all bounce from Pene Pati’s “La donna è mobile” (Rigoletto), which was saved only by his high C. Finally, a soprano such as Anna Pirozzi would be wise to refrain from singing “La mamma morta” (Andrea Chénier) slowly unless she 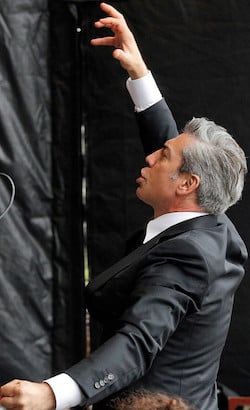 has the strong low notes and midrange, as well as the heart-rending interpretation of a Callas, Muzio, or Tebaldi. A strong, steely top does not, in and of itself, a great soprano make.

Irene Roberts looked like she was freezing through Berlioz’s “D’amour l’ardente flame” (La Damnation de Faust). Possibly wishing for some flame behind her, she suffered intonation lapses in the beginning, and balanced some possibly sound system-induced shrill tone with beautiful soft notes and a glorious top. Similarly, Bridges’ high climax to Gounod’s “O ma lyre immortelle” (Sapho), also sung too slowly for such a chilly climate, vied with the richness of her tones to cancel out some possibly sound system-induced shrillness. Given climactic and sonic issues, it was due to artistry alone that the two orchestral pieces – the orchestral version of the choral conclusion to Act I of Copland’s The Tender Land, and ‘Nimrod’ from Elgar’s Enigma Variations – came off as well as they did.

Before the traditional finale, a rousing “Libiamo” sung by soloists and chorus alike, Bridges sang a strong and idiomatic rendition of “He’s Got the Whole World in His Hands” where the two extremes of her range stood out. I wish she was able to sing on high without making mincemeat of her diction, but there are few Frank Sinatras amongst opera singers. Pati was winning in “Somewhere Over the Rainbow.” Given that it’s in his high range that he excels, his high interpolated notes were as delightful as his warmth. Bernstein’s “Somewhere” (West Side Story) sat too low for his wife, Amina Edris, who stood in for Heidi Stober, but its high ending, as well as her brief solo in “Libiamo,” showed her in good form.

Opera in the Park is a treasure. May the tradition continue. And may the sun shine upon us all. 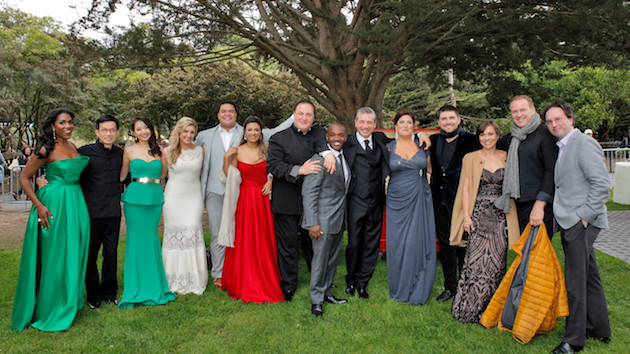