When an opera is as brilliant as Mozart and librettist Lorenzo Da Ponte’s Le Nozze di Figaro, and everything onstage and in the pit clicks, the results can be magical. Such is the case with one of the most animated and delightful productions of the masterpiece that I have ever seen. 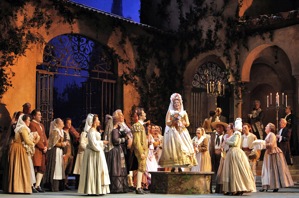 If, on opening night, the golden impact of San Francisco Opera’s production is greater than the sum of its parts, each of those parts is a considerable achievement in its own right. First and foremost was the winning partnership of veteran stage director John Copley and SFO’s equally brilliant Music Director Nicola Luisotti. In their hands, dramatic action and vocal accents were as compelling as the orchestra’s snappy introduction.

This Figaro is a case of one hilarious scene after another, illuminated by Mozart’s incomparably inventive, gorgeous music. Everything moves along, as though arias were written, not as stand-alone set pieces to be admired in and of themselves, but rather as vital contributors to a nonstop romp.

Director Copley — who in honor of his 30th engagement with the company, received the highest honor the company bestows, the San Francisco Opera Medal, from General Director David Gockley at the conclusion of the performance — never let attention lag. Every opportunity for movement, expression, and laughter was exploited to the full. With not a single coarse or overdone move, the opera seemed as fresh as it undoubtedly did at its 1786 Viennese premiere.

Luisotti, who flowed between conducting and equally inventive fortepiano continuo, chose to punctuate his in general rapidly paced arias with some unusual lengthening between phrases. Not only did this add air, breadth, and depth to the music, but it also created a certain “wow” factor for those familiar with the work. While there were two arias, the Countess’ “Porgi amor” and Cherubino’s “Voi che sapete,” that would have impacted more with slower tempos, Luisotti’s approach amounted to a rediscovery. 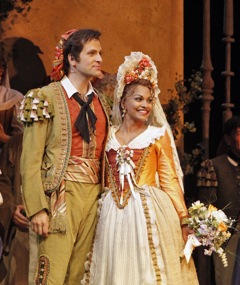 Whenever they were onstage, debut soprano Danielle de Niese (Susanna) and bass-baritone Luca Pisaroni (Figaro) were outstanding. De Niese’s voice is not large, but the sound is lovely, with a perfectly pointed leading edge that propelled her brilliantly accented performance over the footlights. Every phrase was alive with meaning. While some sopranos and conductors treat Susannah’s Act 4 recitative and aria, “Giunse alfin il momento … Deh vieni non tardar” as a precious little jewel to be caressed with loving care, de Niese and Luisotti turned it into an irresistibly sly scena of duplicitous seduction. De Niese’s marvelous performance at Opera in the Park only hinted at her accomplishments on opening night.

Pisaroni, whose vocal beauty and volume perfectly complements de Niese’s, was a riot. As physically nimble as his partner, he copiously inflected phrases without once disrupting the flow of the vocal line. Where some artists declaim by minimizing or stopping vibrato, Pisaroni’s bel canto technique sang its way through every underscored word and exclamation point. Marvelous.

Other standouts were San Francisco’s beloved character actor mezzo, Catherine Cook (Marcellina), veteran bass baritone John Del Carlo (Dr. Bartolo), and tenor Greg Fedderly (Don Basilio). Every time Cook appears in a comedic role, I rub my hands, wondering how long it will take before I burst into laughter. The woman is a prize.

Baritone Lucas Meachem (Count Almaviva) has a gorgeous voice, but the part lies too low for him. Only in the higher reaches, when you could almost hear him rejoicing that he could finally sing out, did he truly shine. Nor did his growling anger, which expressed emotion at the expense of vocal plushness, or his acting, which mostly succeeded in portrayal the Count as a dunce, totally convince. 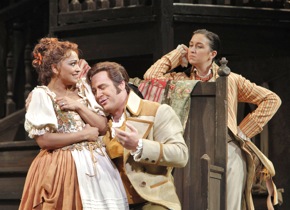 To her credit, debut soprano Ellie Dehn (Countess Almaviva) presented a poised portrayal that ably reflected her character’s status. She also achieved estimable gravitas in her great aria, “Dove sono,” whose emotional import and occasional embellishments were exceptional even if the sole important trill was negligible. Yet despite the beauty of the voice, Dehn’s tendency to cut vibrato on crucial high passages led to a disappointing opening “Porgi amor,” and a feeling that she would probably sing better once her debut was behind her.

Debut mezzo Michèle Losier (Cherubino) has an exceptionally rich instrument, but she was sharping like crazy in “Voi, che sapete.” Worse, she shortchanged some notes, so that a rapid phrase such as C-D-E came across as C-sharp(-almost E-E). Nor was her face as animated as one might wish. Again, this was probably a case of opening night nerves, because she improved considerably as the evening progressed. Debut soprano Sara Gartland (Barbarina) presented a bright, pert portrayal worthy of an Adler Fellow, bass baritone Bojan Knezevic (Antonio) a suitable drunkard, and tenor Robert MacNeil (Don Curzio) more than adequate.

Regardless, the production was so effervescent that one could only bless the ground that Mozart and Da Ponte walked on. With Luisotti’s conducting insuring that the final, perfectly blended ensemble underscored that forgiveness and love are what’s ultimately important, the performance was a triumph. By all means go, either for the current cast (through Oct. 5), or to the three final performances with a different and equally handsome debut Figaro (Kostas Smoriginas), and a promising Susanna, Count, and Bartolo.