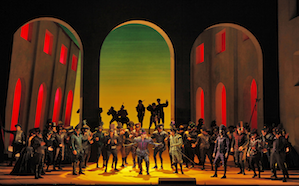 In all but the most important ways, it was a traditional opening night at the opera. The well-heeled crowd, lubricated by pre-performance dinner and libations, let the world know that Verdi’s Rigoletto would begin in the War Memorial Opera House when they were ready. Pre-performance acknowledgments of the frighteningly small group of invaluable families that continue to fund productions weren’t too long, and the Star Spangled Banner, briskly conducted by Music Director Nicola Luisotti, had almost everyone on their feet. But when the curtain opened, in place of new designer gowns came Michael Yeargan’s 15-year-old, fourth-run production; Harry Silverstein’s dismayingly unimaginative block staging; almost-there singing that ran the gamut from inspired to dispirited; and oft-thrilling conducting that rarely succeeded in lighting fire in the principals’ bellies.

How the alternating cast fares — not really a “second cast” in that its three mostly different principals appear, on average, as many times as those on opening night — will be discussed in another day in the Comments section, below. But the first night assemblage, which included three much-heralded SFO debutants, fared best in secondary roles. 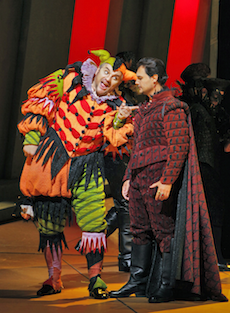 As the central character, Rigoletto — the oft-despicable hunchback jester with a heart —baritone Željko Lučić displayed a monochromatic voice that sounded somewhat crude on the bottom, possessed appreciable beauty in the middle, and failed to sufficiently swell and maintain its cutting edge at the top. In his great Act 2 aria, “Cortigiani, vil razza dannata,” for example, he simply could not match Luisotti’s passion. Worse, the otherwise respectful Luisotti, who bent over backwards to support his singers, had no choice but to ride over Lučić in Verdi’s crucial scene-capping climaxes. Just when you wanted to feel the punch, and the extra tug in your heart, you felt let down. Nor did it help that this hunchback’s posture kept improving as he went through his paces.

In his SFO debut as the Duke of Mantua, the huskily attractive, still-young tenor Francesco Demuro at times sounded as if he had confused Verdi with Donizetti. His opening aria, “Questa o quella,” was lightly and sweetly voiced — a bit like the great Tito Schipa — but with a fluttery top that lacked Schipa’s focus, freedom, and elegance, and sometimes bordered on the bleating. Worse, his Act 3 big hit, “La donna è mobile,” lacked lift and insouciance. Without a score, I don’t know if Verdi wrote in the high B ending, but everyone who knows the opera expects it, and it wasn’t there. There is great promise here, but it remains as yet unfulfilled.

In her SFO debut as Rigoletto’s daughter, Gilda — the young woman who sacrifices her life for a cad — soprano Aleksandra Kurzak was the picture of fetching innocence and vulnerability. Her voice is especially lovely when singing softly, and her trill is sound, but her simplification of the coloratura at the end of her great Act 1 scene stealer, “Caro nome,” and the choice to descend rather than hit a D-flat at the end of the beloved Act 3 quartet, “Bella figlia dell’amore”, were signs that her technique cannot stand with the best.

The rendition of the aforementioned quartet, in which the three principals were joined by mezzo-soprano Kendall Gladen’s fetching Maddalena, was evidence of all that was wrong with the production. Either by Luisotti’s choice, or due to a lack of imagination on Demuro’s part, the tenor introduction lacked poetry, and the quartet proceeded in metronomic fashion. Yet another pretty tune in an astounding progression of pretty tunes, yes. An ensemble that touched the heart, or that was so fabulously sung that the audience was on its feet, demanding an encore, no. 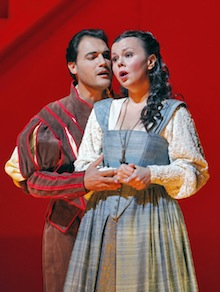 In his SFO debut, bass Robert Pomakov excelled as Monterone. His voice, stronger and more colorful than Lučić’, calls for a return in larger roles. The same can be said for the wonderful bass Andrea Silvestrelli, whose hulking Sparafucile was as evil and arrestingly powerful as his last season Hagen in Wagner’s Ring. Bravo!

Director Silverstein missed the mark. Given a La Scala-type set whose V-shaped, raked layout tended to dictate staging, he seems to have assumed that the leads could hold their own and animate the proceedings while everyone else pretty much stood stock still. They couldn’t, and the production fell flat. I’m not calling for the egregious excesses of Regietheater, but its animation was desperately wanting. Nor did mostly unconvincing interactions between chorus members, as usually singing beautifully under the direction of Ian Robertson, help matters. Costume designer Constance Hoffmann’s beautiful and imaginatively varied get-ups were a highlight, but they weren’t enough.

Those who wonder why the audience for opera is graying, and its numbers declining, need only look at this production, whose opening night could not begin to touch the visceral excitement and emotional involvement of the competing ball game. We can only hope that the rest of the season will make a better case for art.