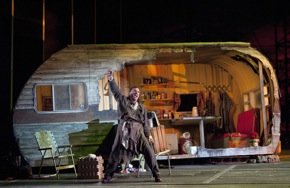 Mortal love is about to blossom in Siegfried, though you’d never know it from director Francesca Zambello’s vision of Planet Earth. From the desolation that dominates her San Francisco Opera coproduction of the third of the four operas in Wagner’s Ring Cycle (Der Ring des Nibelungen), you’d think the end of the world had already come. On Michael Yeargan’s opening set, Siegfried and Mime’s home looks like the post-holocaust ruins of a trailer park, while Jan Hartley and S. Katy Tucker’s projections during the orchestral interludes are choked with the refuse of humankind’s destruction of the natural world. If Zambello’s vision is so stark as to make Wagner’s apocalyptic Twilight of the Gods (Götterdämmerung) seem like an afterthought, the overwhelming impact of Wagner’s music nevertheless makes us eager to return for more.

Siegfried’s grimness is not merely physical. Young Siegfried hates Mime, the despicable dwarf who has raised him in hopes of eventually seizing the ring. Mime, in turn, despises his brother Alberich, who stole the ring from the Rhinemaidens many, many hours ago in the first of the four Ring operas, Das Rheingold. The giant Fafner, here disguised as a monstrous trash compactor, is dedicated to annihilating anyone who may want to steal the ring. And the God Wotan, well on his way to ruin, seems equally down in the mud in his sometimes brutal interaction with the wise-in-all-things-except-men Earth Goddess, Erda. Wagner conveys all this with unflinching directness and brutal force.

Thank Goddess for the Women 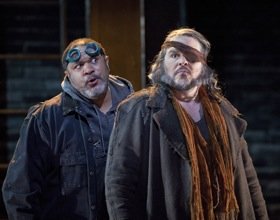 esides the longed-for heroic glint in Siegfried’s voice (tenor Jay Hunter Morris), as well as the glories of the orchestra under SFO’s former music director Donald Runnicles, the only light in Mark McCullough’s masterfully lit Siegfried came from costume designer Catherine Zuber’s scarf for the departed Sieglinde and two female leads: the Forest Bird (debut soprano Stacey Tappan) and the former Goddess, Brünnhilde (soprano Nina Stemme). Both were extraordinary. Tappan sang clearly, with great beauty and carrying power, and moved with a restrained, birdlike lightness and curiosity. Everything about her was a joy.

Stemme sounded marvelous, being in even better form than when she debuted as Brünnhilde in SFO’s Walküre last June (while suffering from a sinus infection). Possessing the biggest voice onstage, she easily negotiated her character’s huge range. She also summoned forth multiple colors to make believable her character’s wide range of human emotions. With Flagstad, Nilsson, and Varnay no longer with us, we Wagnerites can rejoice that we have another great Brünnhilde to maintain the tradition. Stemme did cut her final high climax short, but that seemed out of respect for Morris, the tenor, who was especially overpowered as she rose higher in her range. 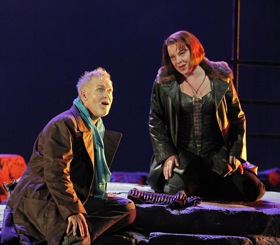 Making his debut in the role he initially expected to cover for Ian Storey, Morris has made no secret of the fact that he first sang Siegfried through from beginning to end about a week before the performance. Although he paced himself well in this ultimate test for heldentenor (heroic tenor), his instrument rarely rang out. The bottom was shallow, the lower middle range a bit gravelly, and the lovely top clear but less than imposing. The thrill was absent.

Yet his youthful physical buoyancy, near-heroic posture, and convincing naivete amid brutality (how American!) were a delight. Perhaps by the time he essays the role a second time on June 17, in the first of SFO’s three complete traversals of the Ring, he will have found the means to forge his sword with the power of a hero.

In particular, he came up short when sharing the stage with the sensational Mime of tenor David Cangelosi, whose cutting, intentionally niggling instrument was far more compelling. Cangelosi's acrobatic physicality dwarfed Morris’. When your hideous dwarf is turning cartwheels and dancing up a storm while your strangely gray-bearded “youth” is having trouble being heard, you’ve got a problem.

Also making her SFO debut, mezzo-soprano Ronnita Miller, as Erda, displayed a rich voice that grew stronger as the opera progressed. Although she did not fully produce the weighty midrange that conveys ultimate Earth Goddess wisdom and profundity, she gave signs that the means are within her.

Far from playing a supportive role, Wagner’s orchestra is an essential component of his message. In the War Memorial Opera House, where it can sing out with far more power than in the covered pit of Wagner’s Bayreuth, the San Francisco Opera Orchestra sounded superb. Runnicles may not be the most rapturous of conductors. Yet when he went for the gold in the final act, and unleashed the orchestra to convey the full glories of Wagner’s mature, post-Tristan und Isolde writing, the results were irresistible. Morris may have suffered as a result, but we in the audience were the winners.

Despite falling short of the ideal, San Francisco Opera’s Siegfried delivers a powerful experience. With much glorious playing from the orchestra, plus a Brünnhilde and a Mime that rank with the best, it remained gripping throughout its nearly five-hour length. Now we shall see how it stands in the context of June’s total Ring.