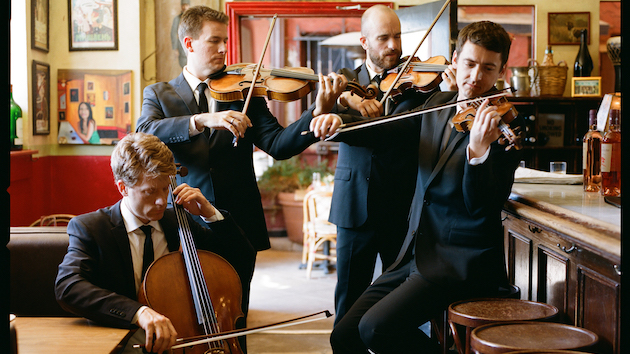 Comparing any living composer to Beethoven practically begs for outraged comments, but I’m willing to take that chance for Thomas Adès. The British composer’s two quartets, separated by 16 years, offer wildly different experiences; both were perfectly at home with Beethoven’s second “Razumovsky” Quartet on the Calder Quartet’s April 12 program. Indeed, if these three works still have any disbelievers, I hope they were at Herbst on Wednesday to hear the ensemble — Benjamin Jacobson and Andrew Bulbrook, violins; Jonathan Moerschel, viola; and Eric Byers, cello — convincingly argue for their union. 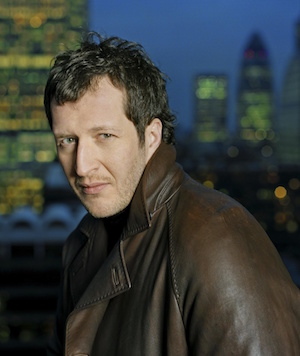 Formally, in fact, Adès’s Arcadiana recalls Beethoven; like the monumental Op. 131, this 1994 quartet consists of seven movements played without pause. In place of larger structure, however, Adès writes independent miniatures that inhabit fantastical worlds. They’re as virtuosic compositionally as they are in performance; allusions (to Schubert and Greek myth, for example) litter the score, so that scuttling dissonant lines cadence in a quote from the aria of the Queen of the Night.

Two movements stood out among the rest. The violins’ lugubrious slides and cellist Byers’s scraped rhythms in “Et...(tango mortale)” were perfectly grotesque, yet never caricatured. “L’embarquement” sounds like Impressionism taking Hollywood: wearing mutes, the players trade expressive melodic lines. The writing doesn’t lie well; it’s in the high register and, in a sea of accidentals, the performers are lucky to play an occasional open string — but you’d never guess it from Wednesday’s lighthearted performance. Really, this was true of the whole evening: Adès’s quartets are, on the continuum of contemporary chamber works, fairly difficult. Yet it all looked easy and fun.

The Four Quarters, from 2010, has the same running time as Arcadiana, but, in four related movements, it’s a more focused work. The second movement, “Morning Dew,” feels the most classical: Adès calls it a serenade, but its bumbling pizzicato lines recall the scherzo form. As the notes climb, the rhythms unexpectedly lurch forward, as if Adès skips beats — moments that Calder humorously played up. The pure chords in the meditative first movement, “Nightfalls,” were exquisitely tuned. In “Days,” the third movement, the rhythmically complicated melodic lines sounded natural.

Because these movements feature similar material, expressive melodies punctuated by ostinato rhythms, the final movement feels all the more unique. “The Twenty-Fifth Hour” seems to live outside of time, but in fact, Adès writes in the unusual meter of 25/16, which he subdivides in varying and complex ways. Again, the audience wouldn’t know it: Calder’s smoothly phrased harmonics sparkled against graceful, plucked chords.

Any group can get away with reading the opening movements of the other Razumovsky quartets, but the E Minor is a strange beast, full of strong starts and unexpected stops. Calder emphasized the unsettling nature of the first movement. He played the opening chords with Eroica-like speed, rather than the more conventional romanticism, letting the tentative legato phrases trail off. The forward-moving 16th notes sometimes felt dangerous, but allowed for regal spreading in the triumphant closing theme.

I love the lush and slow old recordings of the Molto adagio, but Calder’s flowing performance had a new appeal. Though they felt somewhat pedestrian later in the movement, uncommonly active accompanying rhythms made the initial long-breathed melodies sing. Conservative bow usage and, occasionally, nonvibrato imbued thick textures with clarity. Like an anticipatory pedal point in an organ fugue, but transported to suspenseful forte chords, the nonvibrato texture was particularly effective in the central cadence.

The Allegretto movement’s Russian theme was, delightfully, never allowed to become expansive, and though the bounced strokes occasionally pulled at the seams of the raucous Presto, the expressive tempi were dramatically effective. The audience loved it, as well as the contemporary romanticism of Andrew Norman’s Sabina, a meditation on morning light.