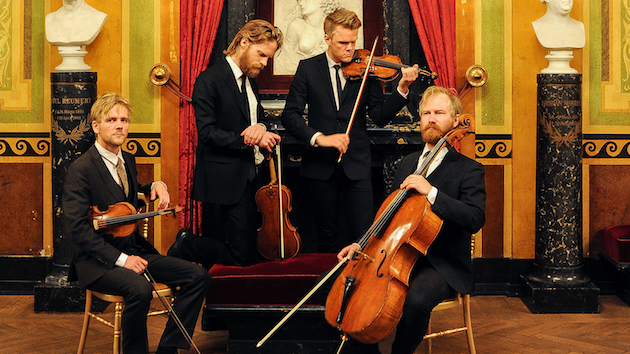 It’s a cliché to attribute the strength of their ensemble to friendship, but indeed, listening to the Danish String Quartet play the beginning of Bartók’s First Quartet, it’s not hard to remember that the upper three voices have played together since they were children.

Usually, these contrapuntal lines, first shared by the violins, sound at best like a really good duo. On Monday, the two violins (Frederik Øland and Rune Tonsgaard Sørensen, switching off on first) sounded like one person — and the same was true of the whole quartet (violist Asbjørn Nørgaard, cellist Fredrik Schøyen Sjölin) in the unruly unisons later in the work.

There was nothing outgoing about this Bartók, which opened the group’s debut for San Francisco Performances, at Herbst. (Established in 2002, they’ve won many accolades internationally and played in the Bay Area before, but this was their first time in San Francisco proper.) Rather, it was an inward-looking performance, one that tended toward the ponderous. Bartók wrote the work, in part, to commemorate his unrequited love for Stefi Geyer, who never played the violin concerto he wrote expressly for her. He called the first movement a funeral dirge.

It was all aching, dead love. Even in the passages that lend themselves to raucousness — the forte open strings and accented pizzicato — the quartet never played a sound that was less than beautiful. It had a kind of Viennese elegance: everything was prettily vibrated and smooth. A hint of wildness crept into the last movement, but even so, the repeated eighth notes were never altogether active, the open Es like a magnificent legato study.

The players tossed off the last movement’s thorny little fugue with leisure, never seeming to exert themselves over the course of the substantial work. In fact, the performance was so immaculately presented — the music simply existing inside of them to be unveiled, like a Michelangelo sculpture — that I felt physically tense, holding myself rigid lest the moment be spoiled. A little more dynamism might be in order, but still, it’s a testimony to the quartet’s scrupulousness in presenting their point of view that I now realize that most recordings I know fail to exploit these romantic aspects much at all.

And then again, with Beethoven’s “Razumovsky” Quartet No. 1: the slow movement, played with especial solemnity, had never reminded me so much of the funeral march of the Eroica Symphony. The major-key sections, then, were made even sweeter, the dominant chords (second violinist Øland high on the A-string) that brought us there unforgettably transformative.

Beethoven’s rhythms rarely play themselves, but the triplets felt especially labored at this tempo; the instruction “beklemmt,” or oppressed, doesn’t appear until the Op. 130 quartet, but it may as well. Might this be a viable new approach? It is marked Adagio molto — and mesto, “gloomy.”

The Allegretto, on the other hand, easily plays itself; but thankfully, the group’s interpretation didn’t end with Beethoven’s markings. Their refinement was a boon in the interlocking rhythms and marathon lines of climbing notes, and the unison passages brought the wildness and power that I sometimes missed in the Bartók. It was also a markedly theatrical performance. The outer movements were alive, the elegant and energetic again mixing, with slight yet potent rubato, to wonderful effect.

In the first half of the program the quartet played a set of Scandinavian folk tunes. I would have rather had the marked repeats in the Beethoven, but these tunes made good dessert for those who wanted it. The encore was an unsophisticated and lovely Nielsen chorale.