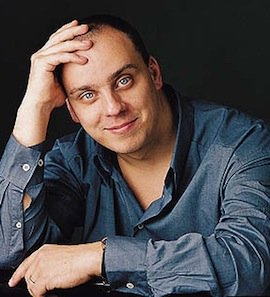 Oh, how I wish I could have taken you by the hand to Herbst Theatre on Monday night. There you could have joined us as we sat in stunned silence at the end of baritone Matthias Goerne and pianist Leif Ove Andsnes’ rendition of Gustav Mahler’s “Urlicht.” The last song in the first half of a recital that cleverly grouped into thematic progression six of the 11 songs of Shostakovich’s Suite on Verses of Michelangelo, Op. 145, with selected lieder from Mahler’s Des Knaben Wunderhorn, Rückert Lieder, and Kindertotenlieder, the “Urlicht” cast an angelic light on a journey that led us from the fresh scent of love to the realities of suffering and death.

“Urlicht,” familiar to Mahler lovers as the alto/mezzo-soprano solo in the fourth movement of his Second Symphony, introduces a seeker who, overcome with humanity’s great need and pain, prays for blissful release into everlasting life. To 10 short lines of verse, its music is less of a traditional song, in the Schubertian sense of a clear melodic progression, than the embodiment of a journey from burdened awareness to transcendence. As such, it calls for supreme interpreters who can convey all the suffering and hope of humanity, and, in the song’s final arch, embrace ultimate and welcome release.

Starting with utmost stillness, at a very slow tempo, Goerne and Andsnes invoked the red rose. The honeyed sweetness in the baritone’s voice, and the rapture in Andsnes’ touch on the keys — fully conveyed by hearts, voice, and piano lid wide open — bespoke a longing for communion with the source of all things material and metaphysical. 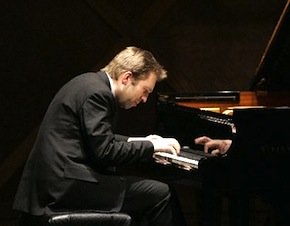 There are many ways to end the first section of this song, but Andsnes and Goerne’s absolute silence signaled that a spiritual journey had commenced. Tempo increased at the encounter with the angel who would block the way, with the sound and feel of Goerne’s voice transitioning from soft and sensitive to emphatically male. “Ach nein! … Oh no! I would not be dismissed! I am from God and would go back to God!”

Then came the wondrous, arched phrase: “Dear God … give me a light … to blissful everlasting life!” Here, singer and accompanist sang as one. Taking their time, and Goerne multiple breaths, the two artists created a musical arch that served as bridge from this world to the next. The effect was breathtaking, Andsnes’ long-considered, final note floating and lingering in space moments after its sound had ended. It was as if the two had created a holy passageway to the heavens, and swept us along with them.

If I spend so much time on one song, it is to give a sense of the wonders wrought by this rare artistic partnership. When, at the end of each set, Goerne turned to Andsnes, embraced him with hand on shoulder, and gave him a glowing smile of appreciation as they walked offstage, I could feel the gratitude of a magnificent singer acknowledging that his collaborator’s equally visionary powers and utmost control of color and balance had made this musical miracle possible.

Although Matthias Goerne is a very different and far less fussy artist than Dietrich Fischer-Dieskau (the fabled baritone who helped teach him how to communicate with an audience), he shares with his predecessor the ability to transition from the most honeyed and touching of tones to sounds far more brutal and emphatic. Goerne uses his huge expressive and dynamic range, which conveys both the yin (soft, feminine) and yang (hard, masculine) elements of the human personality, without even a hint of self-consciousness. This sense of an artist who sings directly from the core of his being, born of a willingness to fearlessly explore the deepest reaches of the heart, communicates emotions with a sincerity that illumines the soul’s greatest joys and longings.

Soon after Goerne and Andsnes delivered Mahler’s “Ich bin der Welt abhanden gekommen” (I am lost to the world) very slowly, with Goerne’s rapt and exquisite high notes matched by the solitude of Andsnes’ sounds, came the final suite of songs. Here, all romantic treatment of suffering and anguish were swept aside, as two of Mahler’s most militaristic songs — “Revelge” (Reveille) and “Der Tambourg’sell” (The drummer boy) — framed Shostakovich’s “Death.”

Singer and accompanist sang as one, creating a musical arch that served as bridge from this world to the next.

In ways impossible to hear on either CD or YouTube, Goerne opened his voice and being to the utmost, delivering huge, soldiery proclamations that bespoke the gritty realities of war and death. As the soldiers sang “Tralali, tralaley” as they passed before the sweetheart’s house for the final time, Andsnes and Goerne madw the inescapable the sounds of a final death chant.

As if that was not chilling enough, Goerne virtually cried out in “Der Tambourg’sell” with utmost musically as the poor drummer boy marched to the gallows and took his leave. Andsnes, having enlisted the Bay Area’s finest page-turner (and former San Francisco Symphony Chorus member), Aron Bateleur, to rest her hands on the piano’s bass strings at the start and the conclusion of the song to render the drumbeat hollow, sounded the final hushed “Good-night” as the noose was fastened.

To an audience on its feet, the two men returned to the stage at the end of their generous program to deliver an ideal encore, Beethoven’s long “An die Hoffnung” (To hope). With this beautiful affirmation that transcendence is possible, if not in this life then in the beyond, the great artists took their leave.