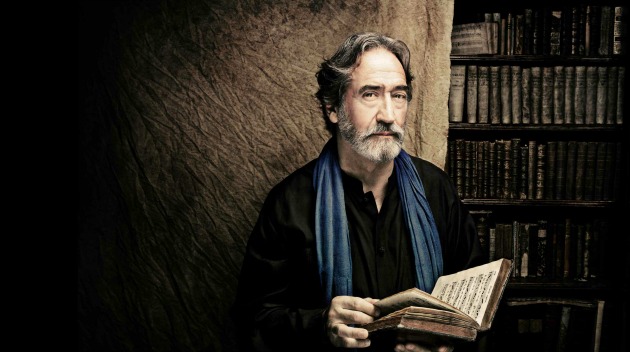 If there were no Jordi Savall, we’d all live on a musically smaller planet. In a career spanning more than half a century, the Catalan viol player and conductor has leveraged his expertise and finesse with early music to unearth often abandoned riches from Versailles to Venice, Istanbul to Japan, back and forth across the Iberian Peninsula, and beyond.

On Thursday, May 3, Savall and the Galician bagpiper Carlos Núñez assembled a team of expert supporting players to explore the “Celtic Universe” at the Herbst Theatre. Presented as San Francisco Performances’ 2017-18 season-ender, this exuberant and affecting evening of music from medieval to modern offered a characteristically Savallian sweep. Along with plenty of Irish tunes, there were selections from Scotland and Brittany, Galicia and the Basque regions.

Grins broke out and bloomed on the faces of players and listeners alike. Feet tapped and stamped. There were clap-along encores and occasional hoots of delight from the irrepressible Núñez. And here and there — Scottish composer Niel Gow’s “Lament for the Death of His Second Wife;” the eerily chromatic “Aurtxo txikia negarrez,” a Basque lullaby that seemed as likely to loft a child into richly haunted dreams as soothe her — the mood ventured into mordant, moonlit depths.

Joy, in these whirlingly melodic and often strophic selections, prevailed above all. The infectious dance-driven character of the reels and jigs and beguiling airs were the fount. It was the way the music poured forth, in the ensemble’s nimble and caressing timbres, that made the music-making so seductive. Without the suppleness and artistry of the performances, the ear might have tired through well over two hours. That never happened. 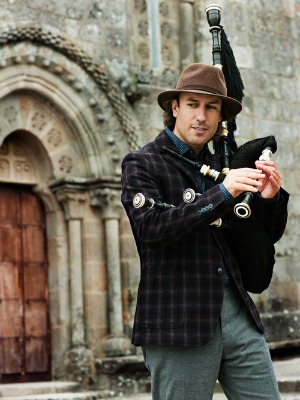 Positioned on one side of the stage, Savall set his sensitively bowed treble and bass viols into an ongoing conversation with Núñez on his assortment of pastoral pipes and whistles (with an occasional urgent outburst from his bagpipe) on the far side. Andrew Lawrence-King was a wonder of delicacy on the Irish harp and psalterium, an auto harp-like stringed instrument that nestled comfortably in his lap. He made the most of his lightly accompanied solo set, which included a brief tour-de-force of simultaneous right- and left-hand variations in the 17th-century “Ane Groundel.”

Frank McGuire added an important contribution on the bodhrán, the open-ended Irish frame drum that allows the player to vary both tone and melody. McGuire made it speak in an eloquent and elaborate rhythmic grammar. Xurxo Núñez, the bagpiper’s brother, struck and stroked his drums with a heavily padded mallet and long brushes, chipping in now and then with gently brandished tambourins and clacking castanets. Pancho Álarez completed the ensemble, on the viola caipira, a Brazilian Baroque guitar.

The evening opened in dramatic fashion, with Núñez striding down the aisle from the back of the house and squeezing out a virtuoso bagpipe air. Sections of numbers played without pause explored different regions and themes, with such titles as “The Caledonia Set,” “Celtic Universe in Galicia,” “Flowers of Edinburgh,” and “Irish Landscapes.”

There was some instructive conversation along the way as well. When it came to “The Lord Moira Set,” Savall explained the “bagpipe tuning” of his bass viol; sure enough, under his bow, the instrument took on a different and slightly occluded voice, by turns guttural and keening. Lawrence-King, who also undertook a fair amount of tuning on both his steel-stringed instruments, recited a poem at one point.

For all the ostensible simplicity and repetition, the music migrated from the Baroque-like calm and figured ornaments of Savall’s variations to jittery medieval hockets and the frank folk sentimentality of “The Hills of Ireland,” “The Morning Dew,” “Apples in Winter,” and “The Rocky Road to Dublin.” There must have been some Irish folk in the audience whose homesickness was either salved or quickened by those tunes and others.

Núñez was a standout on his assorted pipes, which both sparkled with his rapid fingerwork and seemed to sigh, exclaim, and pine in his long, seemingly single-breath phrases. He was also the most overt cheerleader, marking rhythms with his active feet and nearly breaking into dance a few times.

An improvisatory looseness came through, in all the players, a sense of the music’s propulsive order freeing them to feed off each other’s energies and highly polished skills. The only thing missing was a pint of something foamy to drink and a talkative bartender telling his tales. But even without a glass in hand, the Herbst was the Celtic bar of choice for the night.