In recent years, the Armenian pianist Nareh Arghamanyan has been quietly building an international reputation. After winning the Montreal International Music Competition in 2008 at the age of 19, she has been steadily performing throughout Europe and in North America.

I first heard her recital in Santa Rosa in September 2009, and well recall the wide gamut of colors she produced and the sense of intimacy she created. So I attended her recital on Sunday, part of San Francisco Performances’ “Young Masters Series” at the S.F. Conservatory of Music, with much anticipation. 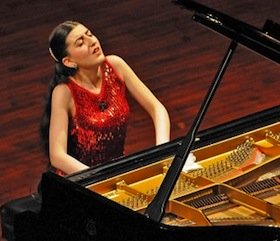 The artist opened the program with Muzio Clementi’s Sonata in F-sharp Minor, Op. 25, No. 5, a seldom-heard work by one who often was dismissed as a second-class composer of a number of sonatinas that torture all young pianists (and their teachers). Clementi, though, was greatly admired by Beethoven and had an undeniable influence on him. As if to prove that point, Arghamanyan gave the sonata a clear and meticulous treatment, accompanied by her signature intimate soundscape while also laying on a richness of tone that Beethoven clearly tried to imitate.

She also performed Schubert’s Four Impromptus, Op. 90, treating them with some surprises. For example, in the No. 2 Impromptu in E-flat major, the long, descending scales with twirling, ascending trills were performed almost staccato, with a phenomenal level of clarity rarely heard when the piece is performed. It was nevertheless lighthearted, and sounded as if the piano were giggling from being tickled. The middle part, in B-minor, was at times brutal, creating a dramatic contrast with the former.

By that point in the program, the experience of listening to Arghamanyan two and a half years ago had come back to me vividly. Her extraordinary artistry lies in her ability to speak very, very softly, almost implying the notes rather than actually playing them, though with utter conviction, firmly grounded. Imagine a seascape at dusk, with the tide receding. As the light in the sky dims, the rock formations that were underwater are revealed gradually under the soft light of dusk. It’s that subtle, and that beautiful.

Delicate Touch, Then a Storm

Following intermission, Arghamanyan took the audience through the grotesqueries of Rachmaninov’s “Corelli” Variations. They were performed with much humor, along with outstanding clarity and a delicate touch that was consistent throughout the program.

Her extraordinary artistry lies in her ability to speak very, very softly.

Yet when she launched into Mily Balakirev’s Islamey (1869) with nary a break, the explosion of colors bloomed in the sky. The rapid fire of repeated chords was executed with an unusually high level of clarity as well as velocity. Without the overapplication of the sustain pedal used by many pianists to “Photoshop” away flaws, Arghamanyan showed every detail by storming through the infamous score, using the sustain pedal only to control the harmonics to give depth. The revelation of its rich counterpoints, usually buried under the torrent of notes, added much dramatic emphasis to the exotic, jovial scene. Arghamanyan’s utter confidence in her technique allowed the work to bloom fully, and it was unquestionably the most thrilling and fluid Islamey I’ve ever heard played live.

Nareh Arghamanyan is certainly a welcome returning artist whom I hope to hear again soon.