Violins are made of wood, but in practice, they’re relatively plastic. It’s possible to change from piano to forte in the middle of a note, for example, and, on a continuous fingerboard, any shift can be smoothed over with a slide. The piano is far less forgiving: all notes are struck, and are unambiguously either right or wrong.

Of course, violinist Alina Ibragimova and pianist Cédric Tiberghien, who have played together since 2005, are past wrong notes, and their recital on April 3 at Herbst Theatre was polished. But in a performance of Bach’s Violin Sonata No. 4 in C Minor where neither player used period instruments, Ibragimova seemed to enjoy the advantage of the violin’s adaptive quality — whereas Tiberghien’s piano, in place of harpsichord, was significantly less flexible. 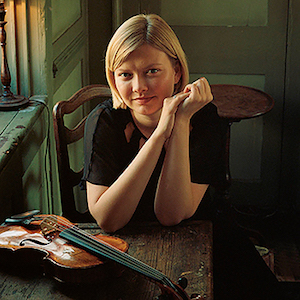 C Minor isn’t a bright key on violin, but, through the use of low positions and open strings, Ibragimova maximized her instrument’s resonance. Tasteful vibrato was an ornament, not a crutch, and she phrased the expressive slow movements almost exclusively with the bow. But while her sound nodded to the baroque, there was simply no way that the piano could sound like a harpsichord: it’s a much more powerful instrument that, with the lid up, overpowered on Monday. In the sparse Adagio Tiberghien’s pedaling was pretty, but in the brisk fugal movements the two hands, which should sound like distinct voices of a trio, blurred into one mass.

If the instruments were at odds in the Bach, however, Tiberghien shone as a soloist in Berg’s period-straddling Piano Sonata, Op. 1. Written while Berg was a student of Schoenberg, it’s a one-movement work that falls between extreme romanticism and atonality: it’s in the familiar sonata form, ostensibly in B Minor, but dissonances accumulate until the audience loses all sense of the home key. 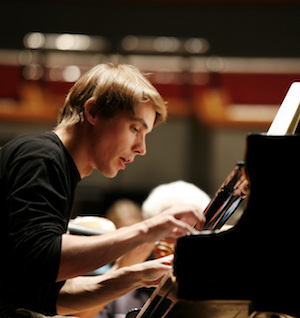 Tiberghien played up these tensions in moments like the exposition’s closing theme, performed so tenderly that it was shocking when the roiling arpeggios crashed in seconds later. And his delicate touch in the pianissimo beginning of the development lay the groundwork for an especially dramatic buildup to the grand fortissimo chord that, at last, sets the piece on its homeward journey.

The duo, too, successfully balanced tensions in Brahms’s Violin Sonata in A Major. It’s easy to lose sight of the elements in the composer’s tempo indications, which often consist of words that don’t quite go together (such as the first movement’s Allegro amabile — “Fast, [but with] love”). Above all, this sonata should sing, and sing, they did, while sampling — but never overindulging in — a variety of other flavors.

There was passion in the slow movement, but never too much, because Ibragimova wisely let some notes pass without notice. There was strength, in the first movement’s abrupt chords, but never ferocity. And there was more than a little magic in the coda’s placid, suspended lines. After a Brahms of this caliber, Schumann’s stormy Violin Sonata No. 2 wasn’t necessary, but it was a welcome bonus.

Though he’s all but forgotten today, the dedicatee of Ysaÿe’s Solo Sonata No. 5, Mathieu Crickboom, was a renowned pedagogue in his time. Perhaps that’s why the sonata reads like a teacher’s encyclopedia of techniques, which Ibragimova handled memorably in the measured glissandi of the double-stopped sixths and in the challenging pacing of the first movement’s final arpeggios. In the polyphonic second movement, some notes needed slightly more time to sing, but, characterized with boisterous spirit from the initial struck chords, Ibragimova’s Danse rustique, alone, made this performance — like her recent recording of the full Ysaÿe set — captivating.