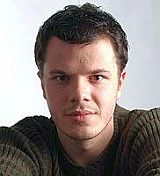 How could I not lose myself completely in the wondrous beauty of baritone Eugene Brancoveanu’s voice during the first set of his Sunday afternoon, San Francisco Performances-sponsored recital? The sound in the San Francisco Conservatory of Music Concert Hall was so glorious that it called to mind the words of the great Italian basso Ezio Pinza, who wrote of singing beside soprano Rosa Ponselle, “lost in the dark splendor” of her voice. Brancoveanu’s uncommonly brilliant, rich, and uncovered baritone may be a very different instrument than Ponselle’s, but it was similarly riveting.

The only reason not to surrender entirely to his instrument, which is fine enough to warrant appearances at the Metropolitan and La Scala as well as for San Francisco and Berkeley opera, was to focus on the translations of Russian composer Georgy Sviridov’s 12-song cycle, Russia Cast Adrift (1987). An ideal vehicle for the Romanian baritone’s generous, passionate phrasing and emotional embrace, the first song, “Autumn,” found his voice totally relaxed and centered. Low notes had a natural, unforced resonance, while the top had a bloom that suggested a voice without limits. And the little bursts and breaks of sound with which Brancoveanu negotiated his higher range — quasi-sobs that gave an emotional kick — worked to his expressive advantage in this Russian repertoire.

Occasionally the vocal line of some of the songs was unvaried, sounding almost like recitative. Similarly, the accompaniment, played by John Parr, head of San Francisco Opera’s music staff, was often quite repetitive. Yet virtually every song was emotionally profound. “Where Are You, O My Father’s House?” for example, seemed to express the noble suffering of a Boris Godunov.

Even when melodies lacked distinction, Brancoveanu’s voice made all the difference. High notes shone at full volume, and were equally gorgeous when voiced softly. Legato was impeccable, as was the ability to build phrases and sustain tension. Although the voice occasionally faltered on softly sustained highs, the performance was immensely gratifying.

If only the same could be said of the entire recital. Deviating from the printed program, Brancoveanu replaced four Bellini songs with Ravel’s Don Quichotte a Dulcinée (1932-1933). These he dedicated to his wife, who was seated in the audience with their two children. That he compensated for a lack of printed notes and translations by summarizing each of the three songs for the audience was lovely, but his decision to speak before each one destroyed much of the spell he had hoped to weave.

Nor did Brancoveanu equal the seductive intimacy that Gerard Souzay and other French greats have brought to these songs. The presentation was a little too forward and forceful, and the little soblike bursts of sound seemed out of place. Brancoveanu had some fun feigning inebriation in the final drinking song, though its boisterousness would have meant more if what preceded it had been sung with greater refinement.

Here and elsewhere, Parr’s playing did not urge the singer to greater nuance. It’s no mean feat to get all the notes right, of course, which he certainly did in a song as difficult as Schubert’s chilling Erlkönig (Erl King). But Ravel’s refinement, the haze of mystery and sadness needed in the four songs of Henri Duparc, and the micro-dynamic shadings that make something special of repeated figures were not to be heard.

Neither artist infused Duparc’s Extase (Ecstasy) with perfume, nor did they suggest the opium haze of Baudelaire’s L’Invitation au voyage. While Brancoveanu produced a lovely half-voice at the start of Sérénade florentine, rarely were high soft tones produced without little falters in the sound. Phidyle, in particular, was handicapped both by plodding repetition on Parr’s part and by the indistinct vocal pitches that occasionally surfaced throughout the Duparc set.

Brancoveanu’s technique and emotional body seemed more suited for the German of contemporaries Franz Schubert and Carl Loewe (1796-1869). He especially excelled in the big emotions of Der Zwerg (The gnome) and Erlkönig. (I could have sworn he started Erlkönig in the wrong place, with Parr expertly filling in as if nothing had gone awry, but two other attendees I checked with thought the entrance flawless.)

If Brancoveanu did not entirely succeed in creating different voices for the father, child, Erl King, and narrator of Erlkönig, his attempt was no less credible than Dietrich Fischer-Dieskau’s. Absent, however, was Fischer-Dieskau and Gerald Moore’s greater sensitivity to tempo changes and space in the final verse. It was one of many “almosts” that characterized the second half of the program.

It was a lovely idea to contrast Schubert’s Erlkönig with Loewe’s own setting of Goethe’s poem, and to have the Erl King resurface in the final song, Loewe’s dramatic Herr Oluf (Lord Oluf). Singing Loewe last confirmed why Schubert is feted for his genius. The sole encore, Strauss’ beloved Zueignung (Dedication), was beautifully sung, even if it lacked the last bit of oomph and flexibility that would have brought the audience to its feet.