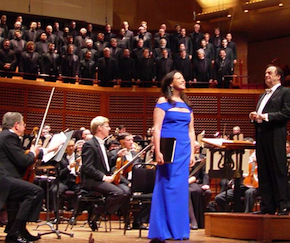 Not even a surfeit of superlatives does justice to the concert, which had the unfortunate limitation of only two performances. Davies Symphony Hall would have easily been filled for another evening just by those yearning to hear this program again.

The wish for a repeat occurred even during the concert, where it was difficult to let each work go and take on the next one. I wanted reprises in turn for Francis Poulenc's high-spirited 1960 Gloria, Igor Stravinsky's intense 1930 Symphony of Psalms (in its 1948 revision), and Gabriel Fauré's serene, deeply affecting 1900 Requiem.

Charles Dutoit's conducting and the wholehearted participation of chorus and orchestra offered three distinct performances, each one reflecting the essence of each work. 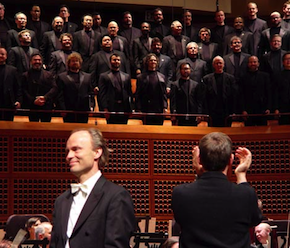 The rhythmic excitement of the Gloria's opening never sounded better than in the SFS Chorus' solid, powerful (but not loud) singing; the orchestra was an equal partner in the difficult, shifting accents of the music. This excitingly operatic, ecclesiastic work received its full due.

Against the musical excellence — from each section of the chorus — diction was merely good, but the sweep of the score is such that not much attention is left for the text, which is simplicity itself.

The soloist in the Poulenc, soprano Susanna Phillips, added an extraordinary dimension to the performance. Few voices can fill the still-cavernous Davies Hall (reduced in size during a reconstruction) the way Phillips does, with an uncanny projection that doesn't depend on volume. It's difficult to describe what Phillips does because her performance is deceptively simple. The voice — beautiful, accurate — is not pushed or audibly supported, it is "invisibly projected."

I was so taken by the mystery of her technique that I moved from row 11 (for the Poulenc) to the back of the hall for the virtual whisper of the Requiem, and still every note Phillips sang came through clearly. Excellence in projection was also noteworthy from the chorus, even in the quietest passages.

Those who favor strong individual characteristics in a voice may disagree, but I was most impressed by the pure, non-idiosyncratic nature of Phillips' sound. Perhaps when she sings opera, the voice takes on the nature of the character. I intend to find out.

In the orchestra, the brass shone all evening. It's too bad there is a substantial (logistically dictated) break between the Poulenc and the Stravinsky because the brass chorale that ends the former is heard in the opening of Psalms, almost as a segue. On the other hand, the intermission before the Fauré is exactly right because that music lives in another domain than the first half of the program. 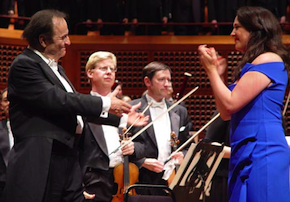 The Stravinsky was all of one piece, the music's intensity maintained (somewhat attenuated by the composer in his "classical period," versus the ferociousness of many of his other works), except for a few passages when the chorus delivered less of the punch that should be. In the orchestra, there was much virtuoso work from woodwind and percussion players, also from two hardworking pianists unidentified in the program (I saw only Robin Sutherland from where I sat).

In the Fauré — enhanced again by Phillips' solo, but not by bass-baritone's Hanno Müller-Brachmann's near-raspy voice — Dutoit's experience and intimate knowledge of the work came to the fore as chorus and orchestra established and maintained the required quiet, unshowy beauty. As the Hosanna's brief fortissimo is heard, the contrast with the majority of the music was all the more appealing. String sections were at their best, both underlying and matching the chorus.

I haven't counted, so I rely on Ronald Gallman's program notes about the sopranos "sustaining 27 bars of a long-breathed melody" in the Paradisum section, but the vision of heaven was clear even without quantifying the effort to get there.