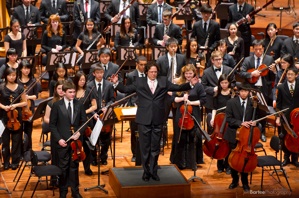 It may have been only a coincidence that the San Francisco Symphony Youth Orchestra programmed Prokofiev’s Fifth Symphony for its season-opening concert at Davies Symphony Hall Sunday afternoon, just two weeks after the Los Angeles Philharmonic played the same piece on the same stage. But it was impossible not to overlay the two performances.

The impulse came not from any (unfair) thought of comparing one of the country’s powerhouse ensembles to a training orchestra made up musicians ages 12 to 21. It came instead from the notions of aspiration and achievement, the intrinsic arc toward some elusive ideal that any musical performance raises. How high and how far can an orchestra reach? How fearless, united, and committed to the cause can its players be? What can they tell us about the music, about themselves, and even about ourselves that we didn’t know before?

Those questions take on an added shimmer when the musicians in question are just setting out to discover their musical footing and identities. The arc of possibilities rises and stretches off toward a long and promising future. We not only listen to the very fine and deeply disciplined musicianship on display at the moment, when the Youth Symphony performs, but we also ponder where all this talent and study might lead in the branching paths ahead.

There were, in Sunday’s concert, any number of moments when the future seemed to have arrived fully formed. In the last movement of the Prokofiev, to choose one example, the violins fell into an intimate conversation with a limber, wryly inquisitive clarinet that charmed, beguiled, and haunted in equal measure. Caught up in the twittery pulse of the symphony’s second movement, the woodwinds winked and smirked with a ripened sense of pungency.

The arc of possibilities rises and stretches off toward a long and promising future.

Manuel de Falla’s festive “Three Dances” from The Three-Cornered Hat opened up some sunny and colorful vistas at the start of the program. Under Music Director Donato Cabrera’s baton, the superb violin section gave off a sweet, warm, forward tone, the perfect foil for the jaunty trumpets, a pair of harps, and those admirable woodwinds again. A gutsy horn solo set “The Miller’s Dance” off in assertive fashion. The brasses checked in with some fine snarling in the suite’s finale. 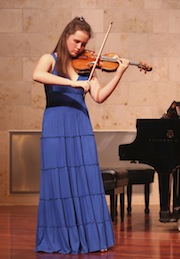 Impressive as those and other passages were, the afternoon reached and sustained its peak in the Tchaikovsky Violin Concerto, with the jaw-droppingly assured Alina Ming Kobialka, 14, as the soloist. A winner of the San Francisco Symphony Youth Orchestra Concerto Competition, she launched into the ferociously demanding first movement with a seductive, full-throated tone, a technique that never felt labored, and a flair for bending and shaping a phrase to make it her own.

Frantic passagework, singing themes, a positive pile-up of double-stops, high-wire harmonics — everything and anything Tchaikovsky demands, she was there to answer with fluidity, drive, and effortless precision. She even looked in command of herself when she was mopping off her neck and face and fiddle, the only sign that any of this fiendish stuff might cause her to break a sweat.

With her comrades clearly pulling for her — Kobialka is the Youth Symphony’s co-concertmaster, welcomed onstage by the ensemble’s customary foot-stamping — the soloist was every bit as winning in the stately Canzonetta: Andante as she was in the concerto’s showy outer movements. The air of delicate mystery she spun in this middle movement seemed to carry like a perfume through the orchestra, which the woodwinds picked up with particular keenness.

Kobialka made present and future converge. The orchestra played its part with sensitivity and brio.

If some shortcomings are currently evident — such as a tendency for longer phrases to separate into their component parts at times, or a heft and muscularity that isn’t fully developed for the big gesture — they are minor ones and sure to be addressed with more age and experience. Kobialka made present and future converge. The orchestra played its part with sensitivity and brio.

Enjoyable as it was throughout, the afternoon did have its deficits. Most notable, from a seat in the loge, was an imbalanced string sound. The cellos and basses consistently faded in comparison with the gleaming violins and violas. The Adagio of the Prokofiev turned murky early on and never quite emerged from the thicket. Cabrera let some tempos slow to the point of almost stalling. And the brasses had their share of gaffes.

Of course it wasn’t flawless. No performance is. What counts, what’s counted in these Youth Orchestra concerts over the past three decades, is the kind of auditory double-vision they induce. Listen to how wonderful these musicians sound now. Now hold that thought, and think about where they’re headed.