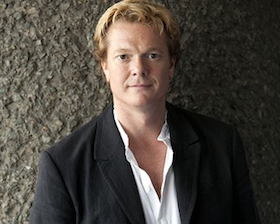 "Save me from curious conscience, that still lords
Its strength for darkness, burrowing like a mole;
Turn the key deftly in the oilèd wards,
And seal the hushèd casket of my soul …"

As John Keats' words died away and the sound of a distant horn completed Britten's achingly beautiful 1943 Serenade for Tenor, Horn, and Strings, Op. 31, there was a rare sense of musical bliss in Davies Symphony Hall Thursday night. And yet, there was more, much more to come.

In a lifetime of concerts, there are many to be treasured, but few that stand out so prominently as this current subscription event by Michael Tilson Thomas and the San Francisco Symphony on fire. Sustaining this level of excellence cannot be guaranteed, but additional performances this weekend are most promising.

Serenade is both essential and the best of Britten. Six songs, to text as varied as those of Tennyson and Blake, form a vital whole that enchants, elevates, lingers on in the ears and the heart.

After Robert Ward played the difficult solo horn introduction with ease, the other star of the performance, tenor Toby Spence cast a spell over the hall with the music to Charles Cotton's poem: 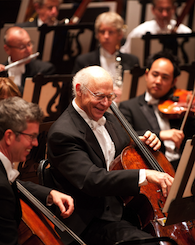 "The Day's grown old, the fainting Sun
Has but a little way to run,
And yet his steeds, with all his skill,
Scarce lug the Chariot down the Hill."

Spence's open-throated, gorgeous singing revealed a thrilling mastery of the difficult combination of floating high notes and resounding chest notes. Having beat thyroid cancer a few years ago, the tenor's voice and artistry are their peak. Ward and the SFS strings under MTT's passionate direction helped cradle Spence's performance through the half-hour cycle that ends all too soon.

The second half of the concert is taken up by Shostakovich's 1971 Symphony No. 15, and once again, MTT/SFS created the apex of a musical experience with most of the 40-minute-long work weaving magic over the hall. "Most" is a personal judgement based on a view of the symphony that separates the funny/bright/silly first movement from the rest of what is a sequence of utterly complex, involved thread of interwoven, mostly quiet passages.

That opening Allegretto features the galloping main theme of the William Tell Overture, supposedly in the setting of a toyshop at night, but possibly hiding great philosophical-political statements — it's subject to interpretation (see below) while the contrast with the rest of No. 15 is clear and obvious. 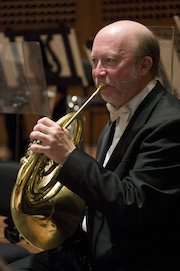 For good reasons, everything about Shostakovich is discussed, interpreted, and debated, often to excess. In the case of this symphony, that ranges from the late great Michael Steinberg's program notes to Jeff Dunn's specific speculation about what's what in his SFCV review of the 2005 San Francisco performance:

For me, the piece works as an autobiography superimposed on the history of the Soviet Union. The four movements could easily be called Lenin, Stalin, Khrushchev-Breshnev, and Shostakovich, the first representing the energy and idealism of the 1920s; the second the Great Terror, purges and war; the third the ineffectual bureaucracies of Nikita Khrushchev and Leonid Brezhnev, and the fourth the composer’s estimation of his own significance, a ditty-maker forced to confront and be crushed by fate.

I tried something new Thursday night, and it worked wonderfully well: a great performance was further enhanced for me by disregarding all the learned (and other) discussions about the meanings in the Shostakovich, and just listening to the music — less agitated than usual from the composer, more thoughtful, brooding, and emotionally overwhelming.

The Adagio showcases an extensive cello solo and Michael Grebanier (with the orchestra since 1977) was magnificent performing it. Concertmaster Alexander Barantschik had his brilliant solos, too, and in this movement — as in the entire symphony — the brass section excelled in muted and heroic solo work as well as providing pivotal chorales. 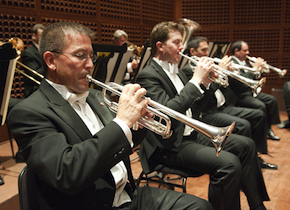 Perhaps no borrowed material has ever been more effectively used than the theme of the Death Announcement from Wagner's Die Walküre in the last movement of No. 15, the music surging and ebbing, quieting and eventually, in Steinberg's words, "The chattering xylophone turns the strings’ hollow chord to clear A Major, and with a bell-tone, quiet and bright, like that with which the music had begun, it now disappears."

After which, silence seems to be more appropriate than the (well-deserved) ovation.

It's of no consequence, but to complete the report, the program-opening work needs to be mentioned: It's Copland's raucous-spiky 1942 Danzòn Cubano, lasting six minutes ... after which it took four minutes to rearrange the stage and get on with "a concert to remember."

The concert is being recorded and will be broadcast on KDFC-FM beginning at 8 p.m. July 1.