Applause broke out at unexpected times Wednesday evening in Davies Symphony Hall as guest conductor David Robertson wowed the San Francisco Symphony audience. Of course, it didn’t hurt that he had virtuoso pianist Yefim Bronfman as his soloist for a terrific program.

Robertson opened with Australian composer Brett Dean’s Carlo, followed by a zesty performance of Haydn’s Symphony No. 94 in G Major, the “Surprise” — an old friend I hadn’t encounter in aeons. The second half was devoted entirely to Brahms’ Piano Concerto No. 2 in B-flat Major, Op. 83, played by Bronfman in high-Romantic style. 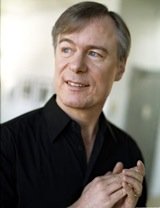 Dean, born in 1961, has been making a name for himself on the international scene, the first of his countrymen to accomplish that since the outstanding Peter Sculthorpe. Carlo is a sort of homage to Prince Carlo Gesualdo (1560-1613), the major avant-garde composer of his time, who published outstanding harmonic adventures in his madrigals.

It’s no accident that Stravinsky orchestrated three of those madrigals in 1959 as his Tres sacrae Cantiones, and, a year later, three more in Monumentum pro Gesualdo. And, oh yes, Gesualdo managed to murder both his first wife and her lover, then get away with it.

Carlo is scored for 15 solo strings plus a tape of Berlin’s RIAS chorus in the background singing — what else? — Gesualdo’s music. Oddly enough, the strings play a role something like a continuo accompaniment. The orchestral players were reduced to mostly disjoined atonal figurations, many of these played pizzicato.

There were precious few melodic elements amid those, though the strings did sometimes slip into little snippets of melodic canons. For variety’s sake, Dean included a kind of brief cadenza for the concertmaster about two thirds through the 20-minute work. I realize that this description may well suggest that the piece sounded like sonic bedlam, but in truth, Carlo is a very genteel, effective elegy of quiet reflection.

Another surprise came during the Brahms Concerto when Bronfman took bows after the first and second movements. Normally, that would only occur following the end of the final fourth movement. And, in truth, I’ve never before witnessed the like — not that he didn’t deserve it.

Taming the Monster The Brahms Second is a monster to play, largely because it’s so unreasonable in its technical demands on the soloist. It is not so much a concerto for piano and orchestra as one against pianists, with orchestra. Still, Bronfman had the full measure of it, including his uncommon sensibility for using the correct dynamics. He had the piano roaring heroically when appropriate, and yet virtually purring during the soft passages. That’s unusual. Most pianists simply bang out 90 percent of the piece.

Then too, he had Robertson’s perfect tempos from the podium: properly broad in the first movement, wildly passionate in the second, elegantly restrained during the slow movement. The finale virtually giggled as it danced through Brahms’ Viennese humor. Funny, I’d never thought of Robertson as a particularly Romantic conductor, but I was wrong. His Brahms was as warm and expressive as Bruno Walter’s or Sir Georg Solti’s. The Brahms was Gold Star all the way.

Robertson has always displayed a sense of objective scholarship when conducting, be it Beethoven or Boulez, with an artistic feeling for tempo. I’ve not heard him conduct anything that was too fast or too slow.

For the Haydn, those virtues were much in evidence. Tempos were spot on and balances perfect. As a nice touch, Robertson used the original instrumentation that Haydn had called for in London when he premiered his “Surprise” — reduced strings, for instance; Robertson used only six cellos and four double basses. That’s plenty enough for a Haydn symphony. More than that, and the sound clogs.

The Symphony No. 94 is an odd case. In my student days, I rarely ever heard Haydn symphonies other than the 88th or the 94th. I remember that eyebrows were raised when RCA dared release Toscanini’s Haydn 97th. The feeling was, “Who’ll buy it?” (Lots did.)

But in the late 1950s that all changed, thanks in part to recordings of the Haydn Society. Only then did the general public come to realize the full panoply of the composer’s accomplishments. These days, it’s nearly always the unusual ones that get most programmed.

When Seiji Ozawa was director here, he did a slew of the unusual Haydn symphonies, three or so per season, including some of the most dangerous — like No. 51, with its stratospheric horn solo in the slow movement. Till then I hadn’t known a horn could attain such altitude of pitch.

Meantime, the old favorites seem to have fallen out of favor with most conductors. The San Francisco band, for instance, hasn’t programmed the “Surprise” since 1992. But it’s such a wonderful piece, brimming with folk-dance colors. Robertson certainly had that element in hand. When I glanced down the aisles to my right and left, all sorts of folk were bobbing their heads or swaying in time with the music. I myself found it difficult to sit still.

As Noël Coward’s line goes, “Oh, I couldn’t have loved it more.”