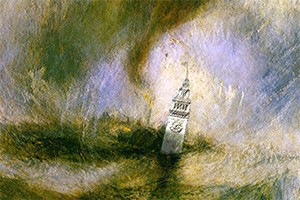 Wanting to be a composer when your father is a famous one is a tough row to hoe. Few have succeeded in modern times. The worst-case scenario was the career of Siegfried Wagner, whose many mediocre-at-best operas were doubly overshadowed by and constantly compared with those of his father Richard. The son of Harald Sæverud (1897-1992), who for a while was the most famous Norwegian composer after Grieg, even changed his name to Ketil Hvoslef to break the connection with his dad. But Samuel Carl Adams sticks proudly to his name, and lets his music, not a courthouse, declare its familial independence from father John.

S.C. Adams’ Drift and Providence, which received its premiere with Miami’s New World Symphony in April, led off Friday’s San Francisco Symphony concert, with Music Director Michael Tilson Thomas conducting. The music stems from Adams’ feelings of dislocation as he composed the piece in several, not always predictable locations. Its ethos of transition between areas of quasi-stability seems to reflect the angst described on his website:

I want to be a west coast artist. This, unfortunately, is a task more difficult than it sounds (and not for the obvious reason that I spend most of the year in Brooklyn). What I mean is that so much of what westerners are is defined by their non-nativeness, by their displacement after some sort of great migratory journey away from establishment. I am thinking of artists and businessmen alike - pioneers and religious zealots. 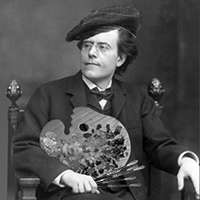 Adams structured the piece around three places not in the New England of his father’s birth (or that of composers Charles Ives or William Schuman), but “imagined places” of the “spirit,” according to Scott Foglesong’s excellent and detailed program notes. Two of the places nevertheless have geographic designations in San Francisco, the first section, “Embarcadero,” and the second, “Divisadero.” The third, “Providence,” is not in Rhode Island, but according to the composer “suggests guidance and protection—either human or divine.” Between the three “places” are transitional sections called “Drift I” and “Drift II.”

Since the Embarcadero is a temporary place you leave from, and the Divisadero is a divide or ridge with a view, something you pass over while going from one place to another, a better description of the mentality of the music would be “No Place, Like, No Home,” the seeking of youth in a world of vague eventualities, with Providence as fate. Or maybe just plain “Drift.” That’s what the music sounds like—and I mean it the most positive sense.

The music goes nowhere, that is, there is a certain stasis to it despite its variety, but it does so with a highly original orchestral texture underlain by a satisfying structure, based on periodic repetition of elements. The vagueness of the resultant orchestral coloration over the organizational solidity results in an effect like the Golden Gate bridge in a dense, breeze-blown fog. Without a score, I can’t detail many of the fascinating effects of Adams’ music, but two of the most eye-opening are Adams’ rubbing, not striking, of cowbells, and the judicious use of computer-generated background sounds.

The overall scope of the music is to focus the listener on the multifold transitions of soundscapes with few demarcated boundaries. Three of the four section boundaries cannot be picked out at first hearing, nor does it matter if you do so. Only one real theme, a foghorn if you will, persists—a descending stepwise line of two or three notes. The effect struck me like a Turner painting, with sharpness (of the one simple theme) and blurriness (of the innovative orchestration) at the same time. Drift and Providence heralds a remarkable new voice on the music scene.

The painterliness of Adams’ tone colors got me to thinking: if he’s a Turner, what would Mahler be? His Symphony No. 5 is so wide ranging, embracing the central European world of his time in so many aspects, he’d have to be a turn-of-the-20th-century Breughel, holding many brushes at once and equipped with a vast palette of colors ranging from the mud of a grave to the glitter of a Viennese café, to the white of an alp.

No one is better prepared to convey Mahler than Tilson Thomas, and he did so with such energy and commitment, he brought an unbridledly enthusiastic house to its feet at the conclusion. I’ve reviewed MTT’s exemplary approach to this symphony in his two previous outings, in 2004 and 2009. As in the previous performances, MTT did a great job of bringing sense to the second movement. Even more pronouncedly than in 2009, he indulged in rubatos, most of which worked (though in a couple where drastic changes in dynamics were marked in the score, incorporating an unmarked rubato laid it on too thickly). The powerful treating of dynamics in the Mahler made me wish I had heard the same in the Adams: a fortissimo there seemed only as loud as a forte in the Mahler.

All in all, the interpretation seems to have changed little in nine years, and was demonstrably effective. But when it comes to the most famous of the five movements, the Adagietto, fashion may be changing. I have become convinced by Benjamin Zander’s superb lecture on the symphony (that comes with his Telarc recording on a second disk), that the Adagietto, with ample evidence indicating it’s a love poem to his wife Alma, whom he married during the composition of the symphony, should be played at a less lugubrious tempo. Zander does it in 8:33, MTT took around 11 minutes. (Details on this issue may be found in an article by Jeffrey Ganz.) It sounded too slow and funereal to me.

Interpretive issues paled, however, in the face of the spectacular playing of symphony musicians. Principal trumpet Mark Inouye outdid even his own high standards, delivering the best opening fanfare, and many other solo passages, that I’ve ever heard in the work. The rest of the brass, and everyone else, were almost always in top form. San Francisco has every right to be proud of their accomplishments and leadership. Paint in an A on their report card in 100 colors.