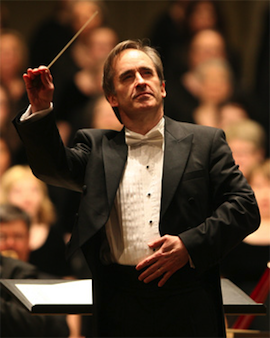 The American conductor James Conlon (b. 1950) has built himself a reputation as champion of the music of composers that was officially condemned by the Nazi’s as Entartete Musik, or ‘degenerate’ music.

This piece of Third Reich terminology applied to any kind of music that was deemed unacceptable by the Nazi regime; especially to defame music with modernist tendencies such as atonality and jazz influences, and most of all to suppress Jewish composers and their work.

Some of these composers, such as Arnold Schoenberg, Kurt Weill, and Paul Hindemith, went into exile and rebuilt their careers abroad, but many of them stayed behind and ultimately perished in concentration camps, their voices silenced by the Nazi regime and their compositions forgotten and hidden from music history.

Conlon first discovered this repertoire in 1993, when he was General Music Director of the City of Cologne and came in contact with the music of Viennese composer Alexander von Zemlinsky (1871-1942), of whom Conlon and the Cologne Philharmonic made nine acclaimed recordings, including three operas.

This led to the discovery of other ‘degenerate’ composers, and over the past two decades Conlon has brought many of their works to concert halls and opera stages in Europe and the United States. Yet it was not until his latest appearance with the San Francisco Symphony that he introduced a piece by Czech composer Erwin Schulhoff (1894-1942), in the form of the Allegro con brio (Scherzo), from his Symphony No. 5 from 1938.

Hopefully, this little taste of Schulhoff will lead to performances of more of his music by the San Francisco Symphony. It would be a delight to attend.

The Scherzo is an energetic and electrifying eight-minute glimpse of a composition with a highly original and very interesting voice. In the fifth symphony it follows an expansive, brooding Adagio (look up Schulhoff on YouTube) and in the concert hall it overwhelms the senses with its explosive, angular, and brassy eruptions; hammering rhythms, and shrieking outbursts, all cast in a Rondo that is somewhat monolithic but clearly structured. Hopefully, this little taste of Schulhoff will lead to performances of more of his music by the San Francisco Symphony. It would be a delight to attend.

Schulhoff’s energy level was generously matched by French pianist Jean-Yves Thibaudet and his rendition of Shostakovich’s Concerto No. 1 in C Minor for Piano, Trumpet, and Strings, Op. 35, performed together with SFS Principal Trumpet Mark Inouye.

Shostakovich’s first piano concerto is a wild and crazy piece that is full of musical quotes, style references and parodies; the concerto’s slow movement echoes a Michel Legrand-style movie soundtrack, but flows through hints of Debussy and Tchaikovsky, back to a very recognizable Shostakovich.

Thibaudet, who played (uncharacteristically) from sheet music, is a ferocious pianist; he gave the exuberant piano part substance and vigor, while Inouye’s crisp and sprightly trumpet responded with comments, teases, taunts, or downright mockery, before they concluded the piece together with a frenetic race to the finish.

With his fluid and somehow very masculine conducting style, maestro Conlon laid out Tchaikovsky’s Symphony No. 6 in B Minor, Op. 74, Pathétique, in all of its soulful Slavic glory, but without any gratuitous beautification or unnecessary romanticism. This Pathétique had the right amount of grit.

The Symphony’s brass and woodwind players had already demonstrated their considerable power in the Schulhoff Scherzo, but the Pathétique allowed them to show their more elegant side, with a round and shiny brass section and graceful and serene woodwinds.