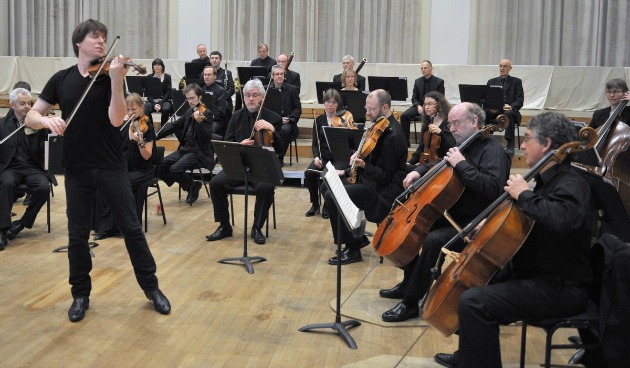 A program that looked rather ordinary going in – the Academy of St Martin in the Fields playing standard repertory works by Prokofiev, Bruch, and Beethoven, along with a less familiar Schumann extract – unspooled as an intriguing and instructive tale of two concerts Sunday, March 6, at Davies Symphony Hall.

The first half of the evening was flat-out wonderful. With superstar violinist and St Martin Music Director Joshua Bell leading the way from his concertmaster post, the orchestra opened with a limber, wit-filled, and joyous performance of Prokofiev’s “Classical” Symphony, No. 1. The chamber-scale band muscled up a bright, full-bodied sound without ever pushing or straining to do it.

The first movement of this compact, 15-minute work was all light-footed ebullience. High-contrast dynamic shifts set off the bassoons’ amusingly plodding busywork. The strings gave the early bars of the Larghetto a glassy shine, deftly countered by the woodwinds’ warmth.  The cellos were the first to feel the conducted heat and return it in kind.

The short Gavotte, with music the composer later repurposed in his famous Romeo and Juliet ballet score, got a crisp, clean-edged, aptly “Classical” reading, without any balletic swooning.   The Finale whipped by like a cartoon chase scene, with some of the hammer-blow accents summoning a Wile E. Coyote emergency to mind. When does an audience get to grin this much at the symphony?

Bell, still boyish and bouncingly energetic at 48, promptly changed the atmosphere. Dressed less formally than his players, in black pants, vest, and open-necked shirt, he mounted the warhorse Bruch Violin Concerto No. 1 and never let go of the reins. His tone and approach to this dangerously lush material was both emphatic and entrancing from the start. The sound he evoked from his 1713 Stradivarius felt so deep and fibrous that a listener had the almost visceral sense of hearing the instrument’s wood itself sing. His double-stops had an earthy, meaty bite, fitted into his probing, elegant long lines.

When he wasn’t busy with the solo part, Bell turned and pulled some vibrant work from the horns and woodwinds. Back at work with his violin, this remarkable performer gave the Adagio an operatic lyricism, spinning out an aria at once ravishing and deeply felt. The orchestra was with him all the way, from their own urgent expressions to the wistful plucked notes that bring the movement to a close.

The Finale was full of exciting flourishes and figurations, but there was nothing flashy or pyrotechnic about it. From beginning to end Bell and his Academy took this over-exposed work seriously and found both details and a defining through-line that often go missing. It’s hard to imagine a more thoroughly absorbing and persuasive performance of the piece.

The second portion of the program began with Bell once again at center stage, for Schumann’s Elegy for Orchestra, a Benjamin Britten arrangement of the composer’s problematic Violin Concerto in D. Despite some tender exchanges between the soloist and principal cellist Stephen Orton, the Elegy came off as pretty but aimless. Bell was once again impressive, with his tender phrasing, soft-focus syncopation. and quietly potent trills. But a larger musical purpose never took hold.

Back on his piano stool as concertmaster-cum-conductor, Bell led the orchestra into more substantial problems in Beethoven’s Symphony No. 8. No sooner had the powerful opening theme made its impact than the wobbling set in. The cohesion was off. Entrances were patchy. Accents landed harshly.

Things did not improve much in subsequent movements. The woodwinds bleated too strongly over some string fury and finesse in the second movement. The cellos’ chatter in the middle section of the Menuetto went all but unheard, with the balance so far off. The final Allegro felt forced and frantic for much of the way. Three of the four movements trailed off uncertainly, without much sense of an ending.

The Beethoven may have exposed a liability of St Martin in the Fields’ podium-free approach that was not apparent earlier on. It’s one thing to master Prokofiev’s fleet and tightly hewn “Classical” Symphony and quite another to manage the whirling complexities of Beethoven’s Eighth. Bell is a such a masterly soloist that his sheer musicianship and force of will held sway in the Bruch. It probably helps when he is on his feet and fully visible to his players. But in a lesser work like the Schumann or one that demands a conductor’s full attention, the ensemble lost much of its focus and technical command.

If nothing else, Sunday’s concert made this much clear: Conductors really matter.

Editor's Note: This article has been corrected. It originally stated Mr. Bell's age as 39.