On paper, last week’s San Francisco Symphony programs looked like meat and potatoes repertory, but Friday evening’s performance in Davies Symphony Hall turned out to be more like servings of Salzburger Nockerl with a well-made Kir Royale to wash it down. 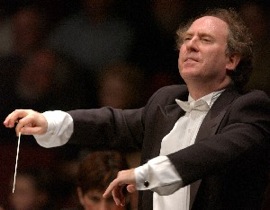 In a way, the orchestra had to overcome finding a conductor to take over from Bernard Labadie when he bowed out. (No explanation was offered.) That proved no impediment, as Jeffrey Kahane took the podium for performances of the previously announced works. He opened the evening with Mozart’s Symphony No. 35 in D Major, K. 385, the “Haffner,” and closed with the even-grander Symphony No. 41 in C Major, K. 551, the “Jupiter.”

Between those, Canadian virtuoso Marc-André Hamelin played a rousing account of Mendelssohn’s whirligig Piano Concerto No. 1 in G Minor, Op. 25. Whether as performer, pianist, or conductor, it’s known that Mendelssohn favored quick tempos. As composer, he was half objective classicist and half Romanticist — Romanticist but not sentimentalist.

Hamelin captured all those virtues flawlessly, with astounding dexterity. The sheer, glittering accuracy of his sturdy fast passages sounded as if fireflies were popping out of the instrument. Yet for that nearly Mozartean slow movement, Hamelin played with the utmost delicacy and an elegant application of subtle rubato.

The result in the central slow movement was not so much pretty as it was beautiful. It brought to mind that in its day, this concerto was as often programmed as the Tchaikovsky First or Rachmaninov Second are today. Indeed, during most of the 19th century, every piano student of the Paris Conservatory had to master it. That, or you simply didn’t graduate. It boggles the mind that performances of the Mendelssohn First are so infrequent these days, since it is always such a success with audiences.

Kahane also tended toward quick tempos even for the minuets. The “Haffner,” Mozart’s most exuberant symphony, posed a real challenge to the strings, especially the low ones. And my, how marvelously virtuoso a performance Friday’s was. This was first-rate playing worthy of the most famous world ensembles. Even in Vienna or Salzburg, they don’t play it any better.

As for the “Jupiter,” it’s possible to merely let it flood over you as pure pleasure. But I think you almost have to have studied composition and counterpoint to fully appreciate how miraculous is the genius within it. Had Mozart written nothing else, he’d still be ranked among the world’s all-time greatest.

First, there’s that poignant slow movement, following the fanfare-like first movement. The Andante delves into then-unheard-of dissonances and radical key changes. What can start as a simple rising arpeggio will suddenly strike a dissonant chord that’s like a knife thrust into one’s emotions. I suppose that’s what Haydn had in mind when he said of Mozart, “He exceeds me in matters of harmony.”

Great conductors typically emphasize such moments with a wisp of relaxed tempo. Thomas Beecham was famous for it, as were Joseph Krips and Rafael Kubelik. Kahane, however, just kept up a steady pace. So too, his quick pace through the Menuetto was at Allegro, whereas it’s only marked as an Allegretto. Those two movements were good, but not of gold-star quality.

Like the first movement, the finale performance deserved special praise. Kahane achieved an excellent clarity of balance, so that listeners could hear all the complicated counterpoint in Mozart’s double fugue. That’s no small accomplishment.

This “double fugue” concept entails two principal thematic ideas. Each can be used in four versions: straight on, inverted, in retrograde, or in retrograde inversion. So you have a total of eight types of interrelated thematic concepts to deal with.

Mozart places these assortments in all sorts of combinations, and at the peak of the movement — merciful Heaven! — they’re all superimposed on one another at the same time. Mozart’s studies of Bach’s technique late in his life certainly paid off here, for even Bach wrote nothing more breathtaking.

All this was done by the orchestra, mind you, while maintaining a sense total joy, a feeling of good spirits that were the hallmark of the entire concert. A few minor blemishes were detected, yes, but nothing major.

To tickle the palate: Since I’ve never seen Salzburger Nockerl on a menu outside of Austria, other than at a private dinner here, it seems worth an explanation. It’s a light, baked meringue soufflé about the size of half a football, flavored with a little sugar and grated lemon zest. It’s usually served with a slosh of honey-flavored simple syrup over the top, plus a few berries for garnish. A Kir Royale is, of course, a champagne cocktail flavored with a bit of black currant liqueur and a little twist of lemon.