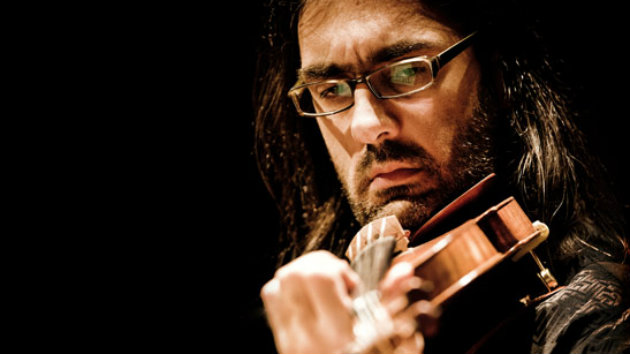 Straight-backed and devoid of any gestural flourishes that many soloists employ, his shoulder-length black hair framing a sober, long face and dark-rimmed glasses, the Greek violinist Leonidas Kavakos seemed the antithesis of the virtuoso showman at Davies Hall on Friday, Nov. 13. Appearances were not deceiving.

In a striking and original interpretation of the Sibelius Violin Concerto with the San Francisco Symphony, Kavakos stripped this extravagant work of all indulgences to deliver a lean, purposeful, and deeply absorbing performance.  The sense that something different was about to happen was apparent right away.  From a quietly insistent opening phrase to an early cadenza, Kavakos staked out his territory with a woody, fibrous tone – reminiscent of a fine baritone’s probing, amber-toned voice – that seemed to stride into the score instead of sailing across its swooping surfaces.

A propulsive and coherent account of the concerto flowed from there. The work’s lyrical, long lines and furioso fiddling, which can be milked for self-contained effect, took on a distinctive character here. Kavakos honed in on each measure and phrase attentively and made them connect to a larger whole. Everything, from tightly furled trills to octave-spanning excursions, was finely wrought. The long and emotionally layered first movement, in which orchestra and soloist sometimes move in transverse directions, came off with an animating tension. The passage where the soloist first joins the other violins and then launches forth with his own arching material had the stirring feel of a struggle overcome.

Kavakos may have carried a shade too much drive into the Adagio, which took on a slightly harsh edge at first. But with the woodwinds leading the way, conductor Michael Tilson Thomas worked out a shapely and substantive accord with Kavakos as the movement proceeded. The passage where the soloist first joins the other violins and then launches forth with his own arching material had the stirring feel of a struggle overcome. Kavakos worked some wondrous dynamic effects in pensive, introspective echoes. He was extrovert and introvert both, a fully developed musical character.

The thumping cadence of the final movement invites a kind of broad, folk-dance humor. The program note referenced Donald Tovey’s description of this Allegro as “a polonaise for polar bears.” Neither Kavakos nor MTT fell for the easy, obvious romp. Right to the end, through thickets of double stops and a minefield of sturdily accented rhythms, the concerto held its decisive, singular footing.

The evening’s all-Sibelius first segment began with The Swan of Tuonela. The orchestra gave this 10-minute tone poem a grave and tender reading. The strings spun out a curtain of natural, watery light, with the low rumble of a bass drum in the distance. Even the violin pizzicatti sounded moist. Russ deLuna embodied the swan in his glidingly suave English horn solo. The cellos provided the sweet soft landing.

Schumann’s Symphony No. 3 (Rhenish) filled the short second portion of the program. Tilson Thomas is devoting season-long attention to the composer. With the recording equipment in place on Friday, he tore into this five-movement work with evident appetite, a big sound and driving tempos. The orchestra delivered what he asked for, with the horns having a particularly strong night.

Exciting as it was, in stretches, this Schumann Third strained too hard for impact. There was a sense of the music all taking place in the foreground, brightly lit, with not enough spaciousness or dimension. The first movement was full of declamations, one after another. The Scherzo offered little in the way of contrast; something a bit more light-fingered might have aerated a performance that kept hard charging from start to finish.

The fourth movement, marked Feierlich, was the happy exception. Here, in a movement written in tribute to the Cologne Cathedral, the foursquare approach to the music worked best. Piece by piece, the orchestra evoked the grandeur and somber grace of that mighty church. The trombones added long, softly polished shafts of light.

There was more big sound in the final movement. But volume, bright timbres, and forward-thrusting tempos didn’t add up to a fresh or especially dramatic account of the piece. This Schumann performance received the respectful but slightly distant response it had earned. Maybe, when it’s been sculpted into a finished recording, there will be more than met the ear on Friday night.