There was a whole lot of noise going on Friday, October 12, at Davies Hall, in the second of three weekend performances by the San Francisco Symphony. The audience clapped between movements and all but pummeled cello soloist Truls Mørk with applause after his heroic pursuit of Prokofiev’s sprawling Sinfonia concertante. Someone’s listening device let out at intermittent high hum. And then there were the inevitable talkers, coughers, and throat-clearers.

In a way, all the clamor was appropriately keyed to a program scaled for big-sound impact. Under guest conductor Manfred Honeck’s demonstratively gestural guidance, the orchestra steered boldly through the sprawling terrain of the Prokofiev before intermission and the emotional and lyrical dimensions of Dvořák’s Symphony No. 8 in the second half of the evening. 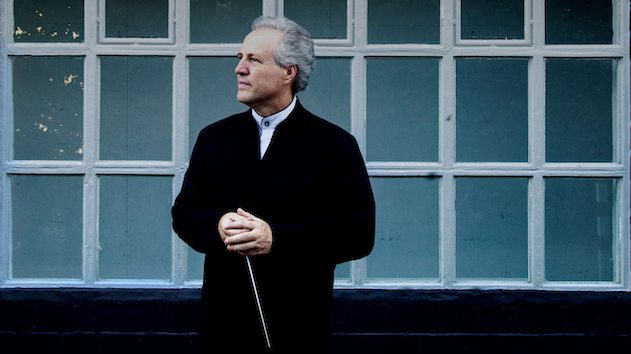 The music-making was filled with impressive feats. With the cellos positioned in the middle and the basses perched up near the stage-right percussion section, Honeck invoked a deeply rooted, brawny tone. The brasses sang out and snarled, preened, and joined in proud choruses together. Timpanist Edward Stephan was an emphatic presence. So were the woodwinds, by turns pungent, pleading, and impetuous.

Exciting as this kind of full-throttle performance can be, the experience for this listener was less than the sum of its assertive parts. In both conception and execution, the evening landed so forcefully that some of the charm and ingratiating suppleness of the music, especially in the Dvořák, was not well served.

At nearly 40 minutes, the Prokofiev is a large and demanding showcase for the soloist, ripe with singing melodies, rapid passagework, double and triple stops, and repeated reaches to the instrument’s high range. A revision of an earlier cello concerto, at the behest of Mstislav Rostropovich, the piece is framed out in three, eventful movements.

The works gets off to an engaging start, with a striding figure in the orchestra that’s soon picked up and elaborated by the soloist. Mørk, playing a dark-hued cello, in his San Francisco Symphony debut, made a keen impression early on, his tone and phrasing walking a taut line between lyrical and brusque. Light and shadow seemed to flicker.

The soloist, as he did throughout, established frequent eye contact with Honeck. Conductor and cellist seemed very much of a like mind. But as the movement wound on, the collective focus drifted. Passages ambled, draining away color and purpose.

At the outset of the following Allegro giusto, a sustained fiery flourish and skittering development proved arresting. There were starkly handsome melodies. The orchestra generated a seraphic sheen at one point. Mørk tore through those double and triple stops in a cadenza. A jaunty tambourine kicked in.

Once again, however, in Prokofiev’s prolix middle movement, the music started chasing its own tail. To be sure, some of it owes to the composer’s overly generous writing. But the musicians never quite made a convincingly argued case. The final movement offered yet more mixed results, with bursts of humor, a sweet string quartet interlude, and rippling figures offset by abrupt dynamic shifts and some intonation problems at the cello soloist’s high end. Then came a concussive finale and all that applause. It happens sometimes: One listener’s experience just doesn’t chime with the audience’s fervor.

Honeck, music director of the Pittsburgh Symphony for the past decade, is a forceful, high-energy presence on the podium. He pounced on the Dvořák Eighth and came out of the gate with a big, rounded sound that became the driving vector for the performance. The trombones added a brightly burnished shine. The French horns leaned in hard.

And so it went, with some smashing effects and lovely effusions. But the more wistful, mordant character, the folk-tunes and inward meditations emerged imperfectly and got swallowed up in the volume and momentum of this reading. As quoted in the program notes, Dvořák biographer Hans-Hubert Schönzeler called the composer’s Eighth “the most intimate” of his nine symphonies. There were lots of qualities to ascribe to this performance — blazing, propulsive, dramatic, and forceful. “Intimate” would not be on the list.