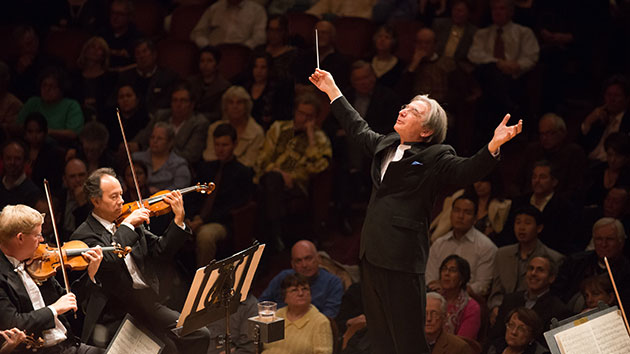 Festive and musically various, Michael Tilson Thomas’s final gala opening as music director of the San Francisco Symphony raised a happy toast on this farewell year of music making. How fitting it was that the serious business of the season would get underway the following week with Mahler’s soul-searing Symphony No. 6, which occupied the entire program on the Sept. 12—15 concerts at Davies Symphony Hall.

MTT and Mahler are always a compelling match. No composer has been more central to the conductor’s 25-year podium tenure and legacy here. The Sixth took on special potency and cathartic resonance 18 years ago, when the orchestra played it the day after 9-11 attacks. Thursday’s concert fell on the anniversary of that performance.

It’s impossible to say how many listeners may have had that night in mind when they filed into the hall; many, no doubt, were too young to register or remember those events. From the moment the music began, the timeless power and authority of this remarkable work took hold. Great music, powerfully performed, intensifies everything. It amplifies and concentrates whatever listeners find in it, from the deeply private to the universal, the specific anguish of the times to the striving aspiration of humankind.

In a stunning opening movement, the conductor and his orchestra captured it all. The stalking opening march, the plaintive urgency of the brass, the stark collapse from A major to minor, the manic rattle of a xylophone, and a multitude of other details unfolded with a sense of terrible inevitability and momentum. The strings sounded both bright and deep, heaving out long breaths and dying gasps. With the first violins surrounded by the cellos and basses to the left of the podium and the second violins and violas (and two harps) to the right, MTT elicited a vibrant, febrile tonality.

The Allegro, marked “Vehement, but vigorous,” unfolds eventfully, with dramatic swerves in feeling and effects. The woodwinds offer a tender “Alma” theme (in tribute to the composer’s wife). The grim march music keeps breaking in. A wistful congeries of celesta and offtstage cowbells seems to tame the prowling, restless beast and induces a sweet exchange between the French horn (an achingly beautiful turn by principal Robert Ward) and the first violin (Alexander Barantschik, equally fine).

On it went, with this animating feel that everything was somehow pressurized, with a great deal at stake. That’s not because the musicians were pushing anything or playing too loudly — the dynamics were splendidly controlled, by turns thrilling and supple. MTT and the players have this music in their bones. That kind of surety enabled risks — to sound almost reckless at times, verging on chaos. The final measures came off with a gleaming ferocity and force.

The Scherzo that followed was a different matter. Instead of fully digging into the movement’s satiric vein, MTT chose to pull back, as if to contemplate and muse on Mahler’s reconfiguration of what transpired in the tempestuous Allegro. The tempos were deliberate, spacious, even slack at times. That allowed certain details, like the woodwinds quacking comically at each other, to emerge afresh. But it also drained a certain sense of pungency from the movement.

The Andante was a wonderment of transformation. Once again employing expansive tempos, Thomas laid out an exploratory journey. The strings sounded plush, only to dissolve into pianissimo fragments. The woodwinds pondered in a mellow mood and posed quizzical responses to one another. A defining solidity seemed to rise from below, in sweeping string arcs, reasserting that sense of urgency from the first movement.

Together the two inner movements demonstrated one of the great strengths of MTT’s leadership and his band’s commitment. Here was a willingness, an eagerness to think differently, challenge assumptions, approach the score with curiosity about his musical and emotional possibilities. Nothing is settled, nothing certain. This Mahler Sixth was surely no voice print of past performances, including the one from 18 years back.

The performance ended in a Finale of more discoveries, more daring and brawny assertion, shimmering and sometimes frightening flares of orchestral color. With its repeated, thwarted struggles toward a resolution, the movement is both exhausting and exhilarating, a veritable novel of cataclysm and recovery and capitulation to the inevitable.

The brasses sounded warnings and offered solemn hymns. The strings soared and snarled furtively. The percussion thundered and tinkled. The two great hammer blows, on a giant structure that rose above the players, were delivered with an enormous hammer from the loge level above, sound and sight merging in a theatrical flourish.

Not all of the movement seemed fully integrated, but again Thomas was stretching, as if for this symphony’s wild, unfathomable qualities that can never be fully realized. And that was the absorbing drama of the evening — a climb toward the unknown.